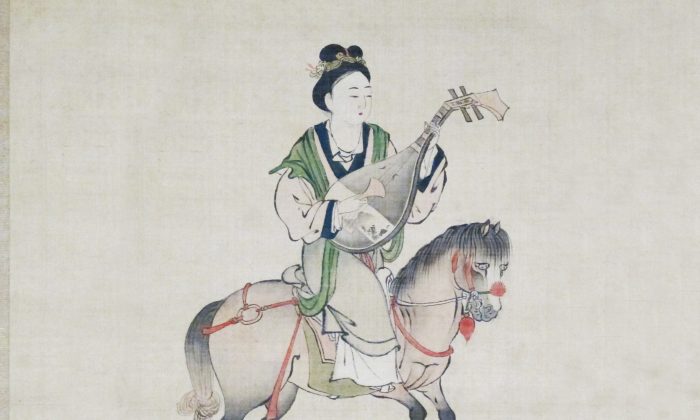 The Xiongnu were a group of nomadic tribes living north of the Great Wall. Ancestors of the modern Mongols, thousands of years ago they made incursions into China on horseback, laying waste to the towns and villages of the sedentary, agrarian Chinese civilization.

Hundreds of years before Attila’s hordes ravaged the Western Roman Empire, China’s Han Dynasty (206 B.C.–220 A.D.) was locked in never-ending struggle with the enemy from the steppe.

But when the war stopped and friendly ties between the Han and Xiongnu were established for half a century, it was not accomplished by force of arms, but through the charm and sacrifice of one woman, Wang Zhaojun.

Wang Zhaojun lived about 2,000 years ago and served as a concubine in the Han imperial court during the reign of Emperor Yuan. As was the case with many prestigious Chinese rulers, Emperor Yuan maintained a harem of thousands of palace women, most of whom never got to see the Son of Heaven up close, let alone become intimate with him.

Emperor Yuan had artists paint portraits of all his court ladies so he could look through them at his leisure. Many of the women, each wanting to win the emperor’s favor for herself, bribed the artists so that they would depict them more beautifully. The artists made quite a lot of money off of this habit. In the end they even expected such “tips” as a matter of course.

Wang, however, was above using money to buy the beauty she already possessed. This angered her painter, Mao Yanshou, who deliberately drew her to look ugly. Her extraordinary appearance and talents were overlooked, and Wang Zhaojun remained an ordinary court lady.

Emperor Yuan Gives Away A Beauty

Years passed before the chieftain of a Xiongnu tribe, the Shan-Yu Khukhenye, entered China, not to raid or sack, but in peace. His clan, having many years prior pledged allegiance to the previous Han emperor, now rose to primacy among the Xiongnu peoples. Now he had a special request: to marry a Chinese princess and become a member of the imperial family.

The emperor was not willing to entertain the prospect of allowing what most Chinese saw as barbarians mix with royal blood, but sorting through his collection of palace girl portraits, Emperor Yuan picked out a more appropriate match for the Xiongnu chief—the “plain” Wang Zhaojun.

Another version of the story says that Wang volunteered for the role, and the emperor approved based on the painter Mao Yanshou’s unflattering depiction of her.

Before Emperor Yuan was an absolute beauty whom he had just condemned to the steppe.

It was only when Wang Zhaojun arrived before Emperor Yuan in the imperial court for her parting ceremony that the ruler of China realized the trickery of his court artists. Before him was an absolute beauty whom he had just condemned to the steppe.

The emperor was torn. At stake was at once the continued alliance between the Han Dynasty and the Xiongnu tribes, as well as the monarch’s integrity. The Shan-Yu Khukhenye was overjoyed to receive such a delightful maiden as his bride, and together they crossed the Great Wall.

Later artists depicting Wang Zhaojun often portray her on horseback, wearing a red fur-lined coat and playing a pipa (a traditional Chinese stringed instrument) as she makes her famous journey to the Mongolian plains.

Peace in Her Time

Despite their peoples normally being adversaries, the Xiongnu welcomed Wang with open arms. She gave birth to two sons and a daughter with the tribal leader. When Khukhenye died, his son by his first wife took power according to local custom. Wang Zhaojun was remarried to the new Shan-Yu, even though in Chinese culture this was considered inappropriate, since he was her stepson.

Nevertheless, the couple had two daughters and Wang lived undisturbed until her death in 8 A.D. Her burial ground, located in what is now Inner Mongolia, is said to have green grass growing on it all year long, earning it the title “Green Tomb.”

Wang Zhaojun is celebrated for her honesty and sacrifice.

Through Wang Zhaojun’s marriage, the Xiongnu and Chinese enjoyed a long period of peaceful relations. However, even though China was at peace with her neighbors, all was not well within. With the death of a certain emperor, the rebellious official Wang Mang rose up against the royal family and threw the empire into turmoil. He was defeated and the Han Dynasty continued for another two hundred years, but the turmoil brought about by Wang Mang’s rebellion damaged the delicate peace the Han empire had maintained with the nomads.

Wang Zhaojun is considered one of the Four Great Beauties of Chinese history, along with Xi Shi, Diaochan, and Yang Guifei. Unlike the other three, who are traditionally known as femme fatales (if more due to the rulers who lusted over them with tragic results), Wang Zhaojun is celebrated for her honesty and sacrifice. She is seen as an embodiment of ancient Chinese civilization’s coexistence with and harmonizing influence on foreign cultures.