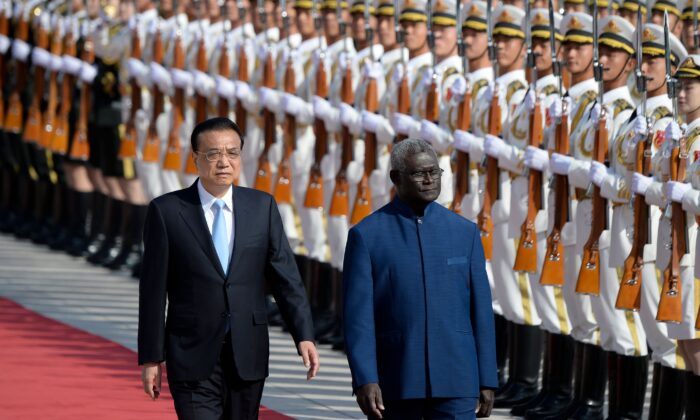 How One Renegade Province in the Pacific Is Standing Up to Beijing’s Pressure, Bribes, Belt and Road

In September 2019, two Pacific nations—the Solomon Islands and Kiribati—decided to drop diplomatic recognition of Taiwan in favor of the People’s Republic of China (PRC). The move was the latest step in the Beijing regime’s continuing efforts to chip away at Taiwan’s international standing.

In the face of the Solomon Islands’ national government’s decision, Daniel Suidani, the premier of the Islands’ most populous region, Malaita Province, has continued to stand firm in his support for Taiwan, despite pressure from federal colleagues and Beijing.

“What we have seen with the PRC’s involvement in other countries in the region is that everything looks quite good at the start, but at the end of the day, the countries eventually find it difficult to handle the problems that come with dealing with China,” he told The Australian.

Upon winning the provincial election in June 2019, Suidani said he was approached by agents acting on Beijing’s behalf and was offered 1 million Solomon Island dollars (U.S. $125,200) to switch allegiance to the PRC from Taiwan.

“I received the offer by phone, and they told me where they were and said they wanted to meet with me to discuss it,” he said. “I knew I needed to take a strong stance against such an offer, and I drove to where they were staying so I could tell them that I do not accept.”

“When I arrived, I made up my mind that it is not right for me to even go up and see them. I called and said I was not for sale and they should keep their money.”

Suidani said he wasn’t able to comment on whether other politicians received bribery offers, but if Beijing was willing to approach him, then it was likely other leaders were being propositioned. He believes the PRC may have helped fund election campaigns for parliamentarians, which may have spurred the national Parliament’s decision to switch diplomatic recognition.

Just a month after the diplomatic switch occurred, Suidani, with fellow leaders’ support, launched the Auki Communique, rejecting the Chinese Communist Party’s (CCP) ideology and its Belt and Road Initiative.

“Let us remind ourselves that China or the PRC is no ordinary country like many other countries of the world. They have a global ambition to dominate the world,” he told a crowd at the provincial assembly.

“For instance, China overwhelmingly targets destitute countries like Solomon Islands that cannot pay their debts and loans. China has confiscated parts or entire seaports from countries that are unable to pay their debts.”

In June 2020, during the initial outbreak of COVID-19, Suidani approached Taiwan for assistance in its pandemic response.

The move sparked a strong response from the Solomon Islands foreign affairs minister and the local Chinese embassy, particularly for referring to Taiwan as the Republic of China, which implies that the island is a self-governing entity separate from Beijing.

“Such divisive statement from a provincial premier threatens the unity of the country at a time when we need to work together in keeping COVID-19 from entering our borders and not politicize the virus,” Foreign Affairs Minister Jeremiah Manele said in a statement.

A spokesperson from the Chinese embassy responded with the statement, “The claims and actions by the Malaita provincial leaders are illegitimate, inappropriate, and entirely wrong. It breaches the sovereignty and territorial integrity of China and hurts the national feelings of the Chinese people.”

Days later, Suidani told The Australian that the federal government seized a shipment of medical supplies from Taiwan, calling it an “act of defiance.”

With the Solomon Islands and Kiribati choosing to align with Beijing, the remaining South Pacific island nations to retain diplomatic relations with Taiwan are Tuvalu, Nauru, Marshall Islands, and Palau.

Efforts to isolate Taiwan on the diplomatic world stage come as Beijing continues its soft power push into the region via propaganda, foreign aid, and infrastructure investment under the Belt and Road Initiative (BRI).

The BRI is Beijing’s trillion-dollar, global infrastructure funding scheme that has been criticized for leaving developing countries laden with debt.

The United States and Australian governments have responded to Beijing’s efforts in the Pacific with their own counter-initiatives.

Taiwan Foreign Affairs Minister Joseph Wu has warned that Beijing could eventually militarize the South Pacific beyond foreign aid and diplomatic relations, transforming it into “another South China Sea.”

“I certainly don’t want to see the Pacific turned into another South China Sea, with us one day all sighing that it is too late for us to do anything.”