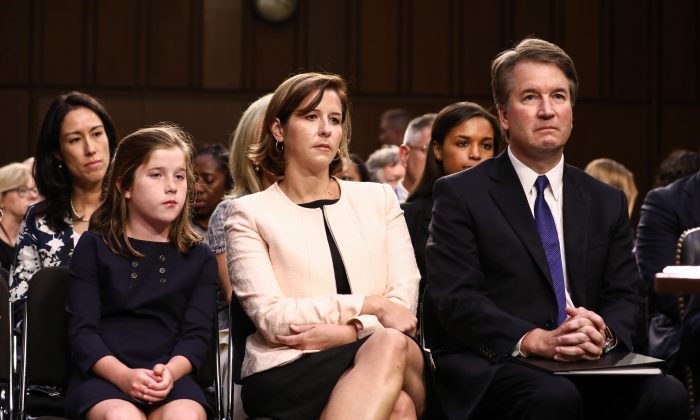 Judge Brett Kavanaugh sits next to his wife Ashley Kavanaugh, and daughter Liza, before the Senate Judiciary Committee on the U.S. Supreme Court at the Capitol in Washington on Sept. 4, 2018. (Samira Bouaou/The Epoch Times)
Viewpoints

How Non-Political Is Debbie Ramirez?

The New Yorker writes: “Ramirez is a registered Democrat, but said that her decision to speak out wasn’t politically motivated and, regarding her views, that she `works toward human rights, social justice, and social change.’ … Ramirez said that she hoped her story would support that of Christine Blasey Ford.”

First, it is a testament to the tragic state of a Yale education that a graduate would emit such cant to describe her “views.” However, it is also revelatory of an animus so all-consuming that it is almost possible Ramirez doesn’t believe herself to be “politically motivated” in “speaking out.”

Ramirez is a highly educated (read: programmed) person; someone who studied (was indoctrinated in) sociology and psychology at Yale.

I went to Yale, too, but I mainly read wonderful books and poetry in the English Department, which was still a possibility in the early 1980s; from what I gather now, there’s barely an “English” Department—too English (white), and too male.

For Ramirez to be in sync with her education (programming) is automatically to hope “her story” would support Ford’s “story.” That’s not “politically motivated,” she might think: It’s just breathing.

Such was my speculation, anyway, based on those two sentences above.

Who would imagine, though, that we would have access to granular details of Ramirez’s continuing political programming? Not I—until I visited the website of the non-profit she works for in Boulder, Colorado: Safehouse Progressive Alliance for Nonviolence (SPAN).

At SPAN, Ramirez is “co-vice chair” of the board and a volunteer. Apparently, that means she “must learn and abide by” SPAN’s “comprehensive code of ethics,” which begins with a set of fundamental guidelines for board members, staff, interns, and volunteers called “non-negotiables.”

This code and its “non-negotiable” guidelines, as well as directions on “ethical communication,” aren’t taken lightly at SPAN. They are prerequisites to employment:

“To ensure the thorough integration of these policies into the day-to-day operations at SPAN, all candidates for SPAN staff positions are provided the ‘non-negotiables’ and ‘ethical communication’ documentation prior to an interview, and questions about these documents are incorporated into the interview process. All SPAN volunteers receive the ‘non-negotiables’ and ‘ethical communication’ documentation during their interview with the volunteer coordinator. Expectations are clearly stated that all staff and volunteers must abide by the SPAN code of ethics.”

Additionally, there’s a required 33-hour training program “designed to enhance participants’ awareness of social justice issues, the dynamics of abuse and to develop greater awareness of the various systems of oppression.”

The “non-negotiables” open by asserting, mantra-like, that “violence against women is systemic”; that “women are an oppressed group”;  that “oppression in any form”—SPAN’s list includes “racism, sexism, heterosexism, classism, cissexism, ageism, ableism, etc.”—is an act of violence.

We mustn’t kid ourselves. What SPAN radicals deem “oppression” and acts of “violence” are exemplified in almost every aspect of the Western tradition, from Sunday school, to husband and wife (also Astaire and Rogers), to Navy SEALs, to Sleeping Beauty’s castle, to all planks of the GOP platform, to all men (of course), and to election results they disagree with.

For example, I’m certain SPAN would label President Donald Trump’s immigration agenda “racism” and “classism”; label the definition of marriage as being between a man and a woman “sexism,” “heterosexism,” “cissexism” (whatever that means); and the physical requirements of special forces  “ageism,” “ableism,” and more.

To SPAN and other radicals, conservative politics and religious beliefs (not to mention logic, law, order, etc.), are all acts of violence.

Where does that leave us all in our “national debate”? Taking cover from the toxic waste bombs as the wild-eyed Left makes its desperate assault on representative government. SPAN radicals such Ramirez are well-prepared for this kind of war in which hysterics replace politics, and slander replaces debate.

Even in this one small nonprofit in Boulder, SPAN, we can see the predicate for the deep psychological disturbances that drive the vicious assault on Kavanaugh, who, unbeknownst to him on the cusp on national glory, became that human bullseye on top of the larger target: our constitutional form of government.

“Non-negotiables”? Like a good Yalie, Ramirez probably has them memorized.