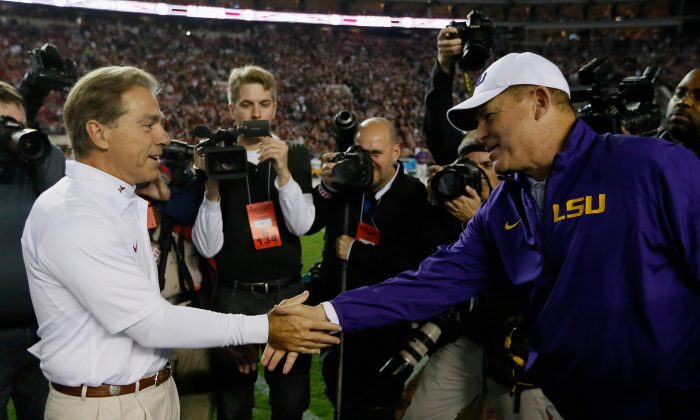 According to numerous reports, Les Miles’s days as head coach at LSU are numbered—as in a number you can count on two hands.

The Tigers head boss has a 110–32 record in nearly 11 years at the school, while winning the prestigious SEC twice, and he has a national championship (2007) to boot. Seven times he’s won 10 games or more (more than any other coach in the program’s 100-plus-year history), and earlier in November his squad was ranked second in the country with the leading Heisman candidate in his backfield.

But LSU has lost three straight games, each by double digits, since then to take them completely out of the playoff talks. This is on the heels of an 8–5 season last year—an unacceptable performance in the eyes of the LSU faithful who’ve grown used to a national contender.

Though he’s averaged 10 wins a season in Baton Rouge, any slip in performance is viewed as the beginning of a downward slide by a guy who inherited his top-flight program from the one and only Nick Saban—still reviled in Louisiana for leaving the Tigers.

Saban arrived at LSU in 2000 and quickly built up the program to national contender status, winning 48 games in five years including the 2003 BCS national championship—the program’s first title since 1958. In fact, his pair of 10-plus-win seasons there matched the number of 10-win seasons the program had seen over the previous 38 years.

But Saban left after the 2004 season for the NFL—upsetting the Tiger fanbase—and Miles was seen as the benefactor of what he left behind—a full cupboard of talent that went 34–6 in Miles’s first three seasons there. His early success made it easy for fans to forget about Saban’s jolting them for a better opportunity.

Saban, though, spent just two years in the NFL before going back to college football and back to the ultracompetitive SEC—and further upsetting LSU’s fanbase—as head coach of their division rival Alabama Crimson Tide. It took just one season for the hard-charging, extremely driven Saban to turn ‘Bama into the national power they once were—and right there with LSU as the major powers in the SEC West division.

Saban hasn’t looked back either, winning three SEC titles, three national titles, and winning at least 10 games in eight straight seasons—including this year’s 10–1 mark. Meanwhile, Miles posted sub-10-win seasons in 2008 and 2009 before reeling off an average of 11 wins a year from 2010 to 2013. But the Tigers are headed for the second straight non-10-win season, and have lost to Saban’s squad five straight times and in 7 of their 10 overall meetings.

Even Miles’s accomplishments at LSU are tainted by Saban’s success.

While the Tigers still have the 2007 and 2011 SEC title banners to display proudly at Tiger Stadium, they both come with some asterisks.

The 2007 title was won during Saban’s first year with the Crimson Tide—a clear rebuilding season—when they were just 7–6. (LSU went on to win the national championship that season—Miles’s third with the Tigers—though some griped that a fair amount of talent on that squad was still inherited from Saban.)

The 2011 SEC championship was earned with an impressive 9–6 win over Saban’s team (at Alabama) in the regular season, but then Saban returned the favor (and then some) with a dominating 21–0 shutout over Miles and the Tigers in the ensuing BCS national championship game.