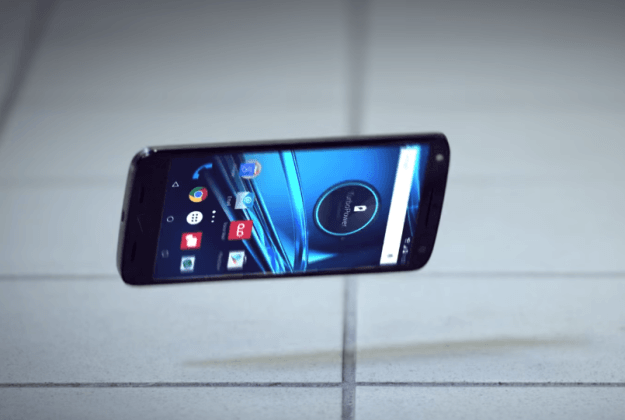 How Motorola Made an Unbreakable Smartphone Display

Motorola this week announced two new Android handsets, the Droid Turbo 2 and Droid Maxx 2. Both devices are supposed to offer superior battery life and great specs, although it’s the Droid Turbo 2 that stands out when it comes to hardware. More importantly, the Droid Turbo 2 has a feature not available on any device from the competition: A shatterproof screen that’s supposedly unbreakable.

DON’T MISS: As a longtime Android user, here are my 3 early gripes about the iPhone 6s

That’s a bold move from Motorola, one that other handset makers including Apple should definitely copy. The ShatterShield screen appears to be more than a marketing gimmick, as Motorola put a lot of thought in this particular feature.

The company is giving the phone a 4-year guarantee against shatters and cracks, and will let you replace the top layer of the ShatterShield system in case you encounter cosmetic issues.

The ShatterShield screen has five layers, Motorola explained in a promo video for the Droid Turbo 2.

From bottom to top, there’s a rigid aluminum core, an AMOLED flexible display, a dual touch layer, an interior lens and an exterior lens.

The flexible display is supposed to withstand shocks better during accidental drops while the dual touch layer offers a redundancy that helps it retain function after a fall. The touch layer is often damaged during drops. The interior lens has a clear protective shield that won’t crack or shatter while the exterior lens has a unique hardcoat protecting it against ordinary wear and tear.

The video below explains each of these layers and the other design tricks that make the Droid Turbo 2’s ShatterShield screen possible.