How Money, Government, and Big Pharma Are Intricately Intertwined 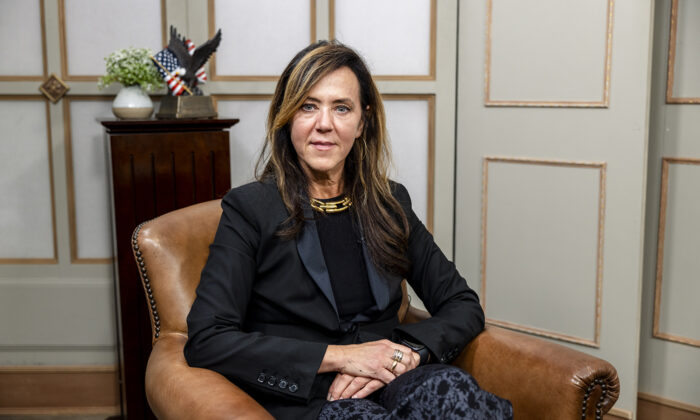 Jan Jekielek
Senior Editor
Jan Jekielek is a senior editor with The Epoch Times and host of the show, "American Thought Leaders." Jan’s career has spanned academia, media, and international human rights work. In 2009 he joined The Epoch Times full time and has served in a variety of roles, including as website chief editor. He is the producer of the award-winning Holocaust documentary film "Finding Manny."
View profile
and Jeff Minick

Jeff Minick
Jeff Minick has four children and a growing platoon of grandchildren. For 20 years, he taught history, literature, and Latin to seminars of homeschooling students in Asheville, N.C. He is the author of two novels, “Amanda Bell” and “Dust On Their Wings,” and two works of non-fiction, “Learning As I Go” and “Movies Make The Man.” Today, he lives and writes in Front Royal, Va.
View profile
biggersmaller
Print

“There’s a systemic problem with our whole drug safety system,” Kim Witczak says. “I like to call it a spider web. That’s the premise I start from. It’s a big business full of conflicts of interest.”

In a recent episode of “American Thought Leaders,” host Jan Jekielek spoke with Witczak, whose beloved husband died from suicide after being prescribed an off-label anti-depressant for insomnia. For the 20 years since then, Witczak has been an advocate for pharmaceutical drug safety and reform, most recently taking up the fight for transparency and accountability surrounding COVID-19 vaccines.

Jan Jekielek: You have a difficult story of how you became a drug safety advocate.

Kim Witczak: I was married to Woody for almost 10 years. We were just starting to think about having kids. And on August 6, 2003, I got a call from my dad who told me, “Woody’s dead.” They said he’d hung himself. The whole thing made no sense.

Woody had no history of depression or any other mental illness. He had just started his dream job with a startup company and was having trouble sleeping. So, he went to his doctor, who sent him home with a prescription for Zoloft, an antidepressant, and told him it would help him sleep. And Woody did what most people do: He trusted his doctor.

When I got that call, I was out of town. The coroner asked me if Woody was taking any medication, and I said yes, but I didn’t know what it was. She found a bottle of Zoloft on the kitchen counter, and I said, “Yes, that’s it.” She said, “We’re going to take it with us. It might have something to do with his death.” Ironically, that same day, our newspaper had an article saying the UK had found a link between antidepressants and suicide in teens.

My brother-in-law Googled Zoloft and suicide, and we were shocked by what he found. We had no idea. Truthfully, we never questioned the drug. Why would we? It was given to him by his doctor. It was sold and advertised as safe and effective, and was FDA approved. But I knew there was no way that Woody, this guy who loved life, would take his own life. And that was the start of it.

I like to call it the battle for Woody. We did a lot of media, told Woody’s story. We had a lawsuit against Pfizer, a wrongful death failure to warn. I met with members of Congress and the FDA. Eventually, there were FDA hearings to get black box suicide warnings, as well as congressional hearings to find out what the drug companies knew about the link between suicide and antidepressants.

Mr. Jekielek: Explain to the audience the meaning of black box warnings.

Ms. Witczak: Black box warnings are the most serious FDA warning. If you look at the inserts that come with your prescriptions, it is literally in a black box on the top of your prescription. It alerts you and your provider of a serious risk with this medication. At the time of Woody’s death, there was no warning.

I remember one situation with Woody. He came walking through our back door wearing a blue shirt completely sweated through and dropped to the floor with his hands around his head like a vise. He said, “Kim, I don’t know what’s happening to me. It’s like my head’s outside my body looking in.” He’s just rocking back and forth bawling. It turned out he was having an adverse reaction, one of the side effects the company kept from the public and the doctors.

Mr. Jekielek: You played an important role in getting these warnings more publicized and available. Give me a picture of how you viewed the health industry prior to COVID.

Ms. Witczak: There’s a systemic problem with our whole drug safety system. I like to call it a spider web where you start seeing how the industry is really a business. And I think that’s the premise I start from. It’s a big business full of conflicts of interest. It’s set up to sell products. Even during the FDA approval process, there’s so much focus on getting things to market and not so much looking at the harms of medication.

Mr. Jekielek: Over the past 20 years, you’ve worked on safety related to psychiatric drugs. With COVID, what happened to the journalists that had been helping you expose this?

Ms. Witczak: I’ve worked with major news outlets for a long time, and I would’ve loved to have seen safety reported on. After December of 2020, we had the Times reporting the vaccines as 100 percent effective, 99 percent effective, but that gives a very different picture than “but we don’t know about the safety.” You’re getting the side that’s coming from pharma and the government, but you’re not getting the full story.

Mr. Jekielek: Right from the beginning, the CDC was collecting safety data and adverse effects. Eight hundred thousand is a pretty large number of adverse effects reported. Given the v-safe data now coming out, what should have been done?

Ms. Witczak: A true journalist should have been asking, “Where’s the safety?” When there are different views or data coming out of Israel or the UK, why aren’t you curious to find out what they’re seeing?

I’m thankful for The Epoch Times, because they are doing investigative journalism, asking the tough questions about safety. And the alternative media’s doing it. But the average person doesn’t learn those things.

There was no debate. It was, “This is the science.” But how can it be settled when it was so new and we’re still in the process and still learning? How is it settled, especially when all these different studies are coming from around the world? We should hear from other scientists, not just Dr. Anthony Fauci and the NIH.

More injuries and deaths have been reported with this vaccine than any of the other ones. That should be a signal to tell the public, “We’re looking at the data, and here are some things we’re seeing.”

Mr. Jekielek: You serve on an FDA board. What does that mean?

Ms. Witczak: I’m the consumer rep, so I represent the public on the FDA’s Psychopharmacologic Drugs Advisory Committee. It’s an advisory board like the ones that were reviewing the vaccine. This one is for psychiatric drugs.

It’s an eye-opening experience to see drugs coming to market, how they’re using fast tracking mechanisms, which is kind of what the emergency use authorization was. A whole slew of new drugs are using accelerated approval, which you think is an innovation breakthrough. What it really means is less rigorous clinical trials and less focus on safety.

Mr. Jekielek: What is the level, based on your experience, of the pharmaceutical industry’s capture of these institutions?

Ms. Witczak: I go back to “follow the money.” For example, there’s the user fee program. With every application, the drug company pays a fee. So now I think more than 50 percent of the FDA budget actually comes from the pharmaceutical industry. Pharma says, “We’re paying you, FDA, so here are our demands.” And the consumer perspective doesn’t really get a say in that.

Mr. Jekielek: The consumer interest doesn’t have a say?

Ms. Witczak: The initial negotiations happen behind closed doors. The people that represent the public interest should be a part of these meetings, but everything is always about privacy. I’ve heard that privacy thing forever. But we need to have a seat at the adults’ table and not the kids’ table, like at a Thanksgiving dinner.

Mr. Jekielek: We’ve gotten your feedback in the paper about things like the government’s refusal to provide key COVID-19 vaccine safety analyses. We have White House health officials clearly making false claims about COVID-19 vaccines and safety. This withholding of information seems to happen again and again, especially when it relates to safety.

Ms. Witczak: I sound like a broken record, but safety signals belong to the public. If somebody sends reports into the VAERS [Vaccine Adverse Event Reporting System] or MedWatch, which monitors prescription drugs, that they want a safety incident investigated, that’s a signal. They want it looked at. This information could be the difference between life and death for somebody else.

I will never understand why a public health agency would withhold safety data from the public. Are we going to trust our public health officials? Our regulatory agencies? Will people trust who’s in charge?

Mr. Jekielek: Well, Kim, I love seeing you referenced as an expert in our articles and some of our investigative work. Any thoughts as we finish up?

Ms. Witczak: I do this work because I don’t want any other family to have to learn the hard way like I did. So, don’t be afraid to ask questions. Do research. Listen to programs like this one. Educate yourself, because it could mean the difference between life and death.

Jeff Minick
Jeff Minick has four children and a growing platoon of grandchildren. For 20 years, he taught history, literature, and Latin to seminars of homeschooling students in Asheville, N.C. He is the author of two novels, “Amanda Bell” and “Dust On Their Wings,” and two works of non-fiction, “Learning As I Go” and “Movies Make The Man.” Today, he lives and writes in Front Royal, Va.