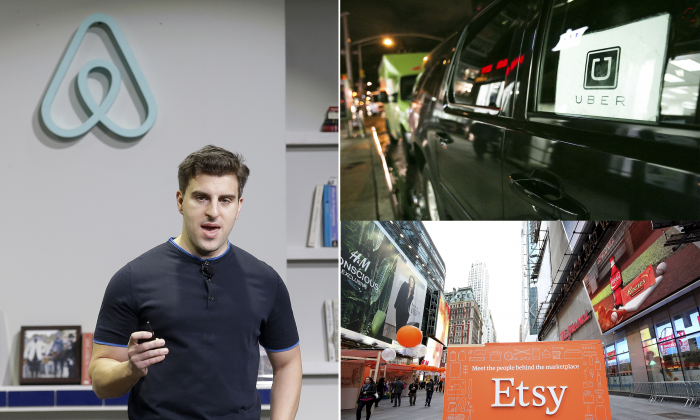 How Mega-Startups Got Their First Customers

Uber, Etsy, and Airbnb all applied the same strategy and succeeded
By Emel Akan

Startups often struggle to attract their first customers. It’s even more challenging for sharing economy platforms that connect customers with service providers. So how do the billion dollar unicorn companies set themselves apart?

Thales Teixeira, an associate professor at Harvard Business School, analyzed the best known and most successful startups—Uber, Etsy, and Airbnb—and found some common traits in how these businesses attracted their first 1,000 customers.

It’s not just the chicken and the egg, you also want to select the right eggs.
— Thales Teixeira, Harvard Business School

“When you have a two-sided platform, you have to acquire both the customers and the services. It’s the classic chicken-and-egg problem,” Teixeira stated in an article published on the school’s website in July.

“You can’t have one without the other, but which one do you find first—the customer chicken or the service egg?”

A startup cannot afford to focus on both and hence needs to prioritize one side, according to Teixeira.

All three platforms concentrated on getting the service side of the equation first, customers second. But there’s a catch: “It’s not just the chicken and the egg, you also want to select the right eggs,” Teixeira said.

“If you acquire the wrong eggs and ostriches come out, then you are in trouble. The chickens will run for the hills.”

Entrepreneurs are often advised to think like a customer, not like a businessman. To walk in customers’ shoes or to get inside their heads is easier said than done.

However, Airbnb founders Brian Chesky and Joe Gebbia succeeded in thinking like customers themselves. It didn’t take them long to figure out where they would go if Airbnb didn’t exist: Craigslist.

Poaching customers is something all competitors do in different ways.
— Thales Teixeira, Harvard Business School

The entrepreneurs figured they could do a better job than the online classified site. Chesky and Gebbia created software to extract the contact info of property owners from Craigslist, then sent them a pitch about listing on Airbnb as well.

That is how Airbnb created its first homes to attract customers.

“Poaching customers is something all competitors do in different ways,” said Teixeira in the article.

It’s not enough to just take someone else’s customers, though, he warned—you’ve got to give them a better experience as well.

The Airbnb founders realized they had a problem with property owners.

“The first time a person goes on Airbnb, they are comparing the quality of photos to hotels that take glamorized shots,” said Teixeira. “[Airbnb] needed to compete at that level.”

So Chesky and Gebbia came up with a unique idea: They hired professional photographers to go to property owners’ homes to take great pictures. The strategy worked, making the site much more attractive than the competition’s. This also set a standard for photography that later property owners rose to match in order to compete against other homeowners.

That’s why you get the supply side first—if you get the right suppliers, the customers will experience their high-quality service and then do the marketing for you.
— Thales Teixeira, Harvard Business School

Ride-hailing app Uber pursued a similar strategy. They launched the business first with black cars driven by professional drivers. That way, they could ensure that customers would have a great experience and spread the news by word-of-mouth.

“That’s why you get the supply side first—if you get the right suppliers, the customers will experience their high-quality service and then do the marketing for you,” said Teixeira.

Etsy also focused on finding the right eggs. The platform, which serves as an online marketplace for craft vendors, started its business by first identifying the best vendors at craft fairs across the country and pitching to them on opening up an online store on the site.

Uber and Airbnb were also smart about how they chose to grow.

Since Uber’s first competitors were the regular taxi cabs, the startup researched which cities had the biggest discrepancy between supply and demand for taxis. They then launched during the holidays, when people tend to stay out late partying. Uber also ran promotions during large concerts or sporting events, when big crowds of people all needed cabs at the same time.

In these ways, the company acquired a large group of customers in one swoop.

The company banked on the fact that once users realized how easy it was, it was only a matter of time before they started using it to go to work, then shopping for groceries, and so on.

Airbnb followed a similar strategy with its rollout. It launched in Denver in 2008 to coincide with the lack of hotel space during the Democratic National Convention and added new cities at times when they had major conventions or other events.

“The question only makes sense when you say, ‘I am at this stage, what approach should I take?’ Only when you answer that question will you know what tool is most appropriate,” said Teixeira.

“You need the right size of eggs for each stage of your nest.”