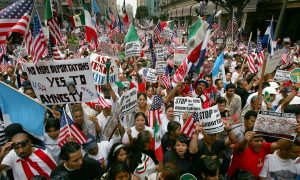 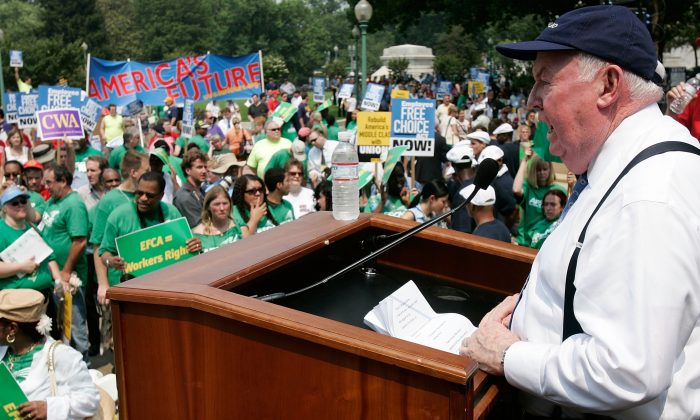 How Marxists Took Over the American Labor Movement

Despite taking second place to the “mainstream” media, and the stiff competition from Hollywood, academia, and leftist churches, organized labor is still a major “transmission belt” for communist ideas to the American “masses.”

This wasn’t always the case. For many years, labor in the United States was staunchly anti-communist. However, since 1995, American unions have largely fallen under Marxist control. This gives the far left the political muscle to implement socialist ideas through the Democratic Party—even when these policies clearly damage union members’ interests.

The father of the Bolshevik revolution, V.I. Lenin, prophetically said of the trade union movement, “It is an organization designed to draw in and to train; it is, in fact, a school: a school of administration, a school of economic management, a school of communism.”

In the early days of American communism, the Communist Party USA (CPUSA) showed little interest in the labor movement. In those days, American unions tended to be craft-based and fairly conservative. The communists just didn’t think they had much revolutionary potential. But in 1921, the American communists’ Soviet masters set them straight.

On direct orders from Moscow, the CPUSA established the Trade Union Educational League as the U.S. affiliate of the Profintern, the Soviet-created Red International of Labor Unions. Progress was slow but steady through the 1920s and ’30s as the CPUSA began to infiltrate and initiate new labor organizations, both within and outside the “orbit” of the dominant union body in the country, the American Federation of Labor (AFL).

When miners’ union leader John L. Lewis established the forerunner to the more left-wing Congress of Industrial Organizations (CIO) in 1935, in competition to the AFL, the communists climbed on board.

The CIO supported President Franklin D. Roosevelt and his massive expansion of federal power known as the “New Deal.” In July 1943, the CIO established the first political action committee in the United States, the CIO-PAC, to help Roosevelt’s election. In contrast, the AFL was far less partisan, being more willing to work with either main party to get a better deal for its members.

The CIO came under pressure in the late 1940s as Americans started waking up to the massive Soviet-directed communist infiltration of their government and institutions.

Robert R. McCormick, publisher of the Chicago Tribune, claimed that the communist-infiltrated CIO had become the dominant faction in the national Democratic Party:

“They call it the Democratic national convention but obviously it is the CIO convention. Franklin D. Roosevelt is the candidate of the CIO and the Communists because they know if elected, he will continue to put the government of the United States at their service, at home and abroad. … The CIO is in the saddle and the Democrat donkey, under whip and spur, is meekly taking the road to communism and atheism. …  Everybody knows that Roosevelt is the Communist candidate.”

In 1946, the Republican Party took control of both the House and Senate. That Congress passed the Taft-Hartley Act, which, among other things, made all union officers sign an affidavit declaring that they were not communists if the union wished to bring a case before the National Labor Relations Board.

Over the next few years, hundreds of communists were purged from the U.S. labor movement, until, when sufficiently “cleansed,” the CIO was allowed to merge with the AFL in 1955 to form what we now know as the AFL-CIO.

For nearly 40 years, American labor remained under conservative and patriotic leadership. That is, until the over-optimistically named “collapse of communism” convinced the U.S. public that “communism” was no longer a threat.

Around 1994, American Federation of State, County, and Municipal Employees President Gerald McEntee approached the AFL-CIO with his idea for “Project ’95,” a coalition effort aimed at retaking the House for the Democratic Party. Moderate AFL-CIO President Lane Kirkland turned down the proposal, wishing to keep the door open to some Republicans. McEntee and fellow DSA supporter John Sweeney of the Service Employees International Union immediately began plotting Kirkland’s removal.

“In short order, they amassed support from a coalition that included not just the core of the old CIO (the Auto Workers, Steelworkers, Mine Workers), but the Machinists, Ron Carey’s new-model Teamsters, the Carpenters, and the Laborers. And what began as somewhat inchoate dissatisfaction among top labor leaders with the Big Sleep of the Kirkland era evolved in the course of the year to potentially the most profound reshaping of labor since the founding of the CIO.”

Sweeney formally joined the DSA just before the union elections and went on to oust Kirkland to become president of the AFL-CIO.

According to the Democratic Left article by DSA member and former Washington Post journalist Harold Meyerson, the “progressive coalition” of labor unionists who ousted Kirkland in 1995 was led by McEntee, Richard Trumka, and George Kourpias. McEntee and Trumka (the current AFL-CIO president) were both longtime DSA supporters. Kourpias was a confirmed DSA member.

According to Workers World, “After his victory, Sweeney called a number of high-level meetings with women’s organizations, such as the [CPUSA/DSA-led] Coalition of Labor Union Women, as well as establishment civil rights organizations, and met with the leadership of numerous central labor councils in different cities.” The aim was to build bridges across the American left, to create a unified mass front against the Republican Party.

According to the CPUSA’s People’s World:

“Kaufman had been nominated to represent the retiree council on the executive committee of the North Shore AFL-CIO Federation of Labor, but said he could not accept due to the anti-Communist clause. This caused an uproar with protests being sent to AFL-CIO President John Sweeney. At the following AFL-CIO Convention, the clause was quietly removed. The Painters and most other unions then followed suit removing similar provisions in their constitutions.”

Militants from the 1960s, 1970s, and 1980s communist, socialist, and student movements flooded into organized labor.

“More DSA members and alumni of DSA’s Youth Section are moving up through the administrative and organizing reaches of AFL-CIO international unions, and global labor solidarity groups, than ever in recent memory.”

With this support came strings. All over the country, the Marxist unions imposed their candidates and policies on what little was left of a once vibrant and patriotic Democratic Party. The unions helped the Democrats win elections.

In an essay in the same issue of Democratic Left, Meyerson wrote:

“The differences here are magnified because the strategic importance of unions in American politics has increased almost exponentially since John Sweeney took the helm at the AFL-CIO in 1995. It’s the unions that have brought the Democrats back to brink of retaking Congressional power.”

But it was a devil’s bargain. The further left the Democrats went, the smaller their traditional base became—the more they needed union help—the more far-left they veered. It’s a vicious cycle of destruction that is now almost impossible to reverse.

That’s why the Democrats and their union and Marxist masters are so fixated on securing amnesty for the 20 million-plus illegal immigrants now in this country. The Democrats have so destroyed their traditional base that they can now only win by importing millions of new voters from south of the border.

As late as the mid-1990s, both the Democrats and the unions vehemently opposed illegal immigration. They rightly saw that illegal workers would undercut U.S. workers and undermine union organizing.

In 2000, at the AFL-CIO’s national convention in Los Angeles, Service Employees International Union leader and DSA comrade Eliseo Medina engineered a complete turnaround in AFL-CIO policy toward illegal immigration. Illegal aliens were no longer to be shunned. Democrats would no longer campaign to close the borders. From now on, unions would campaign in support of illegal immigrant amnesty.

Medina revealed the real reason for the about-face at the “America’s Future Now!” conference in Washington on June 2, 2009. Medina addressed the gathered comrades on the vital importance of “comprehensive immigration reform”—a code phrase for amnesty.

“When they [Latinos] voted in November, they voted overwhelmingly for progressive candidates. Barack Obama got two out of every three voters that showed up. …

“[If] we reform the immigration laws, it puts 12 million people on the path to citizenship and eventually voters. Can you imagine if we have—even the same ratio—two out of three?

“If we have 8 million new voters … we will be creating a governing coalition for the long term, not just for an election cycle.”

But now, according to Massachusetts Institute of Technology, it’s 22 million illegal immigrants. In other words, Medina wants to create a socialist one-party state by overwhelming the Republican Party base.

Tough luck for U.S. workers thrown out of jobs or living on incomes much lower than they were accustomed to. The Marxist-led unions don’t care about workers—they only care about revolution and raw power.

American union members are now being asked to accept the DSA-originated Medicare for All, which would put most of them in endless waiting lines for the most routine operations. They’re also being commanded to accept the Marxist Green New Deal, which would completely destroy America’s industrial base, which provides their jobs, and the U.S. military, which guards their freedoms.

Today’s Democratic Party is the tool of the unions. Today’s unions are controlled by revolutionary Marxists. Millions of veteran-supporting, gun-owning, stars and stripes-loving, patriotic union members are being led into socialism by their treacherous anti-American leadership. And they may drag all of the rest of us to hell with them.

That’s why Donald Trump Jr. was correct when he recently stated that the 2020 election would be “about communism versus freedom.”