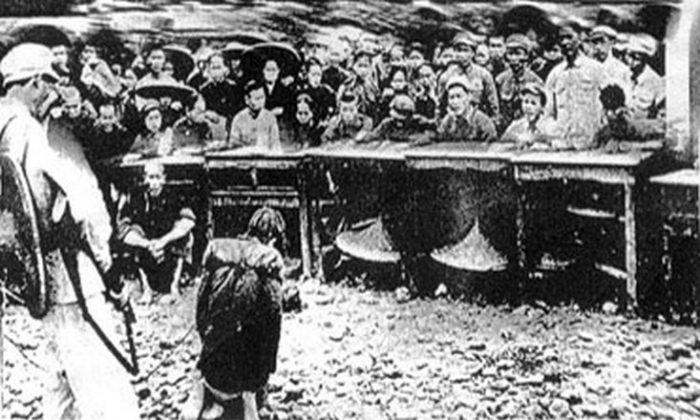 ‘People’s Courts’ were held in which peasants were encouraged to accuse the landlords; sometimes, this resulted in immediate executions (Public Domain)
The Dead End of Communism

The word for today is “classicide,” which means “extermination of a class” rather than ethnicity, race, or religion.

The term is aptly applied to an unknown, under-reported period in Chinese history that started in the late 1940s and ended in the early 1950s. Right before Chinese Communist Party leader Mao Zedong took power, a Mao associate in 1948 proclaimed the Communist Party’s intent: “30,000,000 landlords and rich peasants will have to be destroyed.”

Mao, unlike the Soviets—who used NKVB/KGB forces to carry out political persecutions—mobilized the Chinese peasantry itself to kill landlords and other perceived privileged classes. It came in 1946 after Mao’s communists won the hearts of millions of Chinese poor and upper-class peasantry, launching a land reform campaign. However, there was one obstacle that stood in the way of their land redistribution efforts: the owners of the land.

Mao, in 1949, was accused of being a dictator, but Mao said that was the intent. “My dear sirs, you are right, that is just what we are,” he wrote, according to China File, a project of Center on U.S.-China Relations at Asia Society. According to Mao, communists in power can be dictatorial against “running dogs of imperialism,” “the landlord class and bureaucrat-bourgeoisie,” and “reactionaries and their accomplices” who were associated with the opposition Kuomintang. Of course, the communists decided who would qualify as a “running dog,” a “reactionary,” or even a “landlord.”

According to China File, “landlords” was merely a convenient label pushed by Mao and the communist party:

There were no landlords there, just peasants, some of whom were richer than others. The violence that erupted was not spontaneous, but carefully orchestrated. For several weeks, people were whipped up into a frenzy by Party cadres in public rallies, then armed with sticks, hoes, or even guns, and unleashed on those who had a little more education, or a bit more land, or a slightly nicer dwelling.

In this type of mob savagery (think of what happened to Jews in Polish villages under Nazi rule), greed, envy, and personal resentments are useful human instincts for officials to exploit. Since class categories were often so arbitrary, and the instigators of violence usually came from the outside, people were in effect set upon one another, friends upon friends, children upon parents. This was the point of the exercise. Through organized violence, the Party made everyone complicit in the mayhem it stirred up. The aim was to tear apart the fabric of traditional Chinese life, leaving the Party as the only permitted focus of loyalty and authority.

According to historian Frank Dikötter, who has painstakingly chronicled Mao’s brutality: “Many of the victims were beaten to death and some shot, but in many cases they were first tortured in order to make them reveal their assets—real or imagined.”

It’s unclear exactly how many died, according to R.J. Rummel in “China’s Bloody Century: Genocide and Mass Murder Since 1900,” but he posits that some 4.5 million landlords and relatively well-off peasants died in the land reform campaigns. Short, meanwhile, estimates that possibly 1 million landlords and their families were killed, but the death toll “may have been two, possibly three times higher.”

Rummel’s death figure, he said, is supported by individual reports, including one from a Catholic school teacher from a small village of around 800, who said 20 landlords were executed. A Chinese Communist official estimated that as many as 190,000 were executed in Guangxi Province. Mao himself claimed that only 800,000 landlords and rich peasants were killed.

Regardless of how many died, “within three years of the founding of” communist China, “landlords as a cohesive class, which had dominated rural society” since the Han Dynasty more than 2,000 years ago, “had simply ceased to exist,” Short said.

Classicide was just one of the many methods Mao and subsequent Chinese Communist Party leaders used to target groups in various land-grab campaigns.