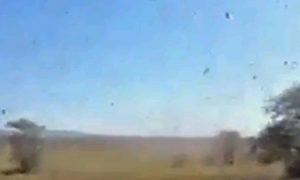 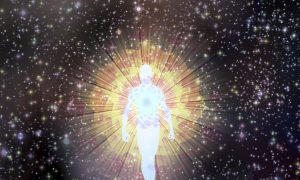 How the Human Body Is Affected by the Cosmic Environment
0 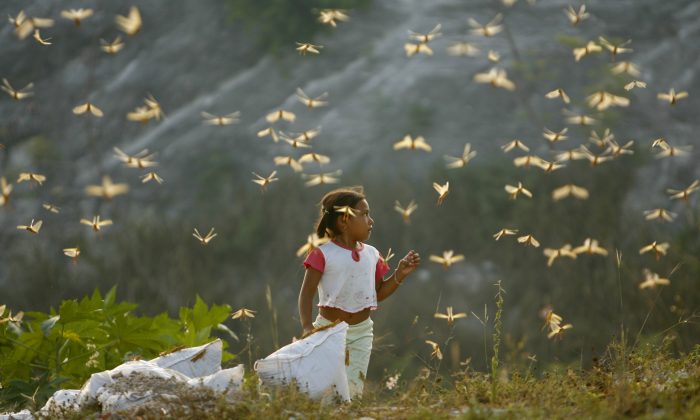 ** FOR USE WITH YEAR END--FILE **Diana Rubi Pech Dzu, 4, walks among a cloud of locusts in the city of Cancun, Mexico, in this Sept. 25, 2006, file photo. A locust plague invaded the outskirts of this resort city. (AP Photo/Dario Lopez-Mills/FILE)
Science

From the Biblical plagues of Egypt to a major infestation in Madacasgar two years ago, locust swarms have caused chaos throughout history. Just one swarm can cover 20 percent of the land surface of the Earth, affecting the livelihood of 10 percent of the world’s population by consuming up to 200 tonnes (about 220 tons) of vegetation per day. Understanding how swarms form and what can break them apart, then, is of great importance.

But how many locusts does it take to make a swarm? It sounds like the start of a bad joke, but understanding and controlling locust plagues is something we’ve been striving to do for thousands of years. If we can understand what makes a swarm, hopefully we can understand how to stop it. This is exactly what our international research team tried to do—and the results are in. The answer is just three.

Our study, published in Physical Review E, used mathematical modeling to tackle the problem. We managed to show that a locust in a swarm must be able to interact with at least two neighbors simultaneously. Without those two neighbors, the insects can’t reproduce the striking spontaneous changes in direction we are used to seeing in flocks of starlings, schools of fish—and swarms of locusts.

The finding adds to our previous observation of how locust swarms can be so stable. By watching locusts move around a ring, we identified some interesting behavior. Small numbers of locusts move around the ring at random, but larger groups start to march together in the same direction. These groups will then spontaneously switch to march in the other direction. The more locusts in a group the longer the time interval between switches and the more stable the swarm.

We were able to reproduce this behavior in a mathematical model—and discovered that locusts move more randomly when they don’t have near neighbors.

So, forming a swarm is all about neighbors—but that doesn’t make it “neighborly.” The reason locusts pay so much attention to their neighbors is because locusts are cannibals.

The best way for swarming insects to get the protein and salt they need is to eat each other. And that’s bad news for any locust that isn’t watching what its neighbors are up to.

Gruesome experiments on Mormon crickets in the deserts of Utah have shown that locusts are extremely vulnerable to attack from the side. Locusts that are side-on to an oncoming swarm are more likely to be eaten than those positioned with their heads or hind legs facing the swarm.

Consequently, when in a group, any locust that is out of line with its neighbors will expose its vulnerable flank and face a greater chance of being cannibalized. By being in line, they will be safer—but will also help hold the swarm together.

Breaking Up a Swarm

In order to break a locust swarm apart, then, should we be looking at reducing their cannibalistic tendencies by providing alternative food sources? Probably not. Providing sufficient food for so many voracious appetites, in a coordinated manner, would be a near-impossible task. It may even fuel the progress of the swarm.

Instead, our studies demonstrate how susceptible locust swarms are to randomness. If we can increase the randomness or “noise” a swarm experiences, then we might be able to break it apart. This idea might be harnessed as a swarm-management strategy, using low-flying planes to create atmospheric disturbance to disrupt locusts.

The huge size of swarms, however, make this method impractical, too. A typical locust swarm can cover several hundred square kilometers (100 to 150 square miles). Locusts can fly up to two kilometers in the air (about a mile) and have even been reported to travel over whole oceans. It can comprise tens of millions of locusts, each eating their own weight in food every day. However, we hope that by conducting further research we might find better ways to break up swarms using similar methods.

Locusts Swarm Egypt: Damage Locusts Caused in the Past 100 Years

In the past, management strategies have typically focused on creating exclusion zones—by burning tires to create an exclusion zone, catching them in nets, or digging trenches. At best, these local measures will prevent locusts from reaching a particular area, but can do little to halt the progress of the swarm.

Currently, the most commonly used control is insecticide. Sprayed from land or aerial vehicles, whole swarms can be targeted in relatively short periods of time. However, this has obviously led to some environmental concerns.

However, one of the most effective ways to avoid the devastating effects of locust plagues is to prevent them from happening in the first place. Considerable resources are allocated to early warning and preventative control strategies. Locust monitoring stations collect data on weather, ecological conditions, and locust numbers, making forecasts of the timing and location of breeding.

Despite these efforts, West Africa faced one of its largest locust outbreaks in 2003–2005. Cold, dry conditions in the winter finally allowed control agencies to halt the outbreak at a cost of around $400 million and harvest losses calculated at more than five times that amount.

Controlling locust swarms is no easy task. And the larger the swarms, the more difficult the task becomes. Prevention, then, is likely the best medicine, but this requires keeping a very keen eye out. Remember, it only takes three locusts to make a swarm.

Christian Yates is a lecturer in mathematical biology at the University of Bath in the U.K. This article was originally published on TheConversation.com