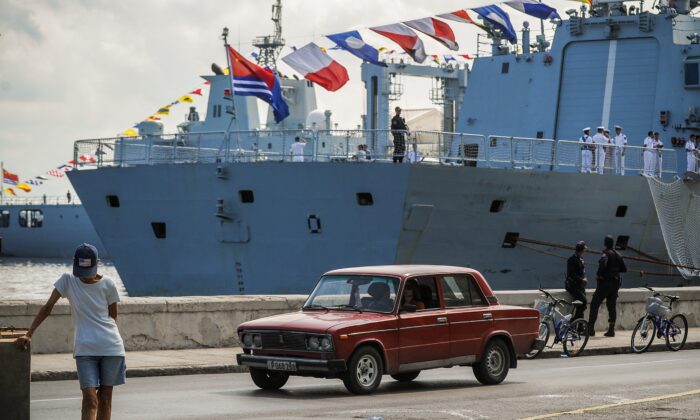 Chinese Navy ship Type 054A frigate 548 Yiyang moors at the port of Havana on Nov. 10, 2015. (Yamil Lage/AFP via Getty Images)
Thinking About China

How Long Until China Controls Cuba?

China’s Belt and Road Initiative (BRI) has hidden risks. It’s a debt trap. Not to mention a data trap.

The dangers of the BRI have been well documented by many authors, myself included. Nevertheless, 142 countries around the world have signed up to the dangerous initiative.

In December 2021, Cuba became the latest country to sign up. Will the Latin American nation come to regret this decision?

On Dec. 26, Global Times, a mouthpiece of the Chinese Communist Party (CCP), published a piece discussing the ways in which China and Cuba will work together on projects such as infrastructure, technology, culture, education, tourism, energy, communications and biotechnology,” which, we’re assured, “are in line with Cuba’s development plans for the short and long term.”

Not only is the CCP planning to reshape Cuba’s infrastructural landscape, it’s planning to reshape the minds of the masses. What have culture, education, and communications got to do with the BRI—an initiative ostensibly designed to promote the construction of bridges, buildings, and roads?

On July 11 of last year, anti-government protests took place in towns and cities throughout Cuba. The protests—which were fueled by a lack of access to basic provisions (including food and healthcare)—turned violent, leaving several people injured. At least 140 Cubans were detained or were disappeared.

Protesters used social media to highlight the brutality of the Cuban regime and the manner in which people were being beaten and bullied. Some protesters called on the U.S. government to intervene.

U.S. Senator Marco Rubio took to Twitter to voice his concerns. He wrote, “Expect the regime in #Cuba to block internet & cell phone service soon to prevent videos about what is happening to get out to the world.” He then added, “By the way, they use a system made, sold & installed by #China to control and block access to the internet in #Cuba.”

Rubio’s final point—concerning China’s ability to manipulate the internet in Cuba—is a particularly interesting one, not to mention a particularly worrying one.

As authors at The Diplomat have noted, “Chinese companies have played a key part in building Cuba’s telecommunications infrastructure, a system the regime uses to control its people, just as the Chinese Communist Party (CCP) does within its own borders.”

In December 2020, the Institute for War & Peace Reporting released a rather telling report. According to the authors, in Cuba, “only one company, the state-owned Etecsa, provides internet access. According to its own corporate magazine, Etecsa’s primary technology providers are three Chinese companies: Huawei, TP-Link, and ZTE.”

Three years before this particular report, the Open Observatory of Network Interference (OONI), a global community dedicated to combating internet censorship, “found traces of Chinese codes in both the surface and the interfaces used for access portals for wifi connections.”

“Ete[c]sa’s login portal,” we’re told, “appears to have been written by Chinese developers, since its source code contains comments written in Chinese. This indicates that Etecsa likely hired Chinese developers to implement the portal.”

Qurium, a Swedish nongovernmental organization dedicated to freedom of speech and internet security, published a report documenting the ways in which Huawei, China’s telecom giant, played a significant role in blocking very specific content in Cuba. The authors detected the “fingerprints of Huawei’s eSight, a network management software for routers, switches and firewalls.”

It’s important to stress that Qurium is an expert in digital forensics, meaning that its analysis—and warnings—are accurate.

It is abundantly clear that China’s involvement in Cuba goes far beyond the construction of various buildings and roads. CCP-backed businesses play an integral role in limiting what the Cuban people see and when they see it. For years, Beijing played a major role in silencing voices throughout the volatile nation. Now, the latest BRI agreement may very well prove to be the final nail in the Cuban coffin.

Will the Latin American nation regret signing a deal with the devil? It depends on who you ask. The tyrants in power will say no; everyday citizens, however, will say yes.