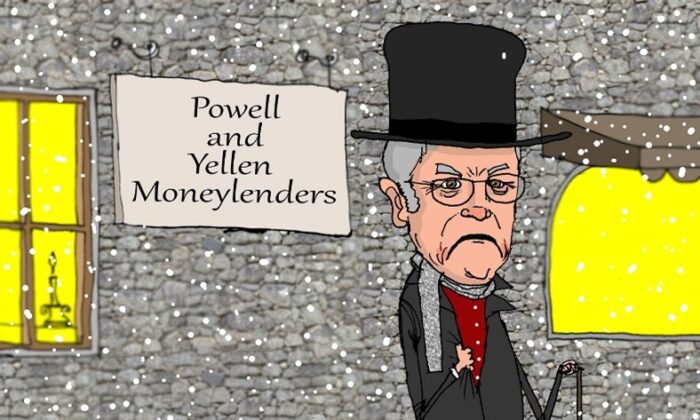 "Its (finally) time to decrease the surplus population of bonds."
Business Columnists

As 2021 was entering its final few weeks, the U.S. stock market had begun pulling back anew. But there has been little sign as of this writing of the previous “buy the dip” inclination. Indeed, that seems to have turned now into “sell the rip” whenever any bounce has materialized.

Though new media-fanned fears over the latest Omicron version of the Wuhan/Fauci virus have added to the woes, it was the Federal Reserve that was most to blame initially for the stock market’s sudden wooziness. Specifically—after so many months of dismissing rising producer and consumer prices at, now, their highest levels of increase since those good old “stagflation” days of some four decades ago—Fed Chairman Jerome Powell seems now resolved to finally play Scrooge.

Mind you, the Fed will still be expanding its bloated balance sheet (in round numbers, exploding to its present $9 trillion from the pre-plandemic $4 trillion) until next February. But then it looks increasingly as if an initial federal funds rate hike could come as soon as March, with at least two others during 2022. Further—though no specific game plan on this has yet to emerge—it’s generally believed the Fed will also allow maturing securities starting in early 2022 to simply “roll off” their balance sheet without being replaced.

Thus, actual tightening of monetary policy in these two fashions is but two or three months away.

There are numerous interesting—not to mention oftentimes very contradictory—aspects as to why Powell has done this most recent “180.” Perhaps the biggest one was evidenced when President Joe Biden nominated Powell for a second term and (to placate his party’s farthest left “progressives”) said he wants to replace current Vice Chair Richard Clarida with progressive heroine Lael Brainard. At that press confab in late November, all three conspicuously highlighted bringing down inflation as a key objective and theme going into 2022 which—ahem—is a mid-term election year.

It takes a Fed watcher of only average intelligence to understand that the “transitory” inflation Powell dismissed for so long has become politically untenable for the imbecile who just renominated this arsonist to put out the raging inferno Powell is responsible for in the first place. Biden (or his handlers), I suspect, told Powell in no uncertain terms to “do something” so that the Democrat Party’s looming November, 2022, beating isn’t even worse thanks to voters sick of soaring prices for most everything.

Biden, after all, has an approval rating so low that, in comparison, if former President Donald Trump were to suddenly be able to take over he would be greeted as was Doug MacArthur returning to the Philippines in late 1944. Millions of Americans who voted for “Sleepy Joe” feel as if they just drove a tricked-out DeLorean back to 1979 or 1980—and, right or wrong, Biden is now blamed for today’s soaring prices as was former President Jimmy Carter back then.

And that is why Powell is suddenly worried about the now-embedded, in several aspects, inflation HE is the main cause of.

I don’t doubt that, belatedly or not, Powell does intend to embark on a substantial—by recent standards, at least—but methodical tightening to bring some of these price pressures back to heel. But I do doubt he will be able to carry this on for very long.

Among other things, other nations and economic/market circumstances alike will be reminding him in the days ahead that the Fed is the de facto central bank of the world. And the global economy apart from the United States is already going back into reverse; notably—as I’ll be discussing further in the days ahead—in China, which is already back in recession and struggling to stave off a full-fledged deflation, if not epic collapse. Europe, likewise, is slipping into contraction once more.

And especially if power-mad policymakers continue using the so-called “Omicron variant” as an excuse for still more Big Brotherism, lockdowns, and more self-imposed economic distress, then Powell’s Scrooge act might be over almost as fast as it starts—if it starts as scheduled.