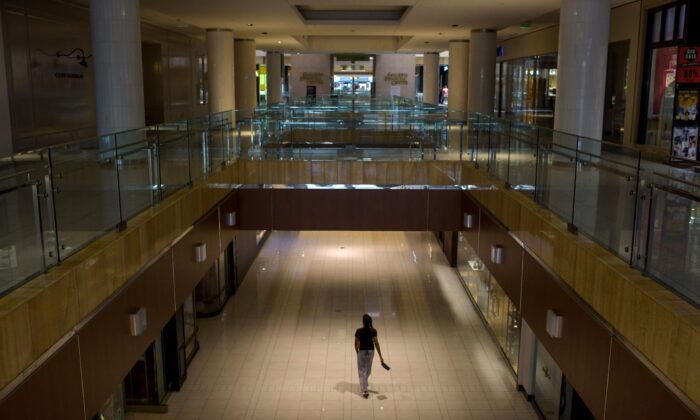 The Galleria shopping center is seen in Houston, Texas, on May 1, 2020. (Mark Felix/AFP via Getty Images)
Business Columnists

For most of these last 100 years, unemployment has been an obsession of both economists and government. This is because it has usually been a reliable marker in the business cycle. In good times, the rate falls and in bad times it rises.

This pattern has often led to a goofy conflation of cause and effect. Policy makers have imagined that if they can make everyone who wants a job to get one, the economic recovery happens on its own.

Put that way, the theory sounds as silly as it is but this ambition drove much of the economic policy of the 1930s, and it accounts for the long obsession with the topic in public life. For that reason, our own times are making a huge mess of all normal assumptions in macroeconomic forecasting. Looking at unemployment alone (3.6 percent), these seem like boom times. Instead, everyone is waiting now with bated breath for the recession to be declared official.

What gives? This will be studied for many years hence, but it’s impossible to understand this without reference to what was surely the worst economic policy in the history of humankind: the forced lockdown of economic life in the name of controlling a respiratory pathogen. This introduced unthinkable chaos in market functioning, not only because of the huge attack on normal enterprise but also because it was left to bureaucrats to divide the entire worker population into essential vs. nonessential.

These designations turned out to be more complex than they first appear. They were made up by elite professionals in government agencies and distributed to the whole population in PDF form. Essential meant of course health-care workers but also grocery workers, plus media professionals plus truckers plus people who are responsible for keeping the lights on, the mail running, and the trash collected. The unessential workers were people employed in hospitality, restaurants, entertainment venues, and so on. Historians will marvel.

In any case, this caused an immediate spike in unemployment, as one would expect, followed by a crash in the other direction once economies opened up. More than anything else, these strange policies split the population by class and type of worker: the physicals vs. the virtuals. The people who type and stare at screens were instructed to stay home to stay safe while everyone else was told to serve society and bravely face the virus. In practical terms, this meant the opening of a huge chasm between white and blue collar jobs.

The chart below chronicles the trauma. It tracks the unemployment rate (people on the market who can get jobs) over the percent change in the people in the population who had jobs. Typically these lines are mirror images of each other. In the course of 70 years, only twice before and very briefly has the percentage change in the number of people working outstripped the unemployment rate. Both previous times, it has been a sign of economic boom. This is precisely what is happening now but it is happening in recession.

This is due mainly to the sheer number of workers who have dropped out from the population. You have surely noticed that this has led to a huge labor shortage. It is only partially accounted for by women leaving jobs to care for children, early retirements, and tremendous demographic shifts of people leaving one state for another. It also reflects an overall demoralization within the pool of the population that had the liturgy of life shattered by forced idleness for the better part of a year or more.

By far, these policies were disproportionately exploitative of working-class populations without college degrees. It was they who experienced an incredible 17.5 percent rate of unemployment following lockdowns.

No question about it: lockdowns were a policy constructed by and for a professional-class population which experienced far less of the pain and suffering. Did Fauci/Birx/Collins even care? Did the “health officials” who did this to us even bother to consider the undemocratic and inegalitarian effects of these policies?

Feast your eyes on the reality: the blue area is the no-college population and the red area is the college-educated crowd.

As a result, the labor force participation rate crashed and has not fully recovered. It is right now back to low levels that we haven’t seen in 1977, nearly a decade before more than half of the population of women with children entered the workforce. Forty years of labor inclusion wiped out with policies wholly approved by the political left! Let’s take an even closer look at what might have been by tracing the trend lines in labor force participation from 2015, a time when the labor markets had finally started recovery from the trauma of the 2008 financial crisis. Here we see that the situation is more dire than it looks on paper. These are jobs that might have existed that were never made real due to pandemic policy. The results are strange by any standard.

Just last night, I was having a martini in a bar that was separate from a restaurant in a Washington, D.C., hotel. The nice man serving me had worked in this place for 30 years and was clearly beyond retirement age. He was serving customers in both the bar and restaurant—and he was doing it entirely alone. There was one cook in the kitchen. My server was glad for the job but he was running around madly simply because the hotel could not find workers that it could afford to hire who actually wanted to work.

And now let’s talk about the elephant in the room: the decline in the work ethic. So many young people have been wildly misled to believe that their first job out of some fancy debt-financed education would be a Zoom position that pays six figures.

Long before the pandemic, this expectation affected people in college who were not only taught that money grows on trees but also that they would never really have to learn a skill to get by. These people simply will not stoop to doing regular jobs, never. They are unbearably entitled and largely without skills and yet they expect the American economy somehow to grant them all a high standard of living.

It’s no wonder that the working class in this country is bitter, resentful, and fed up. They experienced unbearable abuse during lockdowns, faced the virus bravely, and they were abused more by being told to mask up and get their shots. On the margin, many among them are shrugging and it’s totally understandable why.

Now we have an economic environment that is only cosmetically marked by low unemployment but in fact is underperforming in basic productivity amidst a very high inflation rate that is robbing the middle class and the poor of purchasing power. Meanwhile, the entire professional sector is burdened down by a privileged overclass with few skills and very high demands for status and an uninterrupted stream of income plus benefits packages that would have astonished kings of old.

None of this is sustainable. The models that once posited neat packages of aggregates that could be controlled by central planners in Washington, D.C., have all blown up. The lie that government spending and printing could substitute for market functioning has been exposed.

This is why Treasury officials, Fed economists, and administration officials seem so confused and disoriented when they are asked for their plans for how they are going to fix all this. The truth is that they just do not know.

It is not surprising at all to discover that the President of the United States has no clue about economics, as shown by his tweet demanding that gas be sold at its cost of production and no more. The last statesman who believed such things was Nikita Khrushchev. What’s really alarming is that teams of staff at the White House likely had to approve that tweet, revealing that the ignorance is pervasive throughout the whole administration.

These people will not dig us out of this pit. Our labor markets are fixable but not through old-school tactics of command and control.