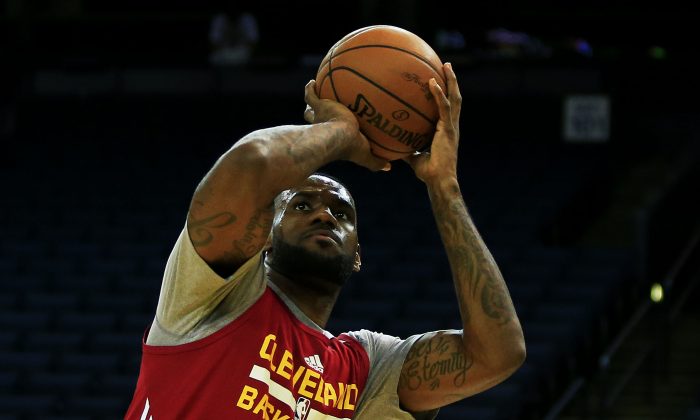 LeBron James of Cleveland has won a pair of titles already, but none with his hometown Cavaliers. (Cliff Hawkins/Getty Images)
NBA

Before we go too far down this path, let me just be clear in saying that Michael Jordan and LeBron James are probably the two greatest basketball players of all time. You really can’t go wrong in choosing one over the other.

Yet while the last major bullet points on Jordan’s résumé end when he hit the shot to top Utah in the 1998 NBA Finals, LeBron is still writing his. Maybe he has something up his sleeve to create some distance.

But to this point in their careers, he and Jordan are very close.

While Jordan had three MVPs by his 30th birthday—to the 30-year-old LeBron’s current four—most MJ fans point at Michael’s leading the Bulls to three titles by the same juncture, and six overall. LeBron currently has only two, but is gunning for a third—though he’s running out of healthy star teammates.

Related Coverage
Stephen Curry: The Curse of the MVP?

Jordan first retired following his age 30 season (1993) after leading Chicago to a third straight championship. He was named Finals MVP all three times.

LeBron currently has two, though this is now his sixth Finals appearance.

In all, Jordan went to the Finals six times and came away with the grand prize—the Larry O’Brien trophy—as well as the Finals MVP award all six times against some stellar competition.

He took down Magic Johnson and the Lakers in ’91, Clyde Drexler and the Blazers in ’92, Charles Barkley and the Suns in ’93, Gary Payton and the Sonics in ’96, and the Karl Malone–John Stockton duo in both ’97 and ’98. No one even forced a Game 7.

But what LeBron is attempting to do with Cleveland in 2015 would surpass any of the individual titles that Jordan won with fellow stars Scottie Pippen, Horace Grant, or Dennis Rodman.

He’s trying to do this one by himself.

People forget that Jordan wasn’t considered the team player that his legendary contemporaries—Larry Bird and Magic Johnson—were until he won the title in ’91. Before Phil Jackson took over as head coach prior to the 1989–90 season, the farthest Jordan had been in the playoffs was the conference finals—once.

Besides Phil on the bench, though, the 10-time scoring champion Jordan had plenty of help on the court, especially on defense.

After Jordan’s first retirement, he returned after nearly two years but the Bulls had to do some retooling to stay on top. Chicago replaced the departed Grant (he left for Orlando) with two-time NBA Defensive Player of the Year Dennis Rodman. The result was the same, as Chicago won three straight titles (1996–98) with Rodman and Pippen (again) having perfect attendance through all three postseasons.

Jordan never had to deal with a missing star teammate during his run—something LeBron is now faced with after Kevin Love’s shoulder injury in round one against Boston and Kyrie Irving’s knee injury in Game 1 of these current Finals.

Although you could never put anything past the ultracompetitive Jordan—especially after his infamous “flu game” performance during Game 5 of the NBA Finals—he never won a title with such an injury-depleted roster as LeBron now is faced with. Should James lift the Larry O’Brien trophy this year, it would trump any championship Jordan won. Let’s just hope he doesn’t catch the flu.