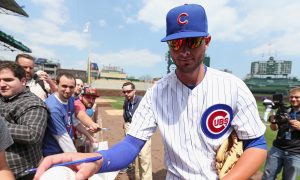 Dodgers rookie center fielder Joc Pederson homered in his fifth straight game Wednesday night during a 7–6 loss at Colorado. With the home run—already his 17th of the season—Pederson became just the fourth Dodger in modern history to go yard in five straight games.

Currently the 23-year-old is second in the NL in home runs, fourth in slugging (.606), third in walks (35), and fifth in OPS (.998). His current power rate puts him on pace for an absurd 52 long balls—which would make him the first Dodger ever to reach the 50-home-run barrier in the franchise’s 130-year history.

Defensively, he covers a lot of ground in center for the NL West-leading Dodgers who are in pursuit of their third straight division crown.

It’s a welcome sight for Los Angeles and their new president of baseball operations, Andrew Friedman, who traded away the popular Matt Kemp, from a crowded outfield situation, in order to make room for Pederson—the team’s 11th-round selection in the 2010 draft.

It wasn’t an easy decision to deal Kemp—the face of the franchise—over fellow outfielders Andre Ethier, Yasiel Puig, Carl Crawford, or Pederson himself. But Friedman made the right trade.

Puig, 24, would have gotten the most return for the Dodgers, but Friedman would have been vilified for dealing a guy who finished in the top 20 of the MVP voting each of his first two season in the big leagues and seems to have a bright future ahead of him. Still, they wouldn’t have had to pay anyone to take him and would have gotten considerable prospects in return.

Pederson himself was still just an unproven prospect last winter and would not have drawn the interest that the young, inexpensive, power-hitting center fielder has now. Plus, Friedman had to keep him for his defense. No one else on the roster is a viable center fielder anymore.

The 33-year-old Ethier was the obvious choice to go, but his contract (owed an absured $55.5 million over three years, including 2015) together with his declining production (.249 average, four home runs in 380 at-bats in 2014) made him attractive to absolutely no one—including the Dodgers. To deal him, the Dodgers likely would have had to do what the Angels did with Josh Hamilton and pay him a huge sum—while getting nothing in return—to play elsewhere.

Ditto for the oft-injured Crawford, who’s currently on the DL with a torn oblique. He hasn’t been a force since 2010—the year before he signed the seven-year $142 million contract with Boston—and is still owed more than $21 million a year through 2017.

So the two-time All-Star Kemp, who had a tremendous offensive second half for the Dodgers in 2014, but is owed more than $100 million through 2019 and missed a considerable amount of time to injuries in 2012 and 2013, was the one to go and the Dodgers found a willing partner in San Diego.

So in an unpopular move (for Dodger fans), Friedman dealt away Kemp, catcher Tim Federowicz, and more than $30 million in exchange for young pitchers Zach Eflin (who was immediately dealt for Phillies shortstop Jimmy Rollins) and Joe Wieland, plus catcher Yasmani Grandal.

Although Rollins, who is owed $11 million this season, has struggled hitting (.211 average) and Wieland hasn’t really contributed yet, Kemp has been a dud with the Padres. The powerful right-hander has just one home run and a .247 average through 55 games with his new team—numbers that Pederson blows away.

But even if Kemp does find his power stroke, the Dodgers still did better in this one than their crosstown rivals, the Angels, did when they paid twice the amount (roughly $68 million) for Hamilton to play in Texas.