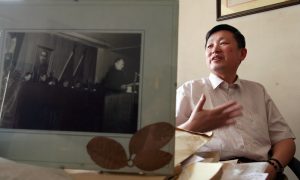 An online post filled with calls to patriotism and telling Chinese people to be on the alert for “Western anti-China powers” went viral—rapidly became very popular—on the Chinese Internet recently.

The post, titled “You are nobody without the motherland” went viral at a time when China is embroiled in territorial disputes—particularly in the East China Sea where the Chinese regime established an air defense zone over international waters on Nov. 23. The post describes the United States as an “initiator of plots” trying to overthrow the Chinese leadership, calls on the Chinese people to support the regime’s policies, and defends the new party leader Xi Jinping.

Several Chinese media ran commentaries on the post, including the PLA Daily and the Guangming Daily, fueling its popularity in online discussions.

Chinese netizens heaped ridicule on the post. One mocked the title, saying, “Slaves have no motherland.” Another questioned the legitimacy of the Chinese regime by saying, “why don’t they say, after chaos, it [China] would be like Taiwan”—Taiwan is democratic, without political repression or the complex of pathologies afflicting mainland China.

The regime mouthpiece Xinhua was not fazed, praising the article for having “won support and sympathy from netizens.”

In a country where the Internet is heavily censored and media is state-run, “viral” may not be what it seems to be.

Chinese media gets directives on what to cover, how to cover it, and what not to cover. One such directive was leaked to the public, after a car crashed into a crowd of people then caught on fire in Tiananmen Square on Oct. 28. It told Chinese media to “Downplay the story; do not speculate on it … and strengthen management of the Weibo accounts of all media and media personnel.”

Online discussions are also controlled through directives to celebrities and other influential people in Chinese society.

In March, authorities tried staging a celebrity-driven campaign on China’s Sina Weibo blog sphere to attack Apple and Volkswagen. It backfired when Hong Kong movie star Peter Ho, after writing “Cannot believe Apple is playing so many dirty tricks in customer service,” accidentally posted the directive: “Need to send out at about 8:20 pm.”

Then there’s China’s “50 Cent Brigade,” which are Internet commentators hired by the Chinese Communist Party to shape online discussions. They spread the regime’s propaganda, while verbally attacking those who oppose it. Their name is based on their income. They get 50 cents of yuan for each post.

In the West, content typically goes viral in one of two ways. It can either get user views through social media as people share, like, or retweet it. Media coverage can also cause content to go viral. As more media covers it, more people discuss it on social media.

The process of content going viral in China is sharply different, however. Targeted content can go viral if the ruling party orders its media, paid celebrities, and paid commenters to play it up.

On the other hand, unwanted content can be prevented from spreading by Chinese censors and by the self-censorship of Chinese Internet users established by an environment of fear.

Nonetheless, while the Internet is heavily censored, it still offers Chinese bloggers the chance to share information outside of the lines laid down by the regime’s censors.

“The way people use the Internet is a lot different,” Cook said, referring to China. “There are a lot of people who use blogs to replace media because they don’t trust the mainstream media.”

“You have this effect where people are a lot more active on these social networking platforms than they are in open societies,” she said.

There are over 500 million Chinese Internet users. Between 200 million and 300 million of those Internet users are also microbloggers—and this army of bloggers can often keep discussion alive on topics otherwise unavailable in China’s environment of strict censorship.

Cook referenced a Dec. 2 letter written by Wang Qinglei, a former producer at China’s state-run CCTV. The letter criticized the strict censorship of media in China, stating, “The voices we hope to broadcast and the attitudes we hope to express have been silenced over and over again.”

Wang’s letter was quickly deleted by state censors, yet Chinese bloggers kept it alive by reposting it. The letter was eventually picked up by Western media.

The definition of going viral is very different in China. In Western countries, content that gets 30,000 views online may be considered to be viral. In China—due to the large number of bloggers and the society’s use of blogs as uncensored news sources—30,000 views may not be much.

Chinese authorities are well aware of how a blog post can take off. A new law to prevent the “spreading of rumors” can get bloggers sentenced to three years in prison if a post the authorities don’t like gets reposted 500 or more times, or gets viewed by at least 5,000 people.

Cook said the new law “has a very chilling effect,” that is likewise affecting what news gets spread.

“People with larger followings are afraid of reposting things that might be sensitive,” she said, and this feeds into the ruling regime’s ability to control what news becomes popular.