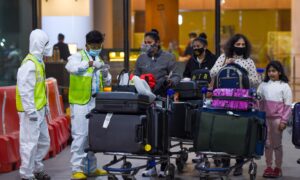 NEW DELHI—It’s the wedding season in India, a fact that is evident by the long wedding processions where families dance in the cold to bellowing brass band music on the way to the wedding.

While today these processional brass bands are a staple in many North Indian weddings, these bands are actually a remnant of British colonialism in India.

These bands were brought to India by the British as military bands in the 1700’s.

“[British military bands] were a crucial apparatus through which Indian subjects could be impressed by, and British rulers assured of, the strength and purpose of the [British] imperial enterprise,” writes Trevor Herbert and Helen Barlow in their book “Music & the British Military in the Long Nineteenth Century.”

[British military bands] were a crucial apparatus through which Indian subjects could be impressed by.

The Indian kings, seeing them as a status symbol of the British elite, started patronizing them for their own ceremonies. But when India gained independence in 1947, these kings lost their kingdoms and these brass bands took on a new role as accompaniment for grooms in Indian weddings, as well as other South Asian countries like Nepal, Bangladesh, and Pakistan.

The role of the brass band is to accompany the groom from his home to the home of his bride or wherever the wedding is to take place. Along the way, the family dances to the band’s music—parents, aunts, uncles, cousins, other relatives and friends all join in.

These bands, called “baraat” bands, or wedding procession bands, can be found in Hindu, Sikh, Muslim, Jain and other religious wedding rituals.

The bands are thought to be auspicious, and are a part of almost every north Indian wedding.

Music was always a part of Indian weddings, but the style has changed with the times.

Traditionally, Indian folk music entertained people in the days before and after the wedding (a week-long affair), and classical Indian music was played during certain marriage rituals because it was thought to be auspicious.

Today, Bollywood and modern western music have also been added to the repertoire. The band has classical Indian instruments as well as western instruments, like brass drums, trombones, French horns, bugles, and sousaphones.

According to Sanjay Sharma, the owner of Master Band, a baraat band company in Delhi, there are more than 1,000 wedding bands in the city. These bands only work for the 45-day marriage season in India, and the musicians are often brought from poor and sometimes rural places just for the wedding season.

Every year, Sharma provides bands for almost 200 weddings around Delhi.

“Clients do ask us for traditional music players also, it varies from community to community. Sometimes clients order a wedding band along with the folk musicians,” he said.

Not all weddings have musicians though. According to Sharma, there is a new trend of families playing the music themselves to save money.

“With cheap pen [flash] drives flooding the Indian market, families who cannot afford the increasing prices of the wedding bands are playing tunes on music players,” he said.

Inside the small office of the Master Band, clients can be seen haggling for the best price on a band, which is calculated by the number of musicians and accessories the client orders.

“It’s my son’s marriage, it’s an event of happiness. Let’s finalize it!” said Subay Singh from East Delhi who was preparing for his son’s wedding on Feb. 16. Singh finally booked a wedding band and accessories for $1,594.

Over the years, wedding bands have undergone a lot of changes. Their uniforms have become more glamorous, with sequins, elaborate headdresses, and more colors than the plain military uniforms the soldiers wore. Other accessories, like neon lights and flower umbrellas that accompany the wedding procession as they walk through often dark streets, have been added to the décor as well.

“It adds so much excitement,” said Pooja Jain, who was at the Master Band office to book a band for her friend’s wedding.

Wedding band companies have also started providing the horses and chariots as part of the wedding band package.

Grooms in Indian weddings ride at the back of the procession on a mare, usually a white mare, and more recently in chariots with multiple horses as their budget permits.

As the standard of living increases in India and families have more disposable income, wedding processions have also become more expensive, and the accessories that accompany these baraat bands more extravagant.

In some cases, the only distinguishable remnant of their british history are their brass instruments and the uniform-like costumes that the musicians wear.