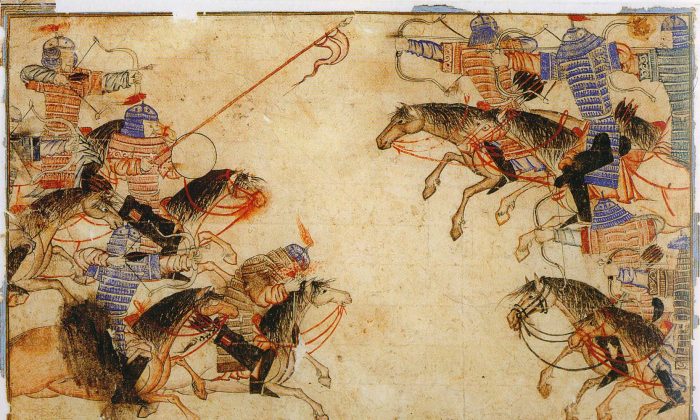 A Mongol melee in the 13th century. (Public Domain)
China

Over 2,000 years ago, the Han Dynasty had unified China and was looking to expand north and west for trade and to secure its borders against the nomadic peoples who often raided imperial territory. The emperor Wu Di, reigning between 141 B.C. and 87 B.C., was known for his extensive military campaigns launched to pacify these dangerous and uncharted lands and establish contact with the tribes that inhabited them.

The men who went on these expeditions and campaigns not only faced danger and peril but also had to dedicate their lives to the endeavors. Their tales are those of epic journeys through what was literally a new world for the Chinese, who had classically known their own land as “all under Heaven.”

Presented here are the stories of two men: one whose journey connected China with the peoples of Central Asia, and another whose loyalty to his imperial duty weathered two decades of captivity during war, until peace with the Xiongnu people (known to the Chinese as the barbarian nomads) was realized.

Zhang Qian and the Quest for ‘Celestial Steeds’

In 138 B.C., the emperor Wu Di dispatched a hundred horsemen from the gates of Chang’an, the imperial capital. Commanded by Zhang Qian, their mission was to seek out peoples who might serve as allies with China in the fight against the Xiongnu tribes, ancestors of today’s Mongolians who frequently encroached on Chinese civilization south of the Great Wall.

They were in search of the source of a semi-mystical breed of horse, stronger and faster than those available in the Middle Kingdom.

The main objective for Zhang Qian and his men was to contact the wealthy and peaceable Yuezhi people, who lived near what is now the Sino-Kazakh border. They were also in search of the source of a semi-mystical breed of horse, stronger and faster than those available in the Middle Kingdom. Dubbed the Celestial Steed, it was expected that these prized beasts would be able to help the Chinese match the renowned cavalry of the Xiongnu.

From the very start, the trip, chronicled in the “Records of the Grand Historian,” by scholar Sima Qian, was fraught with difficulties. Traversing the Tian Shan mountains, the Chinese mission was intercepted immediately, and Zhang Qian was brought before the Great Khan of the Xiongnu. Zhang Qian and his men were held for 10 years before escaping and continuing on their way to the land of the Yuezhi.

The Yuezhi, as it were, received the Chinese mission but made it clear they were not interested in any military undertaking against the Xiongnu. His job done, Zhang Qian turned back and headed through the desert to Chang’an. On the way, they were again captured by the Xiongnu and imprisoned for a year before returning to China in 125 B.C.

Despite their failure to enlist the Yuezhi as an allied military force or to find the vaunted “Celestial Steeds” of Chinese fascination, the expedition highlighted the importance of trade and diplomacy with the Central Asian peoples in the eyes of the Han imperial court, many of whom, like the Yuezhi, were peaceful and demonstrated a high level of culture.

As the Han Dynasty began trade with these tribes, the many exchanges that occurred ultimately laid down avenues that reached as far as the Roman Empire. It was at this time in history that the Silk Road as we know it—a bridge between China and the West—really came into being. It would fulfill this role exclusively for well over a thousand years until the European Age of Exploration opened up equivalent routes by sea.

Su Wu’s Two-Decade Sacrifice and Peace With the Xiongnu

In 100 B.C., a generation following Zhang Qian’s journey, the emperor Wu Di sent the commandant of his imperial guard, Su Wu, as an emissary to the Xiongnu. His travels are described in the “Comprehensive Mirror in Aid of Governance,” an 11th-century Chinese historical document.

As with Zhang Qian a generation earlier, Su Wu’s diplomatic mission consisted of some 100 men. They brought gifts for the Xiongnu chieftain, who had just risen to his position and with whom the Han court hoped to negotiate.

Su Wu faced starvation and was reduced to eating wild roots and hunting rodents, but he always held onto his imperial staff.

But when Su Wu went northwest to the Xiongnu lands, he found little opening for discussion. The Xiongnu chieftain was suspicious and disrespectful, angering Su Wu’s deputy Zhang Sheng. Without informing Su Wu, Zhang Sheng plotted with two Xiongnu officials to assassinate an important adviser and usurp the chieftain.

The conspiracy failed, and Zhang Sheng’s role was revealed under interrogation. Under pressure, Zhang Sheng further implicated himself and the rest of the imperial mission before being executed. Even though Su Wu had nothing to do with the plot, the already-wary Xiongnu chieftain was convinced that the Chinese were bent on his downfall.

The important adviser knew of Su Wu’s ability and wished to recruit him to work for the Xiongnu chieftain. The chieftain himself was impressed with Su Wu’s formidable character and spared his life in hopes of turning him to his side.

The following two decades became a battle of wits between Su Wu and his captors, who exiled him to a desolate region near the “northern sea”—Lake Baikal in what is now Siberian Russia. There, he often faced starvation and was reduced to eating wild roots and hunting rodents, but he always held onto his imperial staff and refused all offers from the Xiongnu to employ him as one of their own officers.

As if the physical conditions of Su Wu’s imprisonment weren’t trying enough, the news that came from home was even less uplifting. Twice during his Siberian exile, the Xiongnu sent an official to inform Su Wu of the misfortunes that had occurred back in China. The great emperor Wu Di was dead, and Su Wu’s brothers had been accused of crimes and committed suicide. His mother had died and his wife had remarried.

In 81 B.C., after repeated attempts, the Chinese finally made peace with the Xiongnu. After some further difficulty, the Xiongnu chieftain eventually agreed to send Su Wu back. Still gripping his imperial staff, and with a head of white hair, Su Wu returned to the imperial palace in Chang’an and was received by the new Han emperor.

Through the centuries, the relationship between nomadic peoples and Chinese civilization shifted between war and peace, friendship and adversity.

Su Wu’s unbroken will through nearly two decades of crushing exile in the northern wasteland was celebrated as a testament to the long-term endurance central to the overall character of the Chinese, who, though they may meet with endless calamity and hardship, hold fast to the higher standards that guide them through the generations.