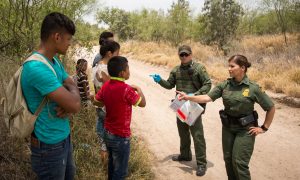 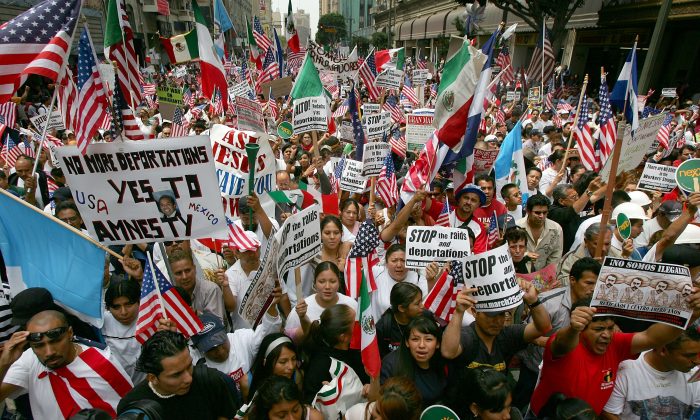 Thousands of demonstrators march through downtown to City Hall in one of several May Day marches and rallies in southern California and in at least 75 cities nationwide to press for immigrant and labor rights on May 1, 2007 in Los Angeles, California. David McNew/Getty Images
Viewpoints

There is no issue that could more decisively spell the end of American liberty than that of amnesty for this country’s millions of illegal aliens.

Illegal immigration, and the societal changes it will bring with it, is more than an economic issue, a public health issue, a law enforcement issue, or even a national security problem; it is an existential threat to the survival of the United States as a constitutional republic.

It comes down to simple math.

For years, the generally accepted estimate of illegal aliens living in the United States has been around 11 million. But a 2018 study released by the Massachusetts Institute of Technology’s Mohammad Fazel-Zarandi, a senior lecturer in the operations research and statistics group, and his colleagues, Edward Kaplan and Jonathan Feinstein, both from Yale School of Management, gave cause to re-visit that figure.

According to the authors: “The research found that the number of undocumented immigrants living in the country is about 22.1 million, nearly twice the most prominent current estimate of 11.3 million. Even using extremely conservative parameters, the study estimates a population of 16.7 million undocumented immigrants, nearly 50 percent higher than the widely accepted population figure.”

If given citizenship and voting rights (which Hillary Clinton promised to initiate within 100 days of taking office), the 11 million to 22 million eventual new voters would have a huge impact on future U.S. elections.

This fact isn’t lost on left-wing activists in the United States, who seek to use the illegal alien population to secure a “permanent progressive majority” for the Democratic Party and their allies.

“For decades, the CPUSA has been involved in the struggle for the rights of immigrant workers and their families. … A central focus has been gaining legal rights for the 11 million undocumented,” Schepers wrote.

“We call for progressive legislation which legalizes as many people as possible as quickly as possible. … We are for ease of access to U.S. citizenship.”

Former Illinois Rep. Luis Gutierrez was—for more than 20 years—the main champion of illegal alien amnesty in the House of Representatives. He is a former leader of the Marxist–Leninist Puerto Rican Socialist Party and an ally of both the United States’ largest Marxist organization—the Democratic Socialists of America (DSA)—and the pro-China League of Revolutionary Struggle.

In July 2015, Gutierrez addressed the House on the power of the Latino vote and the political left.

“If millions of people naturalize, become citizens, and we add to that the million Latino citizens who this year will turn 18, plus all our allies in the African-American community, the LGBT voters and younger voters, environmental voters, women voters, Asian voters, union voters … [all of these] constitute a majority of Americans. Together, we are the New American Coalition that will dominate politics for decades to come.”

Gutierrez’s good friend, former SEIU International Executive Vice President Eliseo Medina, is the undisputed leader of the “amnesty” movement in this country. Medina is a longtime member of the DSA and a CPUSA ally, and was an informal adviser to former President Barack Obama on immigration and amnesty issues.

At the America’s Future Now! conference in Washington on June 2, 2009, Medina addressed “progressive” attendees on the need for urgent illegal alien amnesty.

Speaking of Latino voters, Medina said: “When they [Latinos] voted in November, they voted overwhelmingly for progressive candidates. Barack Obama got 2 out of every 3 voters that showed up.

“[If] we reform the immigration laws, it puts 12 million people on the path to citizenship and eventually voters. Can you imagine if we have, even the same ratio, two out of three?

“If we have 8 million new voters who care about … and will be voting. We will be creating a governing coalition for the long term, not just for an election cycle.”

Medina exhibits no compassion for the plight of illegal aliens or sympathy for families being torn asunder. He doesn’t speak of a “nation of immigrants” or the “American dream.”

This is all about hard numbers and raw power.

It’s very clear that the left wants illegal immigrant amnesty for one reason only: votes.

The 2012 Republican presidential candidate, Mitt Romney, lost his election by about 2.5 million votes. President Donald Trump actually lost the popular vote by around 3 million ballots; he won through the Electoral College. Thank God for the wisdom of the Founding Fathers, who gave America a system to temper the dangers of raw “majority rule” and political dominance by large population centers and ethnic or religious blocs.

Many states with high illegal alien populations, such as Arizona, Georgia, Florida, and North Carolina, are only marginally inside the Republican camp. Illegal alien amnesty would almost certainly send those states permanently “blue.” Virginia—once “red”—also would be lost to the Republicans. Even Republican-stronghold Texas is very vulnerable. Losing only one or two of these states would doom the Republican Party to minority party status, and eventual oblivion.

How can the Republicans hope to counter 10 million to 20 million new Democratic voters, possibly as soon as the 2022 election cycle?

Today’s Democratic Party is no longer the party of Harry Truman or John F. Kennedy. It’s now a party of the far left. At least 30 percent of current Democratic senators and congressmembers have ties to the CPUSA, DSA, Freedom Road Socialist Organization, Committees of Correspondence for Democracy and Socialism, or other revolutionary organizations. Many congressmembers also have ties to China, Iran, Venezuela, and especially Cuba.

Illegal alien amnesty would give the Democrats permanent control of the United States. This means a “one-party state” soon to be dominated by the far left. Think California nationwide, with no hope of a turnaround.

No political party should ever be given permanent, unchallenged power.

Illegal alien amnesty is the left’s road to the American “one-party state.” For the sake of our children and grandchildren, for the sake of the remaining free world, this can’t be allowed to happen. It must be fought with every fiber of our being by those who love liberty.

America, you must say no to amnesty.