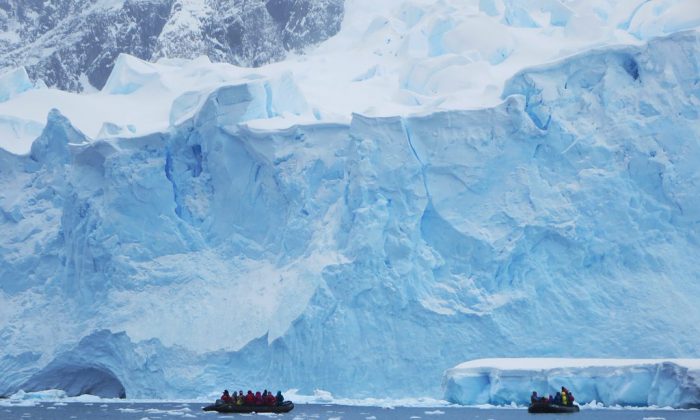 How Ice Sheets Collapse: A Lesson From the Past

Antarctica and Greenland may be two of the most remote places on Earth but what happens in both these vast landscapes can significantly impact on human activity further afield.

Recent changes seen in vast ice sheets could have serious implications for millions of people around the world who live in coastal areas. These ice sheets store enough water to raise sea levels by over 60 meters, and there are some very worrying signs about their stability, especially in West Antarctica.

The real problem lies in the fact that ice sheets are reacting to increases in air and ocean temperatures and contributing to rising sea levels, currently estimated to be around three millimeters a year. While it is clear that ice sheet contributions to sea level rise have accelerated in the last decade or so, there is much more uncertainty about how ice sheets might respond in the future. With one recent study giving estimates which ranged from 60 centimeters to three meters by 2300. And that’s just from Antarctica.

So how does Antarctic ice make its way to the ocean? The answer lies in ice streams, which are zones of the ice sheet that flow much faster than the surrounding ice at hundreds of meters per year. The ice streams then discharge ice into the ocean in the form of icebergs that eventually melt.

Ice streams can be unpredictable as they can turn on and off and change their position. Measurements show that there are about 50 major ice streams in Antarctica, which account for around 90 percent of the ice that is lost each year.

Ice streams make predicting future changes in ice sheets very difficult. While it’s relatively easy to estimate how much more melting might occur if air temperatures increase by say 2 degrees Celsius, nobody really knows what will happen to the ice streams.

Lessons From the Past

A different approach to predicting the future is to look to the past and see how ice streams responded to previous periods of climate warming. In our paper, we reconstructed past ice stream activity, when an ice sheet the size of Antarctica disappeared over North America at the end of the last ice age between around 20,000 and 7,000 years ago.

This “North American Ice Sheet” covered most of Canada and by using satellite imagery to view land forms it left behind, we were able to map the location of all of the major ice streams that were once active in this ice sheet. We then used an existing database to track the retreat of the ice sheet over time—and estimated when the ice streams switched on and off. We also worked out how much ice the streams might have discharged from the ice sheet.

Lessons for the Future

Ice streams in Greenland and West Antarctica are contributing to sea level rise which is likely to continue for at least the next century or so. Our reconstruction clearly showed ice streaming is much more likely to take place when the ice sheet is in contact with the ocean and slides over a bed of soft, slippery sediments. This confirms that some parts of West Antarctica may be especially vulnerable.

While not everyone agrees the North American ice sheet is a useful comparison for the present day ice sheets, it is the only comparison we have of an ice sheet as big as Antarctica experiencing a rapid warming, and eventually complete disappearance. So when it comes to the millions of people around the world who live in coastal areas, only time will tell if what we have learnt from the past has relevance for the future.

Chris Stokes is a professor in the department of geography at Durham University in the U.K. This article was originally published on The Conversation.