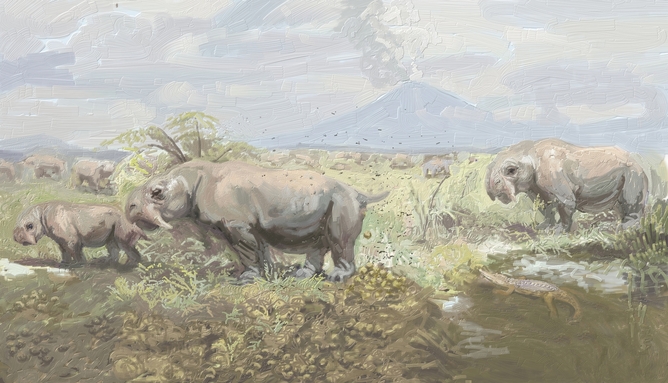 Why did they always have to go in groups? (Martin Ezcurra)
Science

How I Found the World’s Oldest Communal Toilets

Fossils can tell us lots about animals – their size, age or sex, which is mostly physical characteristics. Evidence about how they may have behaved is rare. But the 240m-year-old fossil dung that I found, along with my colleagues, in Argentina gave us some of those rare insights into the behaviour of a long-extinct animal. Simply put, we unearthed what are the oldest-known communal toilets used by animals.

The fossils were found in northwestern Argentina, at a site which has some of the best-preserved fossils from the Middle to Late Triassic period (about 240m years ago). This time interval witnessed the origins and early evolution of numerous important vertebrate groups, including dinosaurs, lizards, turtles and mammals.

During our fieldwork here in 2011, we found eight sites full of fossil dung. The discovered fossil dung, known scientifically as coprolites, are whitish grey to dark grey, spiral to sausage-like in shape, and their diameter ranges from 0.5 to 35 centimetres.

Fossil dung is quite common in the geological record, but it don’t always tell us much. This time, however, it was different. The sheer number of coprolites (more than 30,000) in the most abundant areas could not have been produced by one individual, but we needed more data to be sure.

Using CT scans, we looked inside the coprolites to identify the last meals the animals may have had before defecating. It was mostly plant remains, which meant the animal was herbivorous. The content plants pointed to a group of animals called dicynodonts, which are distant relatives of mammals. The presence of hundreds of bones of dicynodonts preserved in rocks nearby allowed us to narrow the identification to a single species, Dinodontosaurus turpior, which were rhino-like creatures weighing more than three tonnes and with skulls with a pair of large tusks.

Knowing the herbivorous nature of these animals, and given the lack of any rivers around, which could have transported the coprolites to one area, we concluded that the area was used as a communal toilet. This defecation behaviour is present in several large living herbivores, such as rhinos and elephants. It plays a role in communication with members of the same species and with other species, as well as in prevention of parasite re-infestation.

The find is exciting because it is the oldest record of this behaviour in the fossil record, and it is the first evidence of communal toilets in non-mammal herbivores.

We reported the findings in the journal Scientific Reports, but we’re not done with the dung yet. It can tell us about how seasonal variations caused changes in the food these animals ate. It is important that we learn more about the flora and fauna from this period, because it will help reveal how immediately after this period dinosaurs came to dominate our planet for 160m years.

Martin Ezcurra is a PhD student at University of Birmingham

This article was originally published at The Conversation.  Read the original article.