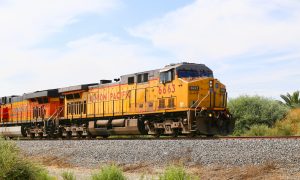 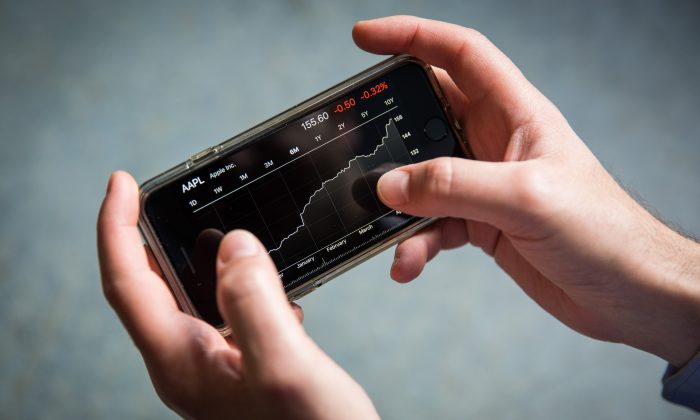 A man views a graph of Apple's stock for the past six months on his iPhone in New York on May 15, 2017. (Samira Bouaou/The Epoch Times)
Business & Economy

How High Can Apple Stock Go?

Apple Inc. first eclipsed $800 billion in valuation on May 9, becoming the first U.S.-listed firm to surpass that threshold.

The maker of iPhones, iPads, and Mac computers has been on a recent tear. Shares of the Cupertino, Calif.-based company closed at $155.70 on May 15, up 34 percent since Jan. 1 and 72 percent over the last 12 months. In other words, Apple’s value has gone up by more than two-thirds during the last year.

There are a few key factors propelling Apple’s recent rise, with some due to the overall market and some unique to Apple. With a new iPhone on the horizon for later this year, eclipsing the $1 trillion mark will likely be a matter of when, not if.

Peter Lynch put mutual funds on the map in the 1990s. Two decades ago, mutual funds were a part of many investors’ portfolios. Today, the same can be said of index funds—we are squarely in the age of passive investing.

This trend has been a boon to Apple perhaps more than any other company.

That may sound dull, but given their low expense ratios, index funds have become extremely popular with retail investors today—an era where most actively managed funds cannot manage to beat the market. According to the latest S&P Dow Jones Indices, 66 percent of large-cap managers, 89 percent of mid-cap managers, and 86 percent of small-cap active managers underperformed their respective benchmark indices during 2016.

Apple is the biggest component of the S&P 500 Index, with a weighting of 3.9 percent. But as index funds try to track the S&P 500—by way of purchasing the stocks that make up the index—they have poured billions of dollars into purchasing Apple stock.

This trend is made evident by scanning the list of Apple’s biggest shareholders as reported in its first quarter numbers. Its largest single shareholder was Vanguard Group Inc., which owned 343.8 million shares, worth around $54 billion. Vanguard is the world’s second-largest ETF provider. The four single biggest shareholders of Apple were Vanguard, BlackRock, State Street, and FMR (Fidelity Investments). All of these companies are big players in the index fund industry.

As index funds continue to occupy a prominent position within investors’ portfolios, inflows into Apple shares will continue, driving up demand for the stock.

While details of President Donald Trump’s tax overhaul proposals are scarce, analysts say that the corporate cash repatriation aspect of the tax bill will likely receive the most support from both Democrats and Republicans.

And that has huge ramifications to Apple shareholders.

The tax proposal will likely grant corporations a one-time lower tax rate applied on repatriation of any cash parked abroad. Repatriation will be “one element of tax reform that both sides of the aisle can agree on,” UBS analyst Julian Emmanuel wrote in a note to clients on May 7, according to CNBC.

“The potential for continued buybacks (and resulting EPS [earnings per share] uplift) from repatriation reinforces our overweight call on tech and health care, which together hold over 80 percent of the offshore cash,” Emmanuel wrote.

Apple currently has the most cash parked abroad of any U.S. corporation. As of April 1, $240 billion—or 93 percent—of Apple’s total cash of $257 billion resided outside the United States, Apple CFO Luca Maestri said at the company’s first quarter earnings call with Wall Street analysts.

When Apple decides to bring back its massive overseas cash pile, it could gradually increase the company’s share price.

Apple already runs one of the most effective share buyback programs of any U.S. listed company. Generally, companies buy back enough shares to cover the issuance of stock-based compensation to prevent dilution of existing shareholders. But Apple has bought back far more shares than that. Since CEO Tim Cook announced the buyback program in 2012, Apple has spent around $144 billion to repurchase shares, taking more than 1.4 billion shares out of trading. Its weighted average share count has decreased from 6.5 billion in 2011 to around 5.2 billion today.

The company’s board has authorized $175 billion of share buybacks. To see the effect of Apple’s buyback program, just compare the company’s diluted earnings per share (EPS) figures for the calendar quarter ending in December (typically the company’s best quarter due to holiday sales) for 2016 and 2015. Although net income was lower for calendar fourth quarter 2016 ($17.9 billion) compared to 2015 ($18.4 billion), diluted EPS was higher ($3.36 versus $3.28) due to lower-weighted average shares outstanding.

Apple is currently funding its share repurchase with debt, so further buybacks are constrained by the amount of cash on its onshore balance sheet. But if the company decides to repatriate the majority of its $240 billion offshore cash, the board could be incentivized to ramp up the hugely successful share buyback program further.

As of May 15, Apple’s price-to-earnings ratio is 18.2. Compared to S&P 500 trailing twelve months average of 23.8, Apple’s stock seems cheap versus the market.

Cheap may not be the first thought that comes to mind when considering Apple stock, but it’s an accurate depiction.

And that has attracted the attention of the world’s most famous value investor, Warren Buffett. While another Berkshire Hathaway portfolio manager initially bought Apple stock—not Buffett himself—Buffett has since increased his holding in the technology company.

Buffett has cited the popularity, and consumer loyalty, of the iPhone for his belief in the company. “You can’t move people by price in the smartphone market remotely like you can move them in appliances or all kinds of things. People want the product. They don’t want the cheapest product,” Buffett said on CNBC’s “Squawk Box” May 8. “[The iPhone]’s a very, very, very valuable product to people that build their lives around it. And that’s true of 8-year-olds and 80-year-olds.”

Apple’s market capitalization sits at just over $811.5 billion as of May 15. Subtracting its net cash (cash less debt) of $158 billion, Apple’s valuation sits at around $653. By that measure, the company’s core business has a relatively reasonable valuation multiple of 14.3.

With a completely new iPhone expected later this year—to commemorate the 10th anniversary of its introduction—Apple could be at the beginning of another lucrative iPhone upgrade cycle. BMO Capital Markets estimated that 31 percent of iPhone users will have a phone that is at least 2 years old by the time the next iPhone is introduced.

And with that, Apple’s stock, and its valuation, could have more room to run.