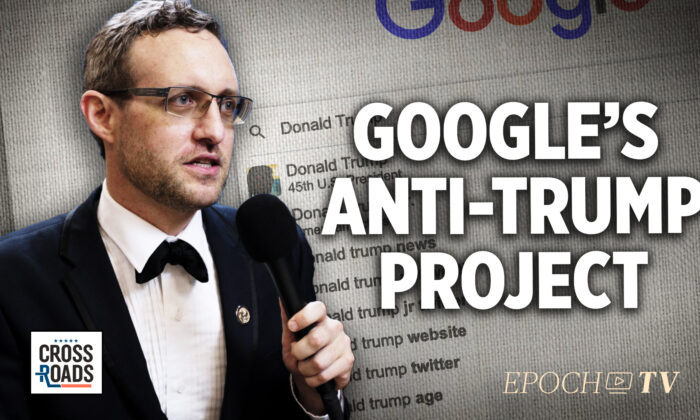 In an episode of “Crossroads” titled “To Target Trump, Google Rewrote Its News Algorithms,” Joshua Philipp interviews Google whistleblower Zach Vorhies, former Google employee and now a reporter with Project Veritas. In the interview, Vorhies talks about the tactics and motives behind Google’s actions, which he claims is the world’s most dangerous totalitarian global organization.

He talks about how Google specifically rewrote their news algorithms to go after President Trump. He reveals actual slides from the company scoring system built around the fight that Trump was having at the time with former FBI Director James Comey over Russian collusion. Vorhies explains how Google built a clustering mechanism where it could use trigger words and key phrases to make one story a continuation of another story, forming a super story that spanned eight days or so. He says this tactic is not a result of demand or increasing market share in the United States and it’s not because these are stories people are following or really want to have on the forefront. Competitors like DuckDuckGo are exploding because people don’t like what Google is doing.

He talks about the way Google allows the mainstream media to stay on top of the search and news index. Each page has a rank score and Google’s scores are based off what the mainstream media and Wikipedia say. This is a problem because Wikipedia has now gone from using primary sources to using secondary sources, which essentially allows the mainstream media to create a narrative, and use everything else to perpetuate it. If Wikipedia uses a quote or information from a slanderous article, the statement may be retracted from the article after further evidence comes out, but the narrative will not be retracted from Wikipedia. Vorhies refers to this system as a “defamation laundering engine.”

The episode explains how the page rank in Google used to change slowly, but now the changes happen rapidly due to the authoritarian nature changing rapidly. For example, if a user quotes Fauci or the CDC on information they said a year ago, that post is going to be labeled as false information. Now that Google rapidly changes the narrative almost monthly, it has to have an automatic way to shift the definition of truth and frame the narrative around that.

He says it is an intentional move based on ideology, citing when Google went IPO, it had a constitution and promised stockholders and the world that it would be politically neutral. Since then, Google turned on a dime when the wrong presidential candidate got elected to office through the democratic process. The only reason for changing the original approach was political, in Vorhies opinion.

Vorhies talks about his time working at Google and that although he was not on the Fake News Team specifically, Google has a transparent internal structure which allowed him to search what the Fake News Team was working on. He did that in 2016, when the CEO said the company was censoring so-called “fake news” in the election. He looked at the design documents which led to other documents and downloaded them as proof.

The documents showed the fake news examples that Google was using to label other information as fake news, and he found that the censored news was all about Hillary Clinton. It was then that Vorhies realized this censorship wasn’t about whether the news was true or not, it was about putting a thumb on the election scales. In other words, Google was using the label of fake news to stifle actual legitimate reporting by creating an algorithm to define “fake news” and let it continue to do it automatically.

Vorhies also found a project called “Machine Learning Fairness,” which has to do with algorithmic reranking and classification of data on the internet. What this system does is build classifiers, which is a specialized collection of artificial intelligence trained to identify and label information either as racist, misinformation, untrue, etc. Google uses these to label information in real-time as it comes out. When the company built the system, it had humans go through and label information based on their own beliefs. Those labels were then scored and input into a machine, where the machine expands on that score and can run on  new input it has never seen before, then label it accordingly. This can even be done on images, for example labeling the American Flag as a right wing hate symbol and the machine will censor any future pictures with an American Flag.

Vorhies spoke of seeing a Youtube algorithm with about 30 classifiers in real-time on youtube videos, so when a video was posted it would be transcribed and classified based on the words. This classification would happen immediately. “At a flick of a switch they can figure out what to blacklist, or what to supress, or what to demonetize.” He clarifies that it doesn’t mean all classified content is blacked out, but it can keep that user from making money off of it as well as reroute the traffic flow around that video.

In perhaps the most concerning part relating to privacy, Vorhies says even if you turn off location on your Android, the tower triangulation will still pick up your location, giving Google full monitoring of everyone using an Android phone. He even said they have hidden operating systems that run even when the power to your computer is turned off. He says there are exploits everywhere that are not yet made available to the public. So although businesses have firewalls, with these exploits others can get past those firewalls and then it is “game over.”

This new, unknown software has serious implications for national security, as seen with the Chinese Communist Party (CCP) already infiltrating advanced military equipment. Philipp talked about the Electronics Intelligence Branch of the CCP, which targets satellites. It can potentially change data going in and out of satellites. Since American fighter jets receive targeting information from satellites, this ability is extremely concerning and dangerous.

Vorhies and Philipp talked about the CCP releasing a policy that any company doing business in China or with China, has to follow the directives of the CCP, meaning Google, as well as every single other company. If the CCP sanctions an individual, such as it did with Mike Pompeo, these companies have to enforce those sanctions as well. Philipp poses the question of what happens if the United States enters a war with China? Where do the loyalties of these companies lie if they are controlled by the CCP?

Vorhies says Google has neither boundaries nor borders, which means everything America develops as intellectual property for defense and security can be owned by the CCP. He says we need to have an investigation and that we are in the dark, not knowing how far they have penetrated into our war systems. “I hope we don’t get into war with them because we might find out that all of our systems are deeply compromised and that we don’t quite have the military that we thought we did because a lot of it just goes down because of electronic warfare that they’re able to leverage against us.”

When asked why Vorhies wrote his latest book, “Google Leaks: A Whistleblower’s Exposé of Big Tech Censorship,” which cost him his career among other attacks and push back, he said “I wanted to give Americans and people who love America and love the freedoms and liberties, I want to give them one final chance to be able to stop this thing.” Vorhies talks about his experience working at Google, where he knew censorship was happening while at the same time Google was deriding everyone who speculated about censorship and labeling them as conspiracy theorists.

Vorhies says that because of his book, we can prove that Google is “essentially operating as a foriegn propaganda intelligence outlet. They’re not pro-American, they are trying to destabilize America and subvert it.” He says now that we know what is happening, we can take the necessary steps to break it up, put some chains on it, and more importantly use other technologies. “When all else fails, the fact that people are now moving to other technologies like DuckDuckGo and these other services means that we’ve got a shot at using the free market in order to overcome totalitarianism.”

Crossroads premiers every Wednesday and Friday at 6 p.m.—exclusive on EpochTV.