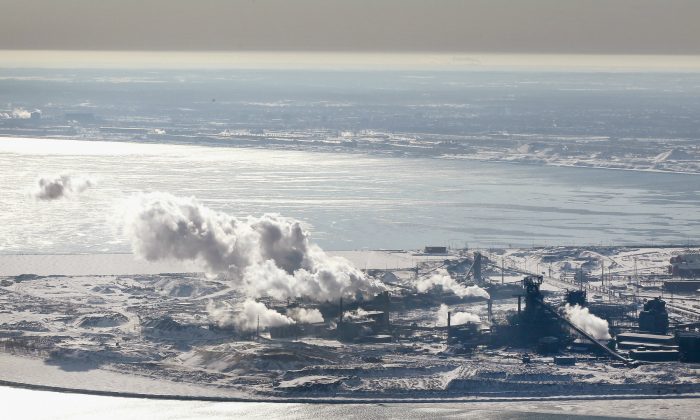 The steel works near Gary, Indiana, on the shore of Lake Michigan in February 2018. The EPA considers Gary and other similar towns to be victims of environmental injustice, but economic and policy decisions are more the cause of the degradation of the city. (Scott Olson/Getty Images)
Viewpoints

In my last article, we talked about the development project, what it meant to the low-income community that would host the project, and the care we took to keep big, project-killing environmental NGOs on the sidelines.

Getting the project approved, even without the environmental NGOs stepping in, took a lot of effort. The state permitting authority was extra careful with the project because they were justifiably wary of how the public and media would react.

These days, complying with all applicable regulations and proving that your project will not cause any air quality violations isn’t good enough. State and local agencies spend a lot of time worrying about optics when a project attracts public attention.

Public relations types worry about optics, not scientists. The sad fact of environmental regulation in America today is that public relations counts far more than science, far too often.

This is especially the case when a project involves low-income, minority communities where the trigger issue of “environmental justice” is always lurking just below the surface, a public relations landmine ready to explode when someone in the project development process unwittingly says the wrong thing or attracts the wrong kind of attention.

Environmental justice is the proposition that low-income, minority communities are unfairly marked for heavy industrial development that causes those communities to bear a disproportionate load of the pollution generated by the facility.

Ironically, this is often the case in many developing nations, but isn’t and hasn’t been the case in the United States for a long time.

Low-income neighborhoods in America are indeed located near heavy industrial sites like steel mills and refineries, but now we enter into a chicken and egg argument.

If you do a deep dive, you find that the former almost always explains the dynamic.

U.S. Steel’s Gary Works, the largest integrated steel mill in the United States, is an all too typical example of the phenomenon. When Gary Works opened in 1908, the city of Gary, Indiana—named after U.S. Steel chairman Elbert Gary—blossomed. Jobs were plentiful and as the mill expanded, the city grew in both prosperity and population.

Then, in the sixties and seventies, the global upheaval in the steel industry stripped American jobs in this industrial sector. Gary transformed from wonderfully prosperous to desperately poor in the space of a couple of decades. Families with sufficient income to leave Gary did so in droves. Only the most destitute remained because that was the only place they could afford to live.

Though the Environmental Protection Agency (EPA) considers Gary, and other towns like it, as victims of environmental injustice, that’s not the source of Gary’s problems, nor is the arbitrary imposition of so-called environmental justice the solution.

Gary is the victim of poor economic and policy decisions, both at the public and private level. Environmental issues, to the degree that they might actually exist, are an effect, not a cause.

The call for environmental justice and the Obama-era EPA’s obsession with the concept did far more harm to low-income, minority communities than almost anyone realizes. Hanging the “environmental justice” tag around the neck of a community was, and is, a virtual death sentence in terms of economic development.

In other words, if the rules are right, enforce them equally—everywhere. If the rules or wrong, fix them. We should not create two separate and unequal classes of environmental protection based on the concept that we are incapable of identifying and addressing either problem.

At this point, you may be wondering: what happened with “the project” that formed the backdrop of this two-part series? Did it happen? Did it do all the good we expected?

Sadly, the answer is that 2008 happened. We got the permit to build just a few months before the housing bubble exploded and the Great Recession kicked in. After the bottom-dropped out, things changed radically in the world of finance.

If you had a $500,000 project to produce solar-powered jet-packs, you had a very good chance of glomming onto stimulus money. If you were upside down on your $200,000 mortgage, HARP (Home Affordable Refinance Program) could help you out. Anything in between? Financing in the middle, for the kind of projects that keep the GDP growing, dried up to a trickle and my project was just another victim of that reality.

I am convinced that had we gotten the permit six months earlier, we would have gotten the financing the project needed. That would have been a game-changer for the community. But we didn’t and—I am also convinced—the reason we didn’t was because the fear of being accused of environmental injustice stretched out the timeline just long enough to create economic injustice instead.