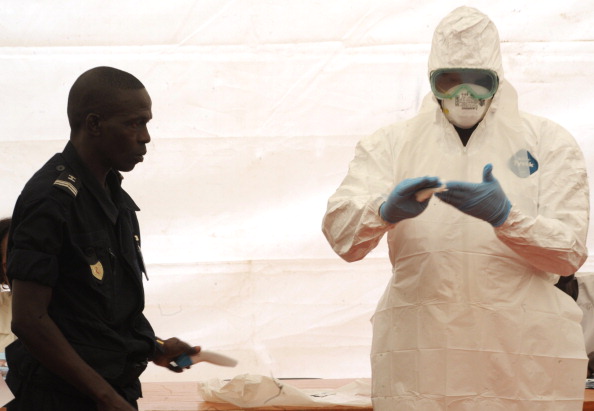 Authorities are rapidly trying to stop the spread of Ebola.(Seyllou/AFP/Getty Images)
Africa

How Ebola Could Leave Africa: A Tale of Two Travellers

It is 6am on a warm West African morning. Two men, Ahmed and Milton, are up early, getting ready for long journeys. Apart from that they have little in common.

Ahmed is a high-ranking official in the Ministry of Health of the Republic of Guinea. He is a successful doctor, drives a Mercedes and lives in an exclusive air-conditioned apartment block in the Kaloum district of Guinea’s capital, Conakry. Milton has no steady job, no car and shares a crowded corrugated iron shed in East 3, the poorest part of Sierra Leone’s capital, Freetown.

Ahmed is travelling today on important business, as he often does. Milton is simply fed up with living in poverty and is willing to risk his life to find something better. Their paths will cross in the evening of the following day, in Guéckédou, 500km to the east.

Guéckédou, situated in the eastern forested region of Guinea, is a small city, with a population of around 200,000. Even so, few people outside of Guinea had heard of it until March 2014, when it became the centre of the latest outbreak of Zaire Ebola virus, the deadliest member of the cluster of viruses that take their name from the Ebola River in the Democratic Republic of Congo (DRC), where they were first discovered in 1976.

Between 1976 and 2013, the virus caused 1,388 cases of Ebola haemorrhagic fever in the DRC and the neighbouring republics of Gabon and Congo-Brazzaville, killing 1,098 people, a 79% fatality rate.

But the 2014 outbreak, which began in the village of Méliandou, 20 minutes bone-jarring drive up the road from Guéckédou, has so far created 1,201 cases and claimed 672 lives. This 56% fatality rate is probably not an indicator of a milder strain, but simply that there are many people now struggling with the disease who will eventually be added to the list of the dead.

The sheer size of the outbreak has been overwhelming, shattering the previous record (318 cases in 1976) almost fourfold, and spreading out of Guinea into neighbouring Liberia, Sierra Leone and now Nigeria.

It is late evening in Guéckédou, and Georges would normally be about to close the café he owns near the junction of the N1 and N16 highways. But this is Ramadan, and business has been brisk after dark. Tonight he has only two customers left, and he wishes they had never arrived.

It’s been a hard day and Georges has developed a nasty headache. A minute ago he had to go out into the backyard to vomit. He reaches for the stand-pipe, but the water is off again, so Georges just cleans himself off as best he can and goes back inside. The two men in the café have started talking. One is young and bedraggled and carries a tattered rucksack bulging with who knows what. The other is middle-aged and his copy of today’s La Lance is almost as impeccably pressed as his white shirt.

Georges brings their drinks and some fresh sandwiches he was in the process of preparing before he went out the back to be sick. The older one is called Ahmed and he is here to report on progress in controlling the worrying outbreak of Ebola virus for the ministry back in Conakry. Then in a couple of days he’s going on to give a seminar about it at a conference in Paris.

The young one, Milton, doesn’t speak much French at all, but in a mixture of English and Limba (which Ahmed and Georges both understand a bit) explains he is trying to get to Agadez in Niger, 3,000 km to the northeast, where he hopes to buy a place on a trans-Saharan migrant convoy headed for the Mediterranean coast, and then a berth on a boat to Europe. He’s heard that there is work to be had there, and life can’t get much worse back in East 3.

Ahmed, who is knowledgeable about almost everything, wishes him luck but warns him that this dangerous journey is even more perilous now. The desert to the north of Agadez is in a state of revolt and landmines have been scattered everywhere. At the other end of the trail, Libya is also sinking into civil war again. And if Milton can’t make the coast by the end of September, the Mediterranean crossing becomes far rougher and more dangerous.

Georges is now feeling a little better and decides to sit down with his customers, mopping his perspiring brow with his apron. Perhaps the next drinks and a little more food are on the house. They part after a few hours, laughing and wishing each other well on their respective voyages in life. But these voyages will be short.

Georges was already infected with Ebola virus, and now it has claimed them all. And before these three die they will carry it on towards their other destinations.

The illegal migrant Milton and the international business traveller Ahmed are of course fictional characters, but they represent the two main aspects of the human dimension in the spread of Ebola virus. Migrants heading for Europe from the Guinea/Sierra Leone/Liberia area have two main routes north.

The first of these is entirely by sea, heading northwards towards Spain. The second is by land, travelling on convoys heading out across the desert from the city of Agadez in Niger. To reach Agadez from Sierra Leone, the most direct route is the one travelled by Milton, by road across Sierra Leone to Kailahun, then taking the ferry across the River Moa between Sierra Leone and Guinea and pressing on north by road through Guéckédou.

However, if migration of this sort was a vector for Ebola virus transmission, we would by now have expected to see cases in Agadez or locations in between, which we have not. Milton may be the kind of migrant that the European press demonise the most, but clearly he is rare.

Ahmed, on the other hand, who in our scenario goes on to transmit Ebola virus to his international conference in France, has already been partially translated to real life with the case of the Liberian official who developed symptoms while travelling to Lagos, Nigeria, and who died after arrival.

Containment of Ebola virus poses three problems: preventing its spread through international travel, preventing its local expansion in Guinea and surrounding areas, and an understanding of the virus’ evolution. Clearly there is a lot of work still to be done, or horror fiction will become reality.

Derek Gatherer does not work for, consult to, own shares in or receive funding from any company or organisation that would benefit from this article, and has no relevant affiliations. This article was originally published on The Conversation. Read the original article.