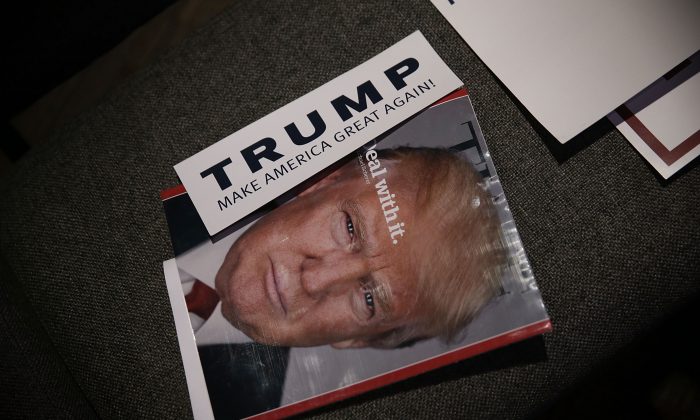 After Super Tuesday, print and broadcast media have woken up to the very real possibility of President Donald J. Trump.

But they can’t seem to understand that their own decline is a major reason for his success. Win or lose, Trump has changed the face of media and politics alike. It’s a simple formula: new media + reality TV = new media reality.

In the United States, 88 percent of the population can get online. For the first time, there is a universal national medium that is interactive. In 2008, new media analyst Clay Shirky borrowed a phrase from James Joyce to describe what’s happening: “Here comes everybody.” In 2016, we might say: “Here comes Trump’s new media reality.”

We watch TV. We go online. It’s the difference between passive and active that makes new media so disruptive, to use the favorite Silicon Valley word. And the results are, in this case, really transformative.

Trump gets it. He destroyed Jeb Bush in two words: “low energy.” Why waste huge sums on 30-second TV ads when you can knock out a candidate in 140 characters sent immediately to over six million of your best friends? Six million is both Trump’s Twitter following and his number of Facebook “likes.”

It’s a number that has accelerated rapidly. Last summer he had an already impressive 3.2 million followers on Twitter. By January 2016, he had 5 million and today he’s at 6.6 million, adding hundreds of thousands of followers a month. Hillary Clinton, who once led the Twitter candidate field, is close with 5.6 million, while Marco Rubio has 1.3 million and Ted Cruz languishes at 874,000.

None of these is in the same zone as Twitter royalty like Justin Beiber, Lady Gaga or the Kardashians with 40-76 million followers. The only politician in that range is President Obama at 70 million.

For a campaigning politician, Twitter is highly effective. Unlike an opinion poll, Twitter following indicates an active choice by a user. The app multiplies that by allowing people to like and retweet posts to their own followers.

Twitter influence extends beyond your own number of followers to the followers of your followers and their followers – what we can call two degrees of separation. Add to that the 20 million people who watched his TV show The Apprentice at its peak in 2004 – even the latter years got audiences of seven million or so – and it’s going to take an awful lot of coffee klatches to catch up.

Trump still operates like the “talent” on TV. He never breaks character, even when he is detected changing position, something he does often. He pushes ideas in three sentence paragraphs, using undemanding vocabulary. And so he gets praised for being the candidate that “tells it like it is.”

What is the “it” that Trump tells? From the very beginning of his candidacy to the current controversy over the Ku Klux Klan, Trump has spoken loudly for white resentment. To follow @realDonaldTrump is the counterpoint to #BlackLivesMatter for those who are starting to realize that being white no longer matters as much as it once did.

From Nixon’s “Southern Strategy” to Willie Horton and the wave of hostility to President Obama, racism has long been a component of Republican politics. The difference for Trump’s supporters is that they believe he may be willing to act on it once in office.

Echoes of Berlusconi and Murdoch

Italy’s Silvio Berlusconi leveraged his Mediaset media empire to become the country’s longest-serving prime minister since the Second World War. And British politicians have long walked in fear of tabloid tycoon Rupert Murdoch, as did their Australian counterparts before them.

Berlusconi and Murdoch alike combined soft-core titillation with authoritarian and populist politics to dramatic effect. In 1992, Murdoch claimed to have determined the result of the British election with the infamous headline: “It’s The Sun Wot Won It.” The deliberately bad English was intended to mean that The Sun‘s influence with white, working-class voters was decisive.

But the Trump effect outdistances these earlier efforts by means of the low cost of his high-reach campaign. By saying something “outrageous” on Twitter, he generates multiple retweets and favorites, making the comment newsworthy.

Trump uses social media to try out his positions. When one hits, he gains free news coverage, creating a feedback loop that has pushed him into serious contention.

What he revels in calling the “establishment” appears lost. On March 3, Republicans wheeled out Mitt Romney to push back against Trump. Before he had even spoken, Trump unleashed a barrage of sarcastic tweets, each liked and retweeted thousands of times.

Looking forward, both Republicans and Democrats are relying on negative TV advertising to swing the campaign. But no ad has had a major effect so far, one of the most notable shifts in the political media landscape.

The only candidate who has deployed new media to similar effect as Trump is Bernie Sanders. The veteran senator has a young social media team, drawn from movements like Occupy Wall Street. They’ve created #FeelTheBern filters for Snapchat, and Sanders has three times as many tweets as Clinton. Like Trump, Sanders’ team knows how to use Twitter to good effect.

In the long run, whoever wins, the new paradigm is change, not new media. Twitter is in financial trouble and may not even be around for the next election cycle. Millions of young people now watch YouTube channels, rather than network TV. Elsewhere, online access is dominated by a single app, like WhatsApp with a billion users, mostly in Europe or WeChat with a similar number in China. Facebook and other giants are vying to play this role in the U.S.

If you thought the 2016 election is different, like so many commentators are claiming, watch out. The new media reality is just beginning.

Nicholas Mirzoeff is a professor of media, culture, and communication at New York University. This article was originally published on The Conversation.