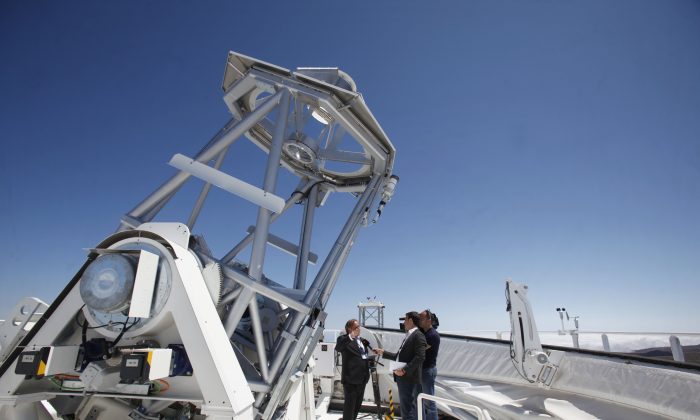 Klaus Pushmann (L), one of the constructors of German Solar Telescope GREGOR, the biggest in Europe and third largest in the world, talks to journalists during its inauguration in the National Park of El Teide, on the Spanish Canary island of Tenerife, on May 21, 2012. (Desiree Martin/AFP/Getty Images)
Science

How Do You Build a Mirror for One of the World’s Biggest Telescopes?

When astronomers point their telescopes up at the sky to see distant supernovae or quasars, they’re collecting light that’s traveled millions or even billions of light-years through space. Even huge and powerful energy sources in the cosmos are unimaginably tiny and faint when we view them from such a distance. In order to learn about galaxies as they were forming soon after the Big Bang, and about nearby but much smaller and fainter objects, astronomers need more powerful telescopes.

Perhaps the poster child for programs that require extraordinary sensitivity and the sharpest possible images is the search for planets around other stars, where the body we’re trying to detect is extremely close to its star and roughly a billion times fainter. Finding earth-like planets is one of the most exciting prospects for the next generation of telescopes, and could eventually lead to discovering extraterrestrial signatures of life.

Detectors in research telescopes are already so sensitive that they capture almost every incoming photon, so there’s only one way to detect fainter objects and resolve structure on finer scales: build a bigger telescope. A large telescope doesn’t just capture more photons, it can also produce sharper images. That’s because the wave nature of light sets a limit to the telescope’s resolution, known as the diffraction limit; the sharpness of the image depends on the wavelength of the light and the telescope’s diameter.

As optical scientists, our contribution to the next generation of telescopes is figuring out how to craft the gargantuan mirrors they rely on to collect light from far away. Here’s how we’re perfecting the technology that will enable tomorrow’s astrophysical discoveries.

The question is how to build something substantially bigger than the current generation of telescopes, which have effective diameters of 8 to 12 meters (26 to 40 feet). One of the biggest challenges is making a bigger mirror to collect the light.

First, it helps to know the basic optical layout of a telescope, illustrated here by the Giant Magellan Telescope (GMT) that is being built in Chile. A large primary mirror collects incoming light and reflects it to a focus. The light is reflected a second time by the smaller secondary mirror, to form an image on an instrument located at a safe, accessible place below the primary mirror, where the image is recorded.

A mirror much larger than eight meters, made of a single piece of glass, would be too expensive and too hard to handle. Everyone involved in building giant telescopes agrees that the solution is to make the primary mirror out of multiple smaller mirrors. Multiple pieces of glass are shaped and aligned to form one gigantic mirror, called a segmented mirror. Gaps between the segments are acceptable as long as the segments’ surfaces lie on a continuous nearly parabolic surface, called the parent surface.

The three extremely large telescope (ELT) projects now in development have made very different decisions about the design of this segmented primary mirror. Two of the ELTs, the European ELT and the Thirty Meter Telescope, have adopted the approach pioneered by the 10-meter Keck Observatory telescopes in Hawaii—they’ll make a giant mirror out of hundreds of 1.5-meter segments.

The third project, the Giant Magellan Telescope, takes a different tack. Its 25-meter primary mirror will have only seven segments. They’re the largest single mirrors that can be made, the 8.4-meter (28-foot) honeycomb mirrors we produce here at the Richard F. Caris Mirror Lab at the University of Arizona. The GMT’s 3-meter secondary mirror also has seven segments, each paired with one of the primary mirror segments.

Big mirror segments guarantee a smooth surface over their entire large areas. The more segments there are in the primary mirror, the more its accuracy depends on their precise alignment to keep them on the parent surface. Because of the pairing of primary and secondary mirror segments in the GMT, the fine control needed to form sharp images can be done by moving the small, agile segments of the secondary mirror rather than the 8.4-meter primary segments. A second advantage of the 8.4-meter honeycomb mirrors is their strong legacy, including use in what is currently the world’s largest telescope, the Large Binocular Telescope here in Arizona.

One of the challenges of using a large mirror is that it tends to bend under its own weight and the force of wind. The mirror is exposed to wind like a sail on a yacht, but it can only bend by about 100 nanometers before its images become too blurry. The best way to overcome this problem is to make the mirror as stiff as is practical, while also limiting its weight.

We accomplish this feat by casting the mirror into a lightweight honeycomb structure. Each mirror has a continuous glass facesheet on top and an almost continuous backsheet, each about one inch thick. Holding the two sheets together is a honeycomb structure consisting of half-inch-thick ribs in a hexagonal pattern. Our honeycomb mirrors are 70 centimeters thick, making them stiff enough to withstand the forces of gravity and wind. But they’re 80 percent hollow and weigh about 16 tons each, light enough that they don’t bend significantly under their own weight.

We start by melting glass into a complex mold that’s the negative of the honeycomb mirror we want to end up with. While the glass is molten, the furnace spins at five revolutions per minute; the centrifugal force pushes the glass’ surface into the concave parabolic shape that can focus light from a distant star. Watch the video below to see the construction of the honeycomb mold and the spin-casting process.

The spin-cast mirror surface doesn’t yet have the optical quality needed to make sharp images. But spinning gives it the right overall curvature and saves our having to grind out 14 tons of glass from a flat surface—almost as much glass as is left in the finished mirror.

Next we need to polish the surface to an accuracy of a small fraction of the light’s wavelength, so it will form the sharpest images possible. The mirror surface has to match the ideal, nearly parabolic surface to about 25 nanometers—about 3 ten-thousandths of the width of a human hair. That’s really, really smooth; if the mirror were scaled up to the size of North America, the tallest mountain would be one inch high and the deepest canyon would be one inch low.

To guide our polishing, the first step is to create a superfine contour map of the mirror’s surface, with steps of less than 10 nanometers. As our “ruler,” we use red laser light; its divisions are the light’s wavelength—about 630 nanometers—and it can be read to about one hundredth of a division.

The measuring instrument illuminates the mirror surface, collects the reflected light, and compares the path lengths of the rays reflected by different locations on the mirror. A ray that reflects off a high spot will have a shorter path than a ray that hits a low spot. The instrument uses this information to construct the contour map of the mirror’s surface.

The basic principle of polishing is to rub the surface with a disk-shaped tool, removing glass selectively from the spots that are too high. A fine abrasive such as rouge (iron oxide) slowly removes glass, atom by atom, through mechanical and chemical processes.

Figuring is removing glass explicitly from high spots identified in the contour map, for example by having the tool rub there longer. This is effective on scales larger than about 10 centimeters. Smoothing is what happens when you rub a stiff tool over a rough surface: the tool naturally sits on the high spots and removes more material there, even without any guidance from a contour map. This is effective on scales smaller than 10 centimeters. Both methods are more difficult when the mirror surface is aspheric, meaning its curvature changes from point to point, which is very much the case for the GMT segments.

We’ve developed several new polishing tools to address the challenges of polishing large mirrors for telescopes. One essential feature of any polishing tool is that it match the shape of the mirror surface to an accuracy of around 1 micron. The larger tool in the background is a complex electro-mechanical system that changes the shape of a stiff aluminum disk as it moves over the surface, so it always matches the local curvature of the mirror.

The smaller tool in the foreground is much simpler. Similar to Galileo’s reinvention of a carnival toy as an astronomical telescope, our new idea came from Silly Putty—a non-Newtonian fluid that flows like a liquid over a long period of time but acts like a solid on short timescales. We harness those intrinsic properties to achieve both figuring and smoothing.

Our tool, containing Silly Putty enclosed by a thin rubber diaphragm, slowly moves over the surface of the mirror while simultaneously rapidly orbiting around itself. The Silly Putty is stiff over the quick period of the orbit, which smooths out small-scale irregularities in the mirror surface. Over the longer time it takes to move across the mirror, the Silly Putty flows easily, so the tool always matches the surface’s shape. As a result, it removes glass at a predictable rate and in a predictable pattern that doesn’t vary as it moves across the mirror.

Here at the Mirror Lab, we finished making the first Giant Magellan Telescope segment in 2012. After a pause for work on two other mirrors, the lab is in the process of grinding Segments 2 and 3. Segment 4 has just finished cooling to room temperature after spin-casting in September 2015. We are well on the way to manufacturing the full 25-meter primary mirror.

Getting these near-perfect mirrors from our lab in Arizona to a mountaintop in Chile presents another set of challenges. They travel by tractor-trailer on land, and by freight ship from California to Chile. The keys to safe transport are distributing the weight of the mirror over hundreds of support points and having several layers of suspension between the mirror and the road or ship deck.

The GMT project schedule calls for a preliminary first light, with four segments installed in the telescope, in 2022. We expect all seven segments to be scanning the cosmos starting in 2024.

Many of us who work on the GMT see it as the way to open new windows into the universe, as the Hubble Space Telescope (HST) has done over the last 25 years. That orbiting telescope was a generous gift to the next generation from the people who worked on the project for decades before it launched. HST’s deep space images amazed, motivated and inspired many of us on Earth. The GMT project team dreams of passing on a similar gift for future generations.