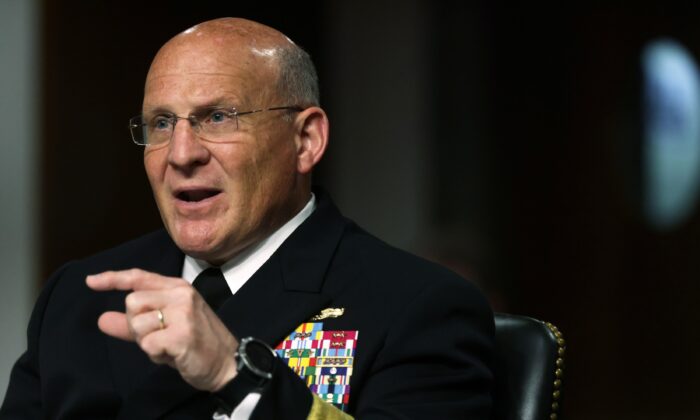 How Do We ‘De-Woke’ the US Military?

I spent 33 years in the uniform of the U.S. military. I remember my first duty weekend with the Washington State Army National Guard at Camp Murray like it was yesterday. The old F-101 Voodoo interceptor of the Washington Air Guard is still there.

In 1983, the Reagan build-up was just beginning to take hold. We were on a mission. The United States was good, and the Soviet Union was bad. Former President Jimmy Carter personified weakness, doubt, and self-loathing. President Ronald Reagan personified strength, confidence, and optimistic action. Vietnam was in the rearview mirror, the good days were back, and “Wild Bill” Casey was in charge of the CIA to unleash mayhem on the communists. Reagan ignored his advisers and winged it with his “Mr. Gorbachev, tear down this wall” speech, and the rest is history. I had no idea what National Security Decision Directive 75 (NSDD-75) was at the time, but I was living it.

It was an incredible journey for me in the national security apparatus of the United States over the years, which included time on the National Security Council at the White House. I first noticed the cancer in the U.S. military institution when I was at the pinnacle of senior military education, the Army War College, in 2009. There was a nuanced but clear narrative for all to follow. Certain words and thoughts were allowed, while other words and thoughts were on the other side of the ledger. While exhorting buzzwords such as “innovation,” “out of the box thinking,” and “speaking truth to power,” at the same time, the orthodoxy and adherence of thought and behavior was manifest.

When Secretary of Defense Robert Gates unleashed the Aug. 9, 2010, memo on efficiencies (pdf), I feel as though that was the beginning of the end of the U.S. military culture of being the firewall, defender, and advocate of apolitical, constitutional-based, Judeo-Christian values and beliefs and of being a North Star, known starting point for all that is good in the United States. Gates’s action gutted the military, identified hundreds of general officers/flag officers, senior civilians, and offices and organizations for elimination, and established “woke-ism” before it had a name.

The infamous memo threw the military into a frenzy of cannibalism, heartless downsizing, and a constant state of hyper over-deployment and under-resourcing. I remember the detailed memo very well: It targeted my own office for elimination. When a senior executive sends out an email starting with, “Don’t panic,” what do you think will happen?

One of the things also thrown out was any semblance of Judeo-Christian values. Unit chaplains were transformed into political commissars to oversee new initiatives on transforming foundational military values and institutional beliefs. Values could be anything you wanted them to be, as directed by the current administration. Gates had fired the last general of the old order, Gen. Peter Pace, and he brought in the vanguard of the new general officer/flag officer belief system, Adm. Mike Mullen, who would set the pathway for secular, progressive senior leaders who wouldn’t be constrained by any semblance of traditional values. A brave new world was upon us. It hasn’t turned out well so far.

Many (But Not All) Senior Generals and Admirals Have Flipped

The predictable, synchronized cadence of retired military senior leaders that served as part of the coordinated effort to bring down President Donald Trump was a harbinger and signal to those still on duty. After Joe Biden entered the White House, all pretense was thrown out the window. Gen. Mark Milley chose sides and navel-gazed on “white rage,” appointing himself as warrior philosopher in chief, while Adm. Michael Gilday chose critical race theory (CRT) over seamanship. Rust abounds on U.S. Navy ships, the Navy culture is enfeebled and flummoxed on how to grow the fleet from roughly 290 to 400 ships in 30 years, and collisions and accidents abound, but the Department of the Navy is “Green” on CRT training according to non-woke, retired generals and admirals.

There are generals and admirals retired and on active duty who realize the gravity of the situation. Russian President Vladimir Putin is creating a distraction, and the Chinese military is aggressively posturing for action. It took the Battle of Kasserine Pass to lop off most of the Army leadership in early World War II: Let’s hope a similar modern-day tragedy isn’t the precursor for a clean-slating of senior U.S. uniformed leadership.

My grave concern is that after the Genocide Olympics, the Chinese Communist Party (CCP) will make its overt military move, smoke-screened by Putin’s antics in Ukraine. If Milley and Gilday are serious in their sworn oaths to the Constitution, they need to reflect and do the right thing: focus relentlessly on building deterrence and, if deterrence fails, assuring victory. Otherwise, they’ll go down as the modern Gen. Walter Short and Adm. Husband Kimmel of Pearl Harbor infamy.

Most forget that the Department of Defense (DOD) is a civilian-run department, so responsibility begins with Secretary of Defense Lloyd Austin. Austin needs to reject CRT and embrace “de-woking” the U.S. military—and the center of gravity is resetting all junior, mid-level, and senior training institutions away from the zany ideology of CRT and CRT-like vestiges. This is where the cancer took hold and spread.

The spirit of NSDD-75 needs to return and replace this CRT sickness and become the new mantra at the DOD, the intelligence community, and the National Security Council. The main event is staring down the CCP and any expansionist or adventurist intentions it plans to act upon in order to distract from its own mounting domestic issues.