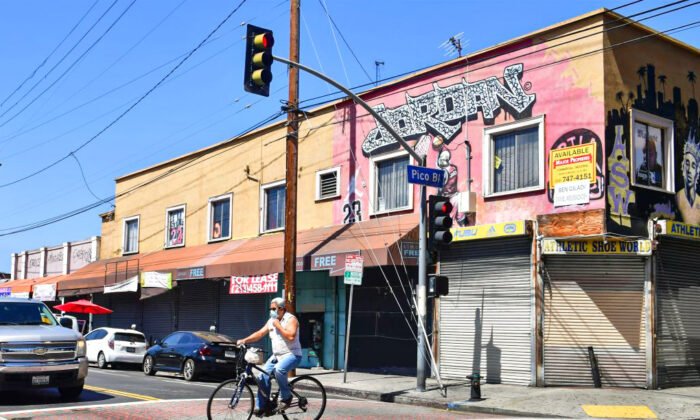 A man adjusts his face mask riding past closed shopfronts in Los Angeles on May 4, 2020. (Frederic J. Brown/AFP via Getty Images)
Southern California

How Do We Begin Again in California?

“How Do We Begin Again?” after the pandemic. That was the topic of a recent seminar/webinar on the future of California held by Zocalo Public Square at the ASU California Center in Los Angeles. Moderating was Gustavo Arellano, one of the state’s most astute and humorous commentators, now a columnist with the Los Angeles Times. Before that he was the longtime writer and editor at the now defunct OC Weekly.

Although a major anti-Trumper, he has reported on how many Latinos are among the former president’s biggest supporters, a fact some of my Latino friends could confirm.

Proof of vaccination was required to attend the live event, and the panel social distanced on the stage, indicating we may not be quite ready to “begin again.” Perhaps the actual new beginning will be when there are no more vaccine and mask mandates. On the other hand, just talking about how we must “begin again” may indicate Americas are ready to move on.

Before the seminar, I mentally listed the state’s immediate challenges once the pandemic is over: the high cost of housing, rising crime, high taxes, and generally poor schools. Let’s see how the panel looked at things.

Arellano asked the panel to reflect on how we begin again.

Debora said he never stopped in his work with gangs during the pandemic, but beginning again means “going back to the cultural knowledge” to the healing element in his community. Continued investment is necessary for gang members or formerly incarcerated men and women. “As someone who comes from that community, using the arts is a way out.”

“Change has happened, change is happening, and we all can invest” in more of it, he said.

Salcedo spoke of institutional and interpersonal violence, in which 2021 was “a record number of murders in the trans community,” more than 45. “Every day is a rebirth … a revolutionary act.” There are major “challenges with homelessness.” It’s especially challenging to those who come here as immigrants “seeking the American dream, only to have the American nightmare.”

Stanton said, “We don’t begin again until we acknowledge where we are and the losses we might have been through. That kind of acknowledgement is important.”

She works with people with cancer. They put all their energy into the treatment, to getting better. Then when it’s over, “it’s not done,” and survivors have to reflect on it.

“Beginning again is something we have done throughout our lives,” while “starting over” seems as if we haven’t done anything. But we really bring things with us, and there’s continuity.

Debora said begin again means still using the experiences that can be beneficial, rather than undoing what we have.

Salcedo said it’s a place to understand the possibilities. There is always this “begin again” process.

Stanton said it sometimes seems she’s just trying to hang on to get through these past two years, something all of us certainly can identify with.

Having gone through COVID-19 myself personally last month, as I recounted here in The Epoch Times, hanging on still often is all one can do until the worst passes.

She also sees it as an opportunity, because before at UCLA and elsewhere, “staff had to be in their offices … and we know that’s not true now” for many people. Many commuters now work at home. “And that works. How can we change systems that fit people better, so we can begin again in a way that is—some things will stay in place, but some things will change, and some things will change intentionally.”

But, she added, “Personal connection—that is important, too.”

Salcedo mentioned the importance of bringing food to people during the worst of the pandemic. Debora talked about “creative ways to adapt” when Home Boy Industries was shut down. That meant those just leaving prison had no place to go and “might head back to a life of crime.” The workers had to go to homes to manage case efforts and “drop off food at home.”

He said they also had a lot of deaths due to gang violence, overdoses, and suicides during the lockdown. “We were able to adapt.” They also “touched people’s hearts,” who then gave donations.

Stanton added getting through the pandemic will help people get through tough times in the future. She mentioned how cancer is a wake-up call for what’s meaningful in life, for people to do more of what they believe is most meaningful. The connection to the pandemic was obvious.

Debora brought up how those leaving incarceration also have to go through a new beginning.

The Q&A began with a question of what message should be given to politicians. Salcedo began by saying to the those aspiring to office, “Stop the B.S. They forget they are public servants.” Local L.A. officials got $2 billion in pandemic relief, but not enough went to the 1/3 of residents who are immigrants, he said.

When asked about self-care, Debora made the good point of not just doing one’s work, but taking care of one’s own family, so the cycle of problems isn’t “self-perpetuated.”

Asked about social isolation and the different generations, Stanton said, “It’s bad for everybody.” But young adults and teenagers, have been “hit particularly hard” because they’re just forming personal connections and networks.

This turned out differently from what I expected. As noted at the top, I listed several issues I thought were important, such as housing and crime. But the panel brought up personal and local concerns based on their own experiences living through the pandemic.

Which makes me think. Like them, the last two years I lost friends and relatives from the disease or other causes, such as old age. A friend who suffered a stroke was stuck alone for a month in the hospital because no visitors were allowed. Likewise another friend whose wife had a baby—but without him by her side. And although my COVID-19 case was moderate, a friend ended up in the intensive care unit for a week.

It also was curious Trump’s name never came up in the discussions, nor President Biden’s. So maybe I have been too political, although that has been my job for 46 years.

Yet the political issues I mentioned at the top still count. The housing issue alone makes everything else more difficult. Who can afford million-dollar homes? Most of the people I know who can are selling theirs and leaving the state.

Who could have predicted the past two years? Despite all the problems, California remains a fascinating place to work and live. The next two years should be really interesting. We need more panels like this.

The link to view the video on YouTube is here, but it begins at about 14:30.