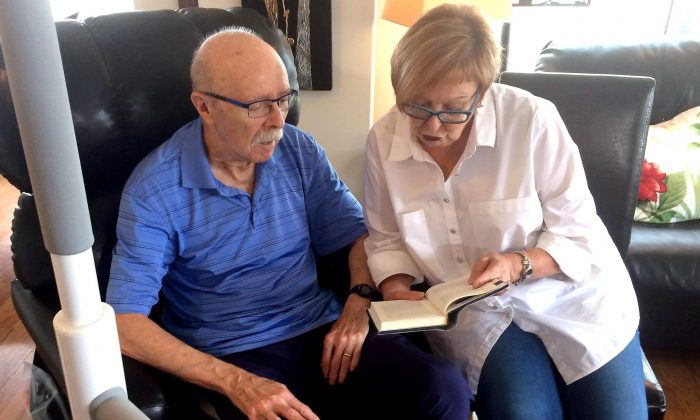 Theresa Zukauskas and her husband Walter, who has Parkinson’s disease, are shown in Halifax on Sept. 22, 2017. After the couple learned they would lose their family doctor in early November, Theresa called 811 to get on the waiting list but no doctors were available. (The Canadian Press/Michael Tutton)
Viewpoints

How Do We Address Canada’s Scarcity of Doctors?

While health care is a dynamic service characterized by the continual introduction of new drugs and medical devices, physicians remain at the centre of health-care delivery. So it’s worth noting that Canada lags well behind almost all developed countries in the availability of physician services.

Media reports of Canadians who actively (yet unsuccessfully) look for regular family doctors, as well as historically long wait times for consultations with specialists and treatment by specialists, also suggest Canadians would be better off if the relative supply of physicians increased.

However, despite recent growth in domestic- and foreign-trained physicians practising in Canada, a new Fraser Institute study projects only a small increase in the physician-to-population ratio from now until 2030, given expected population growth over that period.

Assuming that the supply of foreign-trained physicians follows its recent trend, the ratio is projected to increase from 2.74 physicians per 1,000 Canadians in 2015 to 2.97 per 1,000 in 2030. If this projection is reasonably accurate, the relative supply of physicians in Canada in 2030 will be almost 13 percent below the current average physician-to-population ratio in other wealthy countries. Crucially, the scarcity of physicians in Canada will be exacerbated by an aging Canadian population that will likely increase the per-capita demand for health-care services.

And finally, a decrease in the average number of hours that Canadian doctors work (as anticipated by the Canadian Medical Association) will make matters worse.

So what can be done to address this growing problem?

Other policies might more efficiently address the relative scarcity of physician services.

For example, greater use could be made of nurse practitioners and physician assistants, including for relatively uncomplicated medical procedures.

Another, perhaps more contentious, initiative would be to implement some degree of patient cost-sharing for basic medical services in place of “first-dollar coverage,” where government insurance covers all costs of basic medical services. Other countries with universal health-care coverage, including France, Japan, the Netherlands, New Zealand, and Sweden, practise cost-sharing. And in these countries, appropriate protections are usually established for low-income patients and those with chronic health conditions. Cost-sharing should discourage relatively unimportant uses of valuable medical resources, including physician time via doctor’s appointments and other services.

Clearly, any set of policy initiatives meant to mitigate Canada’s physician scarcity problem will take time to design and implement.

But continuing an unproductive debate about whether Canada has too many or too few doctors will simply delay needed change and contribute to even greater inconveniences and other economic costs, as Canadians wait longer and search harder for physician services.