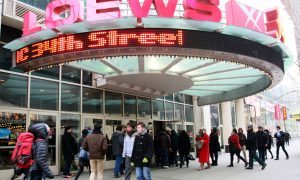 For Many, Movies Are Tradition on Christmas Day
0
Share Now
TelegramFacebookTweetEmailTellMeWeReddit
Copy Link 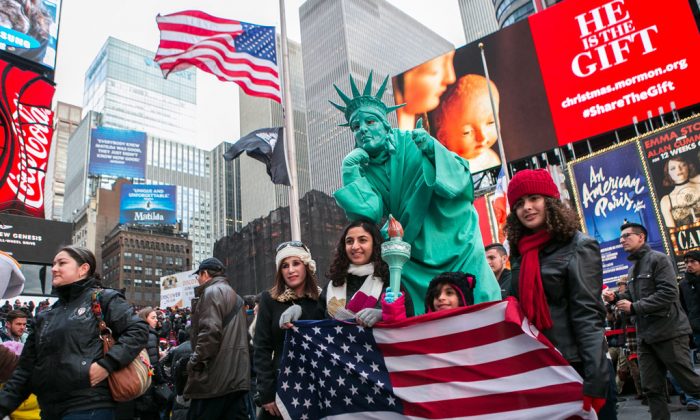 How Do NYC Tourists Spend Their Holidays?

On Christmas Day, the city is oddly desolate. Stores are shuttered, and streets that are usually jammed with the city’s inhabitants are now sprinkled with tourists and the occasional stragglers.

When museums and shopping destinations are closed, tourists head down to Chinatown, where a few restaurants, gift shops, and grocery stores remain open for them to enjoy.

“It’s so different, you don’t find things like that at home,” said Halperin. She’s visiting the city for the first time with her husband and two teenage children. “It’s always been our dream, on our bucket list,” she said.

I just like the buzz and the vibrancy.
— Dave Young, tourist

Evelyn Silva was disappointed that it didn’t snow on Christmas this year. She comes from Miami, Fla., where the weather is balmier and not nearly as evocative of the holiday spirit. “We only have one kind of weather throughout the year,” she said.

“People see New York during Christmas, the whole magical experience, so why not give it a try?” So Evelyn booked a flight for her sister, Helen, and their mother and grandmother for a “girl’s weekend” in New York City. They plan to stay for six days.

Helen loves “the spirit and the people, the vibe that’s around” during the holidays in New York. In Miami, “we don’t go all out” on the decorations, she said.

On Christmas Eve, they enjoyed a Chinese dinner in Chinatown. “They’ve never tried duck before,” Evelyn said. Today, they’re back in Chinatown for more delicious food.

Dave Young and his family are ecstatic about spending the holidays here. “You name it, we want to see it. Everything, from the Empire State in Manhattan to Staten Island, the Rockettes, everything,” Young said, who’s visiting from England.

Young and his family have pined for New York for years, and now that they are finally here, they’ve got a full itinerary planned out. Their next stop is Chinatown for a Peking duck Christmas dinner.

Young couldn’t stop gushing about the beauty of the city. “I just like the buzz and the vibrancy,” he said. “I was looking down the street at 1 and 2 in the morning and there’s still people walking, there’s still lights and neon signs. It’s just—it’s just great, you know? It’s New York, you feel great just when you say New York, don’t you?”

Although the joyous atmosphere is captivating, for Sarah from Milan, Italy, she still misses spending the time with her family. “But I phone them and write to them, so it’s like being together,” she said. She takes photos of the sites she’s visited and sends them back home.

Christmas Day is also her birthday, and this year was the time to “do something different,” said Sarah, who was wandering around Little Italy with her fiancé, Priano.

Nadeje, from Toulouse, France, also came to New York with her family to celebrate her birthday—her 40th, in fact. Her husband Julien says spending the holidays in the city doesn’t quite feel right.

“For us, it’s not Christmas because we are not at home with family,” Julien said. In Toulouse, there are much more holiday lights installed on the streets, and “when we walk around the streets, you see many, many Santa Clauses,” he said. The family hasn’t spotted any Santas in the city so far, but look forward to visiting gospel choirs in Harlem in the next few days.

Jose Serra, who’s visiting from Miami but is originally from Spain, remembers the times in Madrid when he would celebrate Christmas until Jan. 6, and took part in different traditions on each day of the holiday.

When he moved to Miami three years ago, he found the city lacking the same spirit. “That’s why Santa said let’s come here to New York,” Serra said. He said Santa gifted him, his wife, and three children the plane tickets.

Christmas in New York isn’t quite like Madrid, but it’s close enough for Serra.