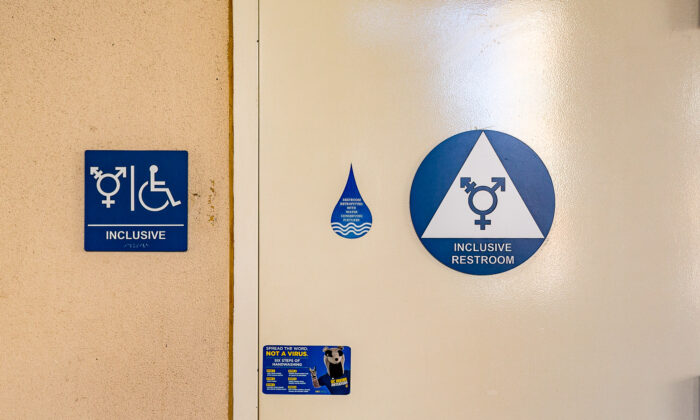 A bathroom is set aside for transgender students at the University of California–Irvine, in Irvine, Calif., on Sept. 25, 2020. (John Fredricks/The Epoch Times)
Policies & Impacts

How Different Are Transgender Policies in the 50 States?

What is the status of transgender policies across the United States, in particular in the critical area of policy toward children?

First of all, such policies are clearly among the most controversial issues of our time. For example, on Aug. 21, The New York Times Magazine’s back page featured an ad headlined “Join Us to Defend Every Student’s Right to Learn.”

The copy read: “Across America, a coordinated attack on students’ right to learn is underway right now. This year alone, 33 state legislatures have introduced over 100 new bills restricting discussions about race, gender, and sexual orientation in schools. The ACLU is hard at work challenging these damaging book bans and classroom censorship efforts through litigation advocacy.”

Meanwhile, others have a very different understanding of the situation.

Van Mol is co-chair of the Committee on Adolescent Sexuality at the American College of Pediatricians and co-chair of the Sexual and Gender Identity Task Force at the Christian Medical & Dental Association.

He said his home state of California “is among the most ideologically driven with current and pending legislation the average American would find unbelievable and unsupportable, and that the average California parent doesn’t fully know exists.”

Some gay-identified and even trans-identified adults and groups oppose California’s actions and support states that are moving in a different direction, he said.

“[This is] precisely due to the conviction that kids don’t benefit from premature exposure to, let alone indoctrination with, adult gender ideology,” he said. “States like Florida are working hard to protect young students from adult sexual ideology they have no means to resist or even see through.”

According to the Senate summary, the bill, among many other provisions, “provides that a court of this state has temporary emergency jurisdiction over a child if the child is present in the state because the child has been unable to obtain gender-affirming health care or gender-affirming mental health care.”

It also “provides that a law of another state that authorizes a state agency to remove a child from their parent or guardian based on the parent or guardian allowing their child to receive gender-affirming health care or gender-affirming mental health care is against the public policy of this state and shall not be enforced or applied in a case pending in a court in this state.”

According to writer Samantha Riedel from Them.us, an LGBT-focused publication, “All of these measures are aimed at protecting the parents of trans minors in states like Texas and Alabama, where laws and executive actions are criminalizing the provision of transition-related medical care for minors, prompting many families to weigh relocation.”

If this law goes into effect, it would clash directly with other states’ laws and could end up on the docket of the U.S. Supreme Court.

Another perspective comes from Michelle Cretella, a pediatrician on the advisory board of Advocates Protecting Children and past executive director of the American College of Pediatricians. She sees a more unified national focus, regardless of state policies.

“All public schools operate in lockstep on all matters dealing with sexuality and gender,” she told The Epoch Times. “All public schools direct their staff to socially affirm gender-confused students on day one, no questions asked, and to avoid speaking with parents unless the child directs them to do so.”

Schools that did not follow this policy in the past have faced legal action from the highest levels of government. In 2013, the U.S. Department of Justice (DOJ) during then-President Obama’s administration announced it had reached a settlement with a Southern California school district to resolve an investigation into allegations that a transgender student had not been allowed to use preferred restrooms, locker rooms, and sex-specific overnight accommodations during a school-sponsored trip.

A letter (pdf) was also issued in 2016 by the Department of Education and DOJ to school superintendents indicating federal funding could be withheld from schools that did not treat gender identity the same as sex.

“Although this [letter] eventually was rescinded by President Trump, the fear of losing money ruled the day and the damage was done. Now of course, the Biden administration is even more pro-transitioning of children than the Obama era,” Cretella said.

The two major national teachers unions, the National Education Association and the smaller American Federation of Teachers (AFT), take a similar view. In 2017, the AFT passed the resolution “Support of the Rights of Transgender Persons—AFT Stands in Unity Against Discrimination in North Carolina and Mississippi.”

For a comparison of policies across the nation, a National Equality Map—created by the Transgender Law Center in Oakland, Calif., which bills itself as the “largest national trans-led organization”—displays the status of transgender issues in all 50 states.

The map shows which states have a high number of policies largely supported by the LGBT community, such as allowing transgender youth to participate in sports activities with their preferred gender, or allowing those youth to undergo medical procedures banned by other states.

Other policies include allowing name changes for birth certificates or drivers licenses, as well as banning medical professionals or child welfare agencies from using religious exemptions to decline to serve LGBT patients. The map uses terms preferred by many LGBT advocates, so those opposed to such policies would use different terms.

Visitors to the site can click on each state to see an overview of such policies for that state or choose a specific issue and create a new U.S. map based on that single topic.

The “Gender Identity” section accessible at the top of the map grades the 50 states on a five-tier scale on issues related to gender identity. (Note: The site appears to make two mistakes, noted further below.)

Extrapolating from the map, here are the states from each ranking:

According to the organization, “the tallies look only at existing laws—they do not look at the social climate, nor do they take into account the implementation of each state’s laws. The tally also does not reflect the efforts of advocates and/or opportunities for future change.”

In other words, these policies could change in many of these states, providing a potential opportunity for active citizens to make an impact.