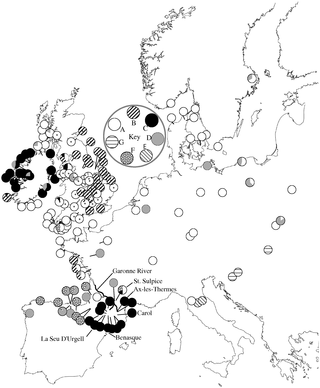 Distribution of main C. nemoralis mitochondrial lineages across Europe, showing that the snail migrated from southern France to Ireland. (Screenshot/PLOS ONE)
Science

How Did Snails Migrate 8,000 Years Ago to Ireland?

A snail in Ireland that has long confused researchers appears to have first arrived in the country around 8,000 years ago, clinging on boats humans are thought to have traveled with from the south of France to Ireland.

Ireland and the United Kingdom are separated from mainland Europe by the English Channel.

Dr Angus Davison, reader in Evolutionary Genetics at the University of Nottingham, and PhD student Adele Grindon found through a DNA study of different types of snails in Ireland and the United Kingdom that a certain type of snail–C. nemoralis, which has yellow rings on its shell—did not come from the United Kingdom or anywhere else in Europe, instead finding the snails in south France.

“There are records of Mesolithic or Stone Age humans eating snails in the Pyrenees, and perhaps even farming them,” said Dr. Davison in a statement accompanying the release of the study, which was published in PLOS ONE. “The highways of the past were rivers and the ocean — as the river that flanks the Pyrenees was an ancient trade route to the Atlantic, what we’re actually seeing might be the long lasting legacy of snails that hitched a ride, accidentally or perhaps as food, as humans travelled from the South of France to Ireland 8,000 years ago.”

“The results tie in with what we know from human genetics about the human colonisation of Ireland — the people may have come from somewhere in southern Europe,” he said.

There are other possibilities, including that birds transported the snails, or that the snails floated over on debris, but the researchers believe the human transport theory is the strongest, as there weren’t any large bird species flying between Ireland and south France, and the snails have not had particularly sticky “mucus.”

An obstacle to the human transport theory is that the snails originated 100 kilometers inland, but the researchers write in the study that this may point to the Garonne River, into which the Ariège on the northern flanks of the Pyrenees mountain range drains, being an ancient transport route. The river leads into the English Channel.