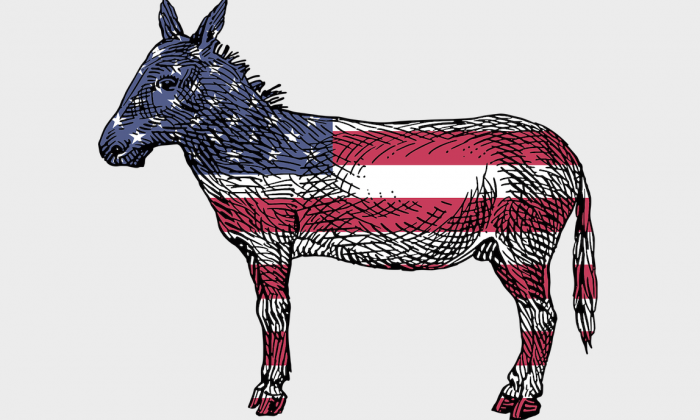 A Democratic Party donkey is shown with the American flag. (Pixabay)
Viewpoints

How Did Democrats Become So Out of Touch With the American People?

It isn’t difficult to figure out why. The republic isn’t in good shape. Unforced foreign policy blunders, such as the botched Afghanistan withdrawal, embarrass America on the world stage. Our homeland territorial integrity has never been more undermined, as a wide-open southern border permits an unprecedented flow of smugglers, traffickers, and other miscreants.

Homicides and other violent crimes, which skyrocketed in the 2020 “summer of love” riots, continue to spike; the New York subway is unsafe, and Chicago is a veritable war zone. Mobocracy runs amok; a sitting Supreme Court justice just faced a near-assassination attempt. Inflation, now at more than 9 percent and smacking those lower on the economic ladder, is at a four-decade high; the national average for gasoline is more than $4 per gallon.

Yet, amid these remarkable challenges confronting the American people, the Biden administration and Democratic Party elites would rather focus on the overarching imperatives of climate change hysteria, abortion up until birth, and a faraway war in Eastern Europe that has become utterly disconnected from the American national interest. This raises the obvious, but nonetheless crucial, question: How, exactly, did modern Democrats become this out of touch with the American people?

Energy policy is perhaps the best example. Most lower- and middle-income Americans drive cars or trucks as part of their daily commutes; they can’t resort to urban rail, let alone the “work from home” that has become a post-COVID hallmark of the professional-managerial laptop class. Bank account-busting gasoline prices directly cut into stagnant wages, affecting blue-collar families’ very ability to put food on the table.

But Biden, as recently as this month, still continues to deny new drilling permits in Alaska and the Gulf of Mexico. He failed on his recent Middle East trip to secure a durable commitment from Saudi Arabia, or OPEC more generally, to boost production. Worse, he openly flirts with declaring a “national emergency” on climate change, the ultimate upper-income “limousine liberal” hobbyhorse, notwithstanding the fact that the United States only contributes about 15 percent of global greenhouse gas emissions and the obvious reality that draconian unilateral reductions to fossil fuel extraction and usage would destroy already-battered consumers.

In a bit of loose-lipped candor, Transportation Secretary Pete Buttigieg, testifying last week before the House Transportation and Infrastructure Committee, let slip his belief that “the more pain” Americans feel at the pump, “the more benefit” there is for electric vehicle owners.

Such astounding disdain and haughtiness from a Cabinet official, if it were to come under a Republican administration, would make headline-grabbing fodder for weeks. It would dominate the late-night shows, as Jimmy Kimmel poked fun at those nasty, “Gordon Gekko-esque” robber baron Republicans.

Democrats fail to appreciate that America is truly blessed to sit atop such an abundant wellspring of hydrocarbons. To not only ignore and fail to take advantage of that blessing, but to actively thwart it and instead celebrate “pain” by focusing on the alleged virtue of electric vehicle ownership is downright evil. (Incidentally, the average electric car costs 82 percent of the median American household income.)

But energy policy, although a particularly acute example, is in this respect hardly unique. Current Democratic priorities have never been so far removed from the sensibilities of the median American citizen.

As the contentious issue of abortion returns to the states following the landmark Dobbs v. Jackson Women’s Health Organization decision, congressional Democrats rush to statutorily codify national abortion access right up until birth. George Soros-funded “progressive prosecutors,” such as George Gascón in Los Angeles and Alvin Bragg in New York, continue to fan the flames of unrest and anarchy, undeterred by last month’s stunning recall of like-minded San Francisco District Attorney Chesa Boudin. The fight for Ukraine, a deeply corrupt country with a security establishment that just endured Stalin-esque “treason purges,” is held up as the defining struggle for Western liberal democracy. Rewriting Title IX to encompass transgenderism—by executive fiat, no less—may imperil women’s locker rooms and destroy women’s sports, but is foisted upon us by the neoliberal establishment as “progress,” tout court.

The priorities of the modern Democratic Party are comically out of touch with those of the American people, who simply want safe communities, stable prices, secure borders, and to be left alone by the COVID-era biomedical security state. Democrats don’t talk about any of that, at best—and they outright impede those prerogatives, at worst. The transformation of the Democratic Party from a one-time working man’s labor party into today’s identity-politics-driven woke monstrosity didn’t transpire overnight, but that transformation is now complete. And the result is unseemly.

The dog that is the Democratic Party is manipulated by a multifaceted tail that is a grotesque fusion of criminal adulation, Gaia worship, Malthusian radicalism, eugenicist lust, and a gender ideology downstream of the worst excesses of American academia. Maybe that will play well for certain Upper West Side and West Hollywood voting precincts this November, but it won’t play very well in real America.