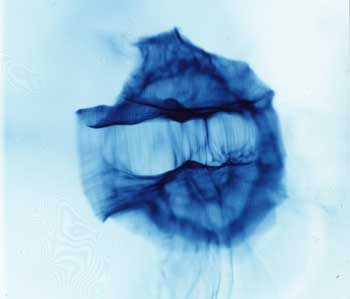 Despite the seemingly random motion of particles, a high degree of organization can be observed both under the microscope—for example in DNA—and on much larger scales, like planet formation in space.

A new international study has revealed self-organized electromagnetic fields in plasmas, or ionized gases, giving researchers an insight into the inherent order of our cosmos.

The team found that large, stable electromagnetic field structures can form within plasma flows that stream in opposite directions in the lab environment, mostly oriented at right-angles to the direction of flow.

“This observation was completely unexpected, since the plasmas move so quickly that they should freely stream past each other,” said physicist Hye-Sook Park, at Lawrence Livermore National Laboratory (LLNL), in a press release.

The mechanism behind the formation of the structures is not yet known but can be studied under controlled conditions using lasers.

“We’ve created a model for exploring how electromagnetic fields help organize ionized gas or plasma in astrophysical settings, such as in the plasma flows that emerge from young stars,” said study lead author Nathan Kugland, also at LLNL, in the release.

“These fields help shape the flows, and likely play a supporting role alongside gravity in the formation of solar systems, which can eventually lead to the creation of planets like the Earth.”

Interestingly, the structures extend much further than the plasmas and last for some time even after the streaming has ceased.

The study is part of a larger project called Astrophysical Collisionless Shock Experiments with Lasers (ACSEL), and was published online in Nature Physics on Sept. 30.