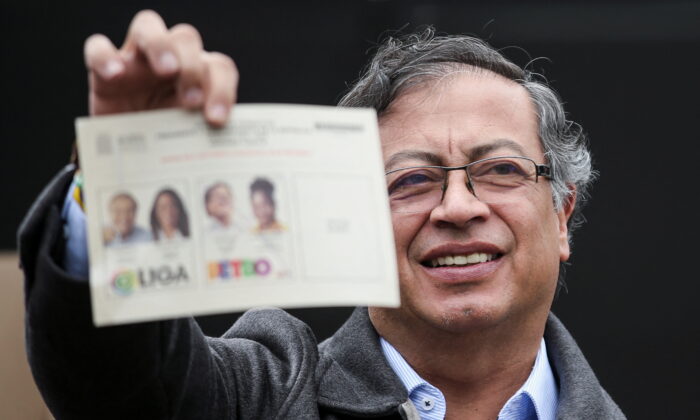 Colombian left-wing presidential candidate Gustavo Petro of the Historic Pact coalition shows his ballot before casting his vote at a polling station during the second round of the presidential election in Bogota, Colombia, on June 19, 2022. (Luisa Gonzalez/Reuters)
Thinking About China

The United States spent much of the past century in policies of containment, first of the Soviet Union, then of China, and then again with Russia. But quietly, however, the United States itself has become in many ways geopolitically isolated—contained—within the Americas.

The United States has few significant, overt outstanding conflicts—other than narco-trafficking and illegal people smuggling concerns—with Central and South American states. But as the June 19 Colombian presidential election highlighted, Washington also has no close allies in the region.

It could be said that the election of a strongly left-of-center president in Colombia signaled the final end to the memory of the Monroe Doctrine, which began in 1823 as a unilateral U.S. policy of suzerainty over the Western Hemisphere.

Significantly, the Monroe Doctrine was invoked as recently as the Trump administration (2017–2021), with the attempted—and unsuccessful—U.S. intervention in Venezuelan affairs. The timing of the change of direction of the Colombian government reflected the gradual and quiet slide of the Western Hemisphere away from U.S. influence underway in recent years. Concurrently, the governments of China, Russia, and Iran had made significant strides in their attempts to gain influence in the Americas without necessarily stirring any virulent anti-U.S. outbreaks.

Colombian voters went to the polls for two rounds of presidential election voting on May 29 and June 19. Outgoing President Iván Duque Márquez was ineligible to contest the election. As none of the presidential nominees obtained at least 50 percent of the vote in the first round, the runoff in June between the top two candidates, Gustavo Petro and Rodolfo Hernández Suárez, an independent, determined the outcome.

Petro, 62, of the Colombia Humana party, won the runoff, becoming the first left-wing candidate to become president, along with his vice-presidential running mate, Sen. Francia Elena Márquez Mina, 40. They are due to be sworn into office on Aug. 7.

Does that give Washington enough time to build a bridge with the new administration? It will be difficult, given the new president-elect’s radical and essentially anti-U.S. background.

In 1977, Petro—at age 17—became a member of the guerilla group known as the 19th of April Movement, which later evolved into the M-19 guerilla movement and then, on demobilization, became the M-19 Democratic Alliance, a political party under which he was elected to the Chamber of Representatives in 1991.

He was then elected as a senator for the Alternative Democratic Pole (Polo Democrático Alternativo: PDA) party in 2006. In 2009, he left the Senate to run in the 2010 Colombian presidential election, finishing fourth. Disputes with the leaders of the PDA caused him to leave that party, too, and he founded the movement Colombia Humana under which, on Oct. 30, 2011, he was elected mayor of Bogotá.

Colombia Humana campaigned for the presidency as part of Pacto Histórico por Colombia, created on Feb. 11, 2021, to bring together parties from the center-left, left, and far-left. Petro and Márquez won 50.44 percent of the vote. Hernández, 77, the independent who lost the second round vote, had been mayor of Bucaramanga and was campaigning under the banner of the League of Anti-Corruption Governors. He won 47.31 percent of the vote.

There was no indication that Petro planned to radically alter Colombia’s relations with the United States. Still, it was clear that he had a history of opposing earlier U.S.–Colombian activities against leftist guerilla and narcotrafficking operations and that he was predisposed to rebuilding ties with leftist neighbors in the region.

As a result, the boldness of Russian, Chinese, and Iranian links into South America and the Caribbean basin was expected to ramp up significantly following the Colombian election. The Chinese regime was already pushing Argentina to revive its claims to sovereignty over the Falkland Islands in the South Atlantic, despite the humiliating military loss Argentina suffered at the hands of the UK armed forces when it attempted to invade the islands in 1982.

In December 2021, it became evident that Beijing had begun moves to secure bases in the Atlantic in Guinea-Bissau on Africa’s central west coast and the Portuguese Azores island chain in the mid-Atlantic. It has also pushed the leftist government of Argentina President Alberto Ángel Fernández to resurrect the threat to British ownership of the Falkland Islands in the South Atlantic as a means of pulling Britain’s limited naval capabilities out of the Indo-Pacific.

As part of this, there were growing reports from Buenos Aires in June that the Argentine Armed Forces were to be reequipped with advanced Chinese-built combat and transport aircraft and other defense items to ensure that an Argentine attempt to take the Falklands would succeed.

There had been growing Chinese, Iranian, and Russian activities in the Western Hemisphere for many years. In 2017, it was noted that the deepening corruption scandal involving the sale of passports and citizenship by the government of the Commonwealth of Dominica in the Caribbean had exposed broader links into Iranian sanctions-busting operations and what could be the key covert hub of the Chinese regime’s intelligence and political action activities aimed at undermining the U.S. position in the Caribbean, the “third U.S. border.”

In the meantime, the U.S. military’s Southern Command maintains solid working relationships with many of the armed forces of Central and South America, and many of the U.S. National Guard units maintain teaming arrangements with partners in the Americas. All of that, however, is at a working level, and politics could render those close and warm personal ties null and void at a moment’s notice, as evidenced by the changes in Venezuela and Bolivia, for example.

In terms of trade, the United States is, at best, “first among equals” in trading with the Americas. China has long taken up the position of a favored trading nation. And yet, for successive U.S. administrations, the Americas have been a secondary priority, other than then-President Donald Trump’s massive revision of the North American Free Trade Agreement. And even that beneficial shake-up didn’t win Washington the hearts and minds of Mexicans or Canadians.