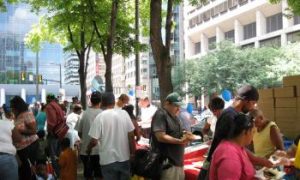 Chinese Premier Wen Jiabao chatted with eight petitioners during his visit to the State Bureau for Letters and Calls on Jan. 24. The rare move gave some petitioners hope and prompted several hundred to come to Wen Jiabao’s residence in Beijing hoping to deliver New Year’s greetings to him during the Chinese New Year Festival. However, just as in previous years, petitioners were sent to black jails.

Tianjing rights activist Ning Jinxia, who advocates Taiwanese enterprises’ rights, told The Epoch Times, “Wen Jiabao recently announced that he wanted to resolve the hardships of the people and has personally talked to petitioners. Therefore I’m in Beijing to deliver New Year’s greetings to him. Around a hundred petitioners arrived at the Yongdingmen Bus Station on Jan. 31, holding banners and calling, “Down with corruption! Down with corrupt officials!”

According to a Feb. 5 report by Voice of America (VOA), on Chinese New Year Eve, one black jail at Jiujingzhuang, was overcrowded and lacked food. Many petitioners were taken away by petitioner-interceptors, while others were transferred to other areas.

Ms. Sun Yujie, a petitioner from Harbin in Heilongjiang Province, told VOA that the regime’s interceptors ripped out clumps of her hair and beat her around the head. She was starved for over 24 hours, until they gave her a bag of instant noodles. She was rescued and released by rights activists and other petitioners on the second day of the Chinese New Year, Feb. 4.

Petitioner Cheng Wanjun’s son was sentenced to 10 months in prison for protesting against forced demolition. On the second day of Chinese New Year, Feb. 4, 65 year old Chen Wanjun from Wuxi, Jiangsu Province went to Beijing to deliver New Year’s greetings to Wen Jiabao, but interceptors from Wuxi stopped her, put her in a hotel that served as a black jail, and beat her. She called her daughter-in-law Ding Hongfen, who posted Tweets on her Twitter asking for help.

Ding told VOA that on the third day (Feb. 5) of the Chinese New Year, interceptors came and beat her mother-in-law Cheng Wanjun, snatched her cell phone and ID card, and locked her up in the Dongjiang Police Station overnight. She, along with around 10 other people later managed to rescue Cheng.

Ni told The Epoch Times, “Some petitioners and rights activists brought us candles and other basic necessities so that my husband and I can manage to live through the Chinese New Year.”

Xu Xueyan, former manager of Hengdeli Paint Factory in Wuxi, had to set up a tent for his family to live in where his factory once stood. The building was demolished by authorities last year and his family has nowhere to live. He told The Epoch Times, “The tent leaks on rainy days and is extremely cold at night. This is how we spent New Year’s Eve.”

“This Chinese New Year, I went to Beijing to send New Year’s Greetings to Wen Jiabao, and was lucky enough to get a spot in a shelter. Otherwise, I would have had to sleep on the streets of Beijing,” “Anti-corruption fighter” Zhang Jianzhong from Tianjin told The Epoch Times.

Zhang was once beaten by policemen and had his foot broken while participating in a rights activity at Tianjin Hebei District Court.

Zhang said, “Many petitioners from around the country slept on the streets, especially near the train and bus stations. Some petitioners’ blankets and personal belongings have been taken by police. How can the government be so cruel on such a cold day? Many petitioners are forced to beg on the streets. We Tianjin and Beijing petitioners brought them food and some things to keep them warm during the New Year.”