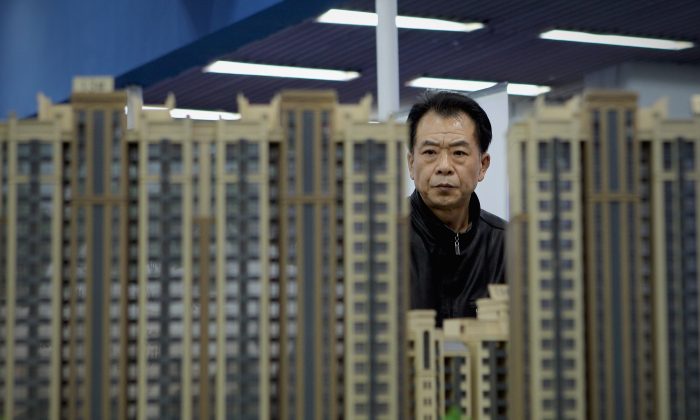 Why is the system adding more bricks to a tower that is already leaning?
By Fan Di

China has a huge real estate bubble, yet Chinese economists and the government still don’t seem to have a clear understanding of the damage, and continue to infuse more credit into sectors related to real estate.

The Chinese economy has run into many obstacles this year, including a slowdown and volatility of the RMB exchange rate. The only bright spot is the real estate market in first-tier cities, which is skyrocketing.

With a sluggish real economy, a declining manufacturing sector, and no substantial improvement in per capita income, why is real estate soaring?

New loans of 2.51 trillion yuan ($387 billion) were issued in January, the highest single month on record, and the growth rate of M2 monetary supply increased 14 percent, the highest in 18 months, according to data released by China’s Central Bank. The majority of these loans went to individual mortgages, affordable housing developments, land development, government projects, transportation, and wholesale and retail trade —with three areas directly related to real estate.

So, who are the buyers of expensive real estate in major Chinese cities? One businessman, who has bought dozens of houses, said the price of real estate in first-tier cities has skyrocketed because rich bosses have closed their companies and factories and have invested cash in real estate. Running a real business is extremely tiresome, full of risks and responsibilities, and profits are less than gains from real estate investments, he said.

In other words, this round of China’s real estate upsurge is not because of an actual demand for housing, but solely because of speculation by rich people with few investment opportunities.

However, regardless of the reason, when houses are sold, the government makes money from selling land, banks earn interest from loans, and real estate companies make commissions. It is a prosperity cycle based on credit. As long as banks continue to provide loans, those with money can make use of it and play the investment game.

The cost of housing is a basic economic indicator in China, on par with food prices. A change in housing costs directly affects the cost of a range of other commodities and services.

For example, an increase in housing costs leads to an increase in labor costs. With a substantial rise in housing and rent prices, businesses need to raise wages. Even though there is an oversupply of labor, it is difficult for businesses to recruit workers if wages are insufficient for workers to live in the city. This has been a common issue along China’s coastal industrial zone over the past decade, and it is now beginning to spread throughout the country.

Rising wages, in turn, increase manufacturing costs, and this has hindered much needed industrial upgrading, weakened the relative advantage of labor-intensive industries, and led to more unemployment.

Rent increases and lack of consumer demand have also caused trouble in the commercial retail and service industries. Commercial rents are not only high in first- and second-tier cities, but also in third- and fourth-tier cities and towns, making it difficult for many small businesses to remain profitable.

How China Is Causing Real Estate Bubbles Around the World

China’s urbanization push is also affected by high real estate costs. While people generally blame the household registration system for preventing farmers and migrant workers from moving to the cities, in actuality it is the high cost of housing in the cities that hinders them. With an average monthly wage of about 2,000 yuan ($308), a migrant worker has to spend approximately 50 percent of his income on housing.

When poor people have trouble making ends meet and hope for lower rents, does it make sense to lend money to the wealthy to speculate and make a big fortune in real estate? When small and medium enterprises need funds to maintain their operations, does it make sense to pump money into the real estate sector that will hike up the costs for small and medium enterprises? Real estate speculation does not improve the economy or the lives of the majority of people.

Fan Di is an independent economist and part-time professor of Peking University and Sun Yat-sen University. He obtained a Ph.D. at the University of California, Berkeley, supervised by Li Yining of Peking University and Nobel Prize winner George Arthur Akerlof. Fan has been a senior executive and consultant at major banks, financial firms, and large companies. This is an abridged translation of an article posted on March 7, 2016 to his public WeChat account.