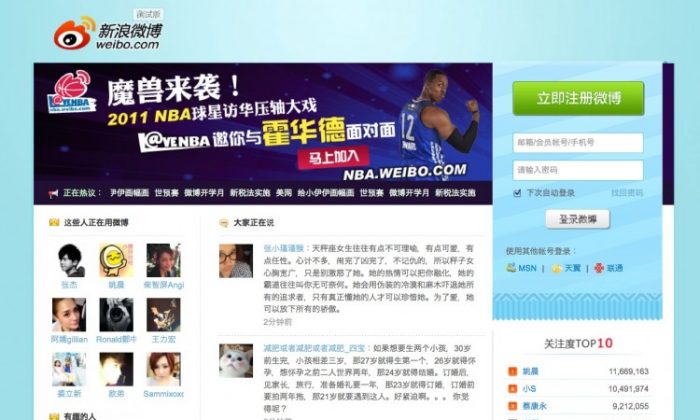 It is not clear how many Internet bloggers the Chinese regime has hired, though some estimates run into the hundreds of thousands.  (Screenshot from Weibo.com)
China

The number of Chinese Internet users soared to 513 million in 2011, and half of them use micro-blogging services, according to official statistics.  Ever wary of this powerful new media and its implications and influence over public opinion, Chinese authorities have made tremendous efforts to gain and maintain control of the virtual battlefield. Besides the Great Firewall, a less obvious tactic employed is the use of paid web commentators, known as the fifty-cent army, or Wu Mao.

It is unclear when the Chinese regime started using commentators systematically, but the earliest known record can be traced to 2004 when the Changsha municipal government built a web commentator team, according to an official report. The commentators were required to not only post opinions and news with a spin, but contact public websites to delete “harmful” posts in order to maintain the regime’s positive image, the report said. Each commentator received a 600 yuan (about US$100) monthly base salary. The report was later removed from the official website, but not before it was widely circulated by netizens.

Other universities followed suit. In 2005 Nanjing University officials closed a student-run Internet bulletin board system, or BBS, which refused to “harmonize” (a euphemism for censorship) its content. When they launched a new official version using the old domain name, school authorities appointed student cadres and a few “enthusiastic” individuals to be web commentators. They received payments based on monthly performance evaluations.

The responsibility of web commentators at Nanjing University was to “neutralize” information critical of the authorities by posting positive information, replying to posts, and by “establishing an active and healthy” university web environment.

It is not clear how many Internet bloggers the Chinese regime has hired, though some estimates run into the hundreds of thousands.

During a Politburo meeting on Jan. 23, 2007, Chinese leader Hu Jintao demanded the “reinforcement of the ideological and public opinion front and the construction of positive publicity” (also translated as “propaganda”).

The size of these teams varies greatly by region. Early on, such teams were reported to consist of 10-30 people. But in June 2009 Beijing announced plans to recruit 10,000 Internet monitors, and announced that other cities would soon follow its example.

An internal document issued in May 2009 warned local governments that, “the Internet could drastically change the public’s opinion of the Party and the government.”

Well-known Chinese blogger Han Han made fun of the Gansu authorities’ announcement of their secret force. The news was quickly removed from the official site, but was widely circulated by netizens.

A number of internal training material and guidelines for Internet commentators have been published in recent years. Though it is difficult to prove their authenticity, these materials seem to accurately summarize key principles and tactics often employed by Internet users identified as pro-regime commentators.

New fifty-cent blogger recruits are told in the training manuals to “thoroughly understand” instructions from the leaders and faithfully execute orders; to stay immune to dissident thoughts and remain unswervingly loyal to the Party.

“Cherish your own political future,” one document said.

Students are also asked to “use various skills to hide [their] identity and pretend to be an ordinary netizen,” one document says. They are to “expand [their] online influence through networking with other netizens, especially influential bloggers.”

Common techniques listed in the training materials include “inspiring hostility and fear” for democratic countries, labeling dissidents as traitors, creating debates or controversy of trivial matters to distract attention from politically-significant topics, and encouraging nationalism.

There are also major projects or themes, for which talking points are developed. One document listed techniques on how to attack democracy, for example. It included arguments like: “Democracy is the Western world’s weapon to invade China,” “there is no real democracy,” “democracy leads to turmoil and chaos,” and “democratic countries also have corruption and crime.” All these arguments closely shadow official Party propaganda.

One individual identifying himself as a paid web commentator told dissident artist Ai Weiwei in an interview that a fifty-cent blogger typically has many different online IDs, and in order to stage dramatic online debates often plays different roles.

When the government raised gas prices, for example, this person was instructed to control negative comments. In one remark he said: “I don’t care. It should rise more, so you poor people can’t afford to drive and it’ll free up the roads. Only the rich should drive.” Then he used several other IDs to quote and attack his own comment. His strategy worked: people attacked the provocative remark instead of the Communist Party, and the discussion was diverted away from the high gas prices.

“I usually debate with myself … It’s like playing a mind game,” he said to Ai Weiwei.

Another strategy he cited is to use apocryphal details when citing negative news reports, in order to undermine the story.

The blogger also said that 10 to 20 percent of the comments he sees online are by paid commentators. “Chinese netizens are really quite stupid. They become easily agitated. I can very easily control them,” he said.

Though he justified his work, he also said he thought the Chinese regime had gone too far on certain issues, such as carefully-crafted attacks against the Falun Gong spiritual practice and the Dalai Lama.