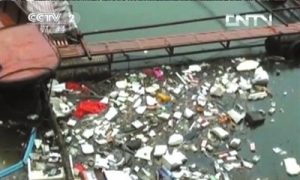 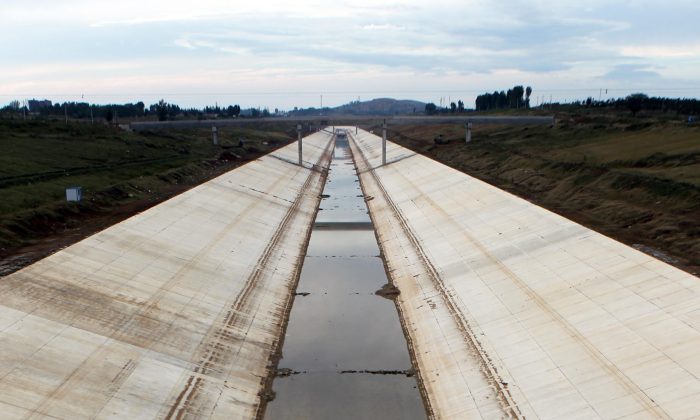 A canal used for South-to-North water Diversion plan in Nanyang, central China's Henan province, on Sept. 27, 2013. The colossal project is said to have become a waste of taxpayer money (AFP/AFP/Getty Images)
China

It appears that the Chinese regime’s grandiose South–North Water Diversion Project, which aimed to annually transfer billions of cubic meters of freshwater from the Yangtze River in the south, to the arid north, is a massive failure.

First proposed by Mao Zedong in the early 1950s, the idea was later taken up by engineers and bureaucrats as a way to solve the chronic water problems of the north. But looked at from the perspective of either economics or engineering, the megaproject, consisting of three separate routes of canals that snake across the country—eastern, western, and central—is a fiasco. It has already swallowed up more than $79 billion in construction money and is one of the world’s most expensive infrastructure projects.

In some places, the water has to be pumped to lift it to higher elevations, which consumes tremendous amounts of electrical power. This makes the water so expensive that nobody wants to purchase it. But even worse, of the estimated 44.8 billion cubic meters of freshwater the canals were supposed to deliver to the north annually, only a fraction may actually get there due to slow flow rates in parts of the canals.

These issues were put into sharp relief in an analysis on the Chinese Internet published by Ma Kean, a well known researcher of environmental issues in China. He reviewed the results of a trial run of the central route project at the end of 2013–reaching from the upper Han River to Beijing and Tianjin—and convincingly showed how it was a failure. His criticism wasn’t welcomed, however. The failure was covered up, and experts with ties to the regime came out to denounce Ma for his conclusions.

By not justifying the South–North Water Diversion Project economically, Chinese officials can declare success if only one bucket of water makes it to Beijing.

First of all, the flow rate of the main canal of the central route is too slow, he said. Therefore, the transferred water volume won’t meet the expected annual target.

Ma also argued that large amounts of sedimentary deposits will build up and obstruct the flow. This argument is refuted by scientists affiliated with the project.

Finally, Ma raised the problem of canal freezing during winter, which will also obstruct flow. There have long been plans in place to deliver water during freezing periods, controlling water levels and flow rates when temperatures rise, attempting to ensure that ice caps melt, and to avoid ice dams. This is a highly sophisticated process that sounds like someone standing on his head on horseback. We hope these professors, scholars, and experts navigate carefully.

Each of the objections was refuted by regime-affiliated scientists, though it is not clear that the project is indeed free of the problems Ma highlighted.

But most importantly, Ma argued that the project must make sense economically. With no financial benchmarks, it could mean that “it would be considered a success as long as one bucket of water made it to Beijing.”

Official data obtained from 25 days of operations on the eastern route in late 2013 show that a total of 34 million cubic meters of water were delivered, amounting to a flow rate of only 15.75 cubic meters per second. This means that continuous water supply throughout a year would be less than 500 million tons of water–or less than 5 percent of the target of 10 billion tons per year. “This is a complete failure,” Ma writes.

The government’s experts and scholars all avoided addressing this issue. If the yield was so low, does it mean there are flow speed problems in all upper, middle, and lower sections?

Then there is the matter of cost: Once this water makes it to the north, it’s so expensive that no one wants to buy it. “After the [test] water transfer concluded on Dec. 10, 2013, the canals were shut down. Water is not running, but is ‘basking in the sun,'” Ma wrote.

“The east route requires powerful pumps to lift the water in order to send it north. Pumping water vertically consumes a huge amount of power. Who will pay for the electricity? No one is willing to pay,” Ma said. “In addition, the transferred water is muddied with heavy pollution. No one wants to buy it at a high price,” he added.

This is a serious problem, but none of the scholars have dealt with it.

“If we use the estimate of 1.54 yuan, the average price to consumers in Shandong would be 6 yuan, much higher than local water prices,” Luo said.

Local officials have come up with a number of ideas for how to solve the high water cost. The most popular one proposes that the base price be shared among the central, provincial, and local governments; end users would only bear the cost of metering water. But doesn’t the money at all levels of government come from taxpayers’ pockets as well? It’s the people’s money that’s been quietly used to pay for this giant project. There was no discussion or asking for people’s input before it got started. Why are people forced to pay for this?

The South–North Water Transfer Project is now popularly referred to as “basking in the sun,” referring to how immense amounts of water pumped into canals simply sit there and evaporate. Will this nearly completed central route be able to avoid the fate of the eastern route? Even if it does fail, I do not think there will be any acknowledgement of failure from officials. The loss will simply be passed on to the people.

This is an abridged translation of Zheng Yi’s article published on the website China In Perspective.

Zheng Yi is a well-known Chinese researcher, author, novelist, and historian who lives in exile in the United States. He is author of the book “Scarlet Memorial: Tales Of Cannibalism In Modern China,” about cannibalism in Guangxi Province during the Cultural Revolution, and “China’s Ecological Winter,” about the destruction of the environment across the country.