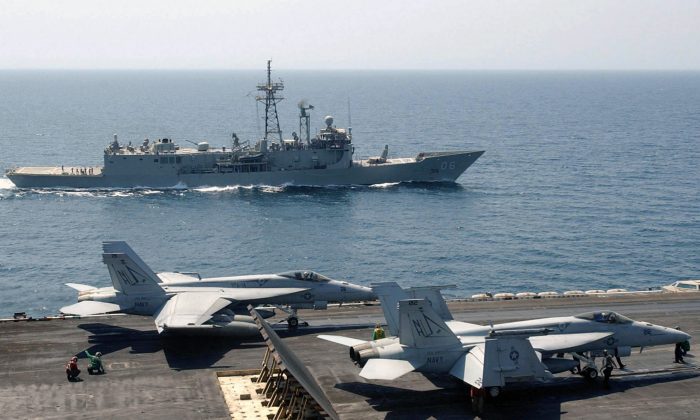 A frigate of the Royal Australian Navy at sea with the USS Nimitz aircraft carrier in 2005. (US Navy)
China

Ever since World War II, when Australians fought in close coordination with American troops, the continent-sized nation has played a critical role as a strategic partner for the United States in the Asia-Pacific region from Korea to Vietnam, and then beyond, to Afghanistan and Iraq.

When it comes to handling the deep-pocketed, assertive, and increasingly belligerent mainland Chinese regime, what the relationship between Canberra and Washington faces goes deeper than military challenges from the People’s Liberation Army.

In spite of decades of close relations between the two Anglophone giants, Chinese economic influence and soft power combined with shifting political attitudes in Australia may have given Beijing levers of influence it seems to be eager to exploit.

Both China and the United States have raised their profile in the region. China has built up bases and ships in the disputed South China Sea, to which America responded with a change in strategy in 2013–the pivot to Asia. And pressure has mounted on Australia to take a stand.

A third of Australia’s foreign trade is with China, and Australian politicians, who have no legal barriers on whom they are allowed to accept donations from, have been reported as receiving money from Chinese organizations and individuals connected to the Chinese regime’s leadership.

At the same time, Australian media warn of think tanks, media, and schools putting a rosy tint on public perceptions of China. In a recent survey by the US Studies Centre, Australians regarded with equal suspicion the roles of the United States and China in helping or harming Asia.

A recent article published by the Australian Business Review contrasted recent expansions to Canberra’s military budget (13th-largest in the world at about $22 billion) and increased moves to cooperate with Asian countries that share discomfort at China’s territorial claims, with the public’s concern with domestic and economic issues.

“There is a large and growing gap between government policy and popular sentiment,” as the piece put it.

In the US Studies Centre survey mentioned above, respondents were significantly more likely to agree that a stronger relationship with China is a preferable to choosing the United States.

The Australian Business Review had a different reading of the situation, writing, “The public remains largely ambivalent, preferring to avoid having to choose between their ally and their economic benefactor.”

Carrots and Sticks From Beijing

As Australians and their public officials weigh mixed feelings and priorities, Chinese business interests, military ambitions, and propaganda outlets are on an offensive that is hidden in plain sight.

Between 2013 and 2015, Chinese companies and associations gave 5.5 million Australian dollars (about $4.1 million) in sponsorship to Australian politicians, as reported by Australia’s ABC News.

As reported on Aug. 30 by the Sydney Morning Herald, when Senator Sam Dastyari of the social-democratic Labor Party overspent his state-provided travel and daily accommodation allowance last year, the extra was paid for by Top Education Institute, a Chinese private educator based in Sydney and headed by a Chinese communist official, Zhu Minshen. That was only one of several favors Dastyari has received from China, which he has visited multiple times. In January, he went to Beijing on a flight courtesy of the International Communist Party

“Chinese interests have effectively subsidised the work of the Australian Parliament,” the Sydney Morning Herald said.

Zhu is also a senior adviser to Sydney’s Confucius Institute, one in a nexus of hundreds of Chinese regime-sponsored overseas programs scattered around colleges and schools worldwide. Critics say the Institutes entice local administrators with low-cost language education and then promote Communist Party-approved narratives, shutting out the voices of Chinese dissidents, minorities, and Taiwanese.

In May, China Daily, an English-language arm of the Chinese state media, made a deal with Fairfax Media and other major Australian newspapers to include an 8-page insert in their publications.

Chinese-language media in Australia show Beijing playing a strong role. According to the Sydney Morning Herald, 95 percent of the available newspapers are at least partially controlled by Beijing.

Related Coverage
China Wants to Control What You Watch

With the combination of economic sponsorship and propaganda influence in Australian society and politics, Beijing has real geopolitical leverage over Canberra if push comes to shove in Asian disputes. Australia may not be able to back up its allies if the political will to do so has already been compromised.

In a previous interview, a source close to American intelligence told Epoch Times that behind the scenes, China uses threats to set the tone of its relationship with Australia. “You should partner with China. We’re so close. If something were to happen, the U.S. wouldn’t get here in time to save you,” the source summed up Beijing’s rhetoric.

If Australia steps into the South China Sea waters, it will be an ideal target for China to warn and strike.
—  Global Times

This July, tensions rose in the disputed South China Sea following a U.N. ruling that denied China’s claim to nearly the entire region. After the Australian government voiced its support for the ruling, Chinese propaganda shot back, with English-language tabloid Global Times calling Australia a “unique country with an inglorious history.”

In a scathing editorial titled “‘Paper cat’ Australia will learn its lesson,” the Global Times not-so-subtly flaunted China’s economic weight, saying that “Australia has inked a free trade agreement with China, its biggest trading partner, which makes its move of disturbing the South China Sea waters surprising to many.”

“Australia is not even a “paper tiger,” it’s only a “paper cat” at best. At a time when its former caretaker country the UK is dedicated to developing relations with China, and almost the whole of Europe takes a neutral position, Australia has unexpectedly made itself a pioneer of hurting China’s interest,” the Communist Party-run tabloid went on.

“If Australia steps into the South China Sea waters, it will be an ideal target for China to warn and strike.”

These combative comments contrast with statements made last year by former Chinese ambassador Ma Zhaoxu, who told The Australian that “China is not a strategic threat to Australia but a comprehensive strategic partner. We enjoy tremendous common interests between our two countries.”

Whatever the color of political stripes and domestic leanings, Australian leaders have thus far maintained the country’s strong regional capabilities and connections.

This, in addition to North Korea’s “very unpredictable nuclear-armed dictator” made things “much more difficult” for Australia and its American ally, the Australian Financial Review reported him as saying at a presentation given in Washington this April.

Clashing with pro-Beijing views that Australia should “loosen its defence ties with America to make way for China’s economic rise,” as the Review said, Shearer recommended that military cooperation and coordination with the United States be expanded.

Australia signed a deal with France in April to purchase advanced attack submarines—an unexpected event in light of previously anticipated negotiations to buy the Japanese Soryu-class. Though the latter deal never came to fruition, it is significant in showing the Australian government’s desire to warm up to Japan, and simultaneously represents a not-so subtle flexing of Japanese military muscle.

Post-World War II, Japan has allowed itself to export arms only since 2014 when Prime Minister Shinzo Abe, a statesman known for his hard stance on China’s provocations over a chain of islands near Okinawa, successfully amended the country’s pacifist constitution.

Meanwhile, there are indications that despite Chinese money in Australian business and society, bribery can only go so far in these parts.

In late August, Reuters reported that China’s ambassador to Australia Cheng Jingye had met with Prime Minister Malcom Turnbull and requested that he “avoid protectionism” a week after two Chinese firms were blocked from buying stakes in a major local power grid. Earlier, an attempt to buy a large cattle company had also been rebuffed.

On Aug. 29, a chairman of a Chinese property developer urged Chinese-Australians to better utilize their wealth to influence local politicians.

“The Australian Chinese community is inexperienced in using political donations to satisfy political requests,” wrote Huang Xiangmo, who heads the Yuhu Group and has donated over a million dollars to Australian politicians. His words appeared in an editorial for the Global Times.

While Huang asserted that it was unfair to associate Chinese money with the Chinese regime, he has given $1.8 million to establish the Australia-China Relations Institute at the University of Technology Sydney, the Australian Financial Review reported. This institute advocates a “positive and optimistic view of Australia-China relations” and replaced a previous Chinese studies department that was more critical of Beijing.

“We need to learn … how to have a more efficient combination between political requests and political donations,” Huang wrote.