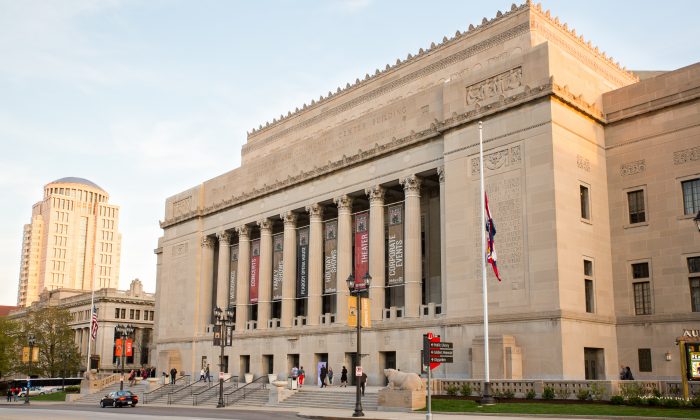 The Peabody Opera House in St. Louis, Missouri. The Opera House was recently subject to demands by the Chinese consular officials from Chicago to cancel Shen Yun Performing Arts, scheduled to perform there from Feb. 20-22. (Hu Chen)
China

Chinese officials are throwing their weight around in the United States, using overt demands, and possibly dirty tricks, to try to disrupt a Chinese artistic performance that they don’t like and can’t control.

Last Friday morning, on Jan. 30, officials from the Chinese consulate in Chicago met with a manager at the Peabody Opera House in St. Louis, Missouri, and demanded that they cancel the booking of the New York-based Shen Yun Performing Arts—or else it would harm relations between the United States and China.

A few days later the main presenter for Shen Yun performances in two cities had her house broken into—the only items taken were her laptop and passports.

Both incidents were linked, say presenters of the Shen Yun shows, and follow a persistent pattern of interference and harassment mounted by Chinese diplomatic outposts.

Shen Yun is a popular performing arts company whose productions feature classical Chinese dance with live orchestral accompaniment. It travels across the United States and the world.

Shen Yun will still perform at the Peabody Opera House from Feb. 20-22, after the manager who met with the officials rejected the demands of the Chinese officials. The meeting was recounted to the presenter of the Shen Yun performance in St. Louis, Peng Su, by the manager who was the target of the attempted suasion.

Peng, an IT specialist who has lived in the United States since the 1990s, recalled her conversations with the manager in several telephone interviews. She said that the consular officials told him that if the show performed, it would “damage the China-US relationship.” They also attacked Falun Gong, a spiritual practice whose story of persecution in China is sometimes included in Shen Yun performances.

The Chinese Regime’s War on Dance

Shen Yun has performed at the Peabody Opera House since 2012, and Peng said she alerted managers there that they may one day be approached by Chinese officials. She said that the theater rebuffed the entreaties to cancel the program.

A manager at Peabody Opera House said that the opera house had no comment.

Shen Yun’s performances have been dogged by similar forms of interference for years. One of the shows emcees, Leeshai Lemish, maintains a blog called “Who’s afraid of Shen Yun?” which keeps a running tally.

A typical entry reads: “Spain, Barcelona. April 9-12, 2014. Ahead of Shen Yun’s debut in Spain, the PRC consulate in Barcelona attempted to pressure both the national theater and the foreign ministry to cancel the performances.”

In North America, Shen Yun has dealt with other forms of interference, like finding deep slits in its bus tires in 2010 in Ottawa, the kind that would only rupture once the vehicle reached high speed, Shen Yun officials said.

“They left my pearl necklaces in the drawers. And once they got the passports, they didn’t go to the other nightstand.”
— Lucy Guan, presenter of Shen Yun in Wisconsin

A separate incident in the Midwest has no such direct connection with Chinese officials—but Lucy Guan, whose house was robbed, suspects that the Chinese regime was behind the theft of her laptop and passports.

The theft took place on Feb. 3, at some point during the three hours she left her house in the evening (the door was left unlocked, as is common in her quiet and safe community of Madison, Wisconsin.)

Guan is an AutoCAD (computer-assisted design) specialist in the telecommunications industry. She’s also the president of the Wisconsin Falun Dafa Association, and so is this year presenting Shen Yun’s performances in Appleton and Milwaukee.

When the police arrived and found what had been stolen, one of the officers remarked that it was a “strange case,” and that they had never heard of the theft of passports, Guan recounted. The police also said that thefts are rare in her community.

Her new American passport was stolen, along with three former Chinese passports that are all quite unusable—except to gain information about her: “It’s got everything about where I’ve traveled. It’s got my Chinese name, where I was born, my exact identity.”

She said that Chinese security officials could use this information to locate her family in China and threaten them—”that way maybe they think I won’t help put on the show here,” she said.

Her computer—an Apple Macbook bought in 2010—was also stolen. It was full of details of her contact with family members in China, and information related to Shen Yun promotion work she now fears has fallen into the hands of Chinese officials.