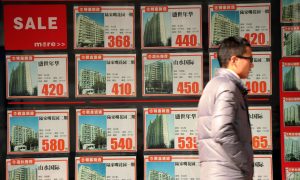 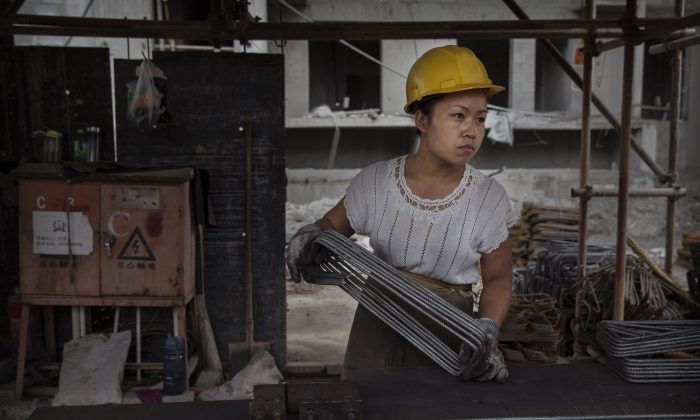 A Chinese female construction worker works at the building site of a new apartment complex in Beijing on Aug. 29, 2014. (Kevin Frayer/Getty Images)
China

How China Is Causing Real Estate Bubbles Around the World

Will the Chinese economy have a hard landing? Absolutely not, according to Xu Shaoshi, director of China’s state economic planning agency. A hard landing for China’s economy is not a possibility, and neither is it possible that China’s slowdown will drag down the global economy, Xu said at a news conference during the annual “Two Meetings,” the de facto legislature of the Communist Party.

Despite how much has already been written about China’s economic slowdown, Xu’s statements require a response.

The Impact of China’s Economy on the World

Let’s take a look at the past first. In the past 30 years, China has accepted foreign investment to fund development through its “opening up” policy. China then joined the World Trade Organization (WTO) to export cheap goods to the world. In the mid-1990s, when China had accumulated enough profits and power, it started making strategic investments to acquire resources and enterprises around the world. Although there were more failures than successes, China’s huge capital outflows have been a significant force.

Viewed from different perspectives, China has had both a positive and a negative impact on the world economy. Inexpensive goods manufactured in China at the turn of the century indeed benefited consumers all over the world for about seven to eight years.

On the downside, however, substandard and toxic products have led to boycotts and loss of credibility beginning around 2005. There were the toys containing high levels of lead, followed by melamine-tainted milk powder and feed, pesticide residues and other toxic substances in textiles and leather, problematic drywall, and more. In short, China has constantly been subject to complaints via the World Trade Organization, and this was one of the reasons prompting the United States to set up the Trans-Pacific Partnership—a hope to bypass China and establish another international trade organization.

Since 2009, when it largely stopped being the world’s factory, China became the world’s largest money printer. In 2012, when this strategy was no longer sustainable, China was left with an inventory of 9.83 billion square meters (105 billion square feet) of vacant real estate and dozens of industries loaded with excess capacity.

China was set to expand trade with over 30 countries around the world. But these countries are now either in turmoil, war, or economic recession. As a result, China is no longer in a position to be a major raw materials importer and thus stifles the world economy. Of course, one cannot say that this is China dragging the world economy down. But the dreams that China would become the world’s economic engine have been dashed.

China’s real estate market also indirectly affects the world. Real estate prices in Beijing, Shanghai, and Shenzhen have recently soared. For example, the total market value of all homes in one Shenzhen community climbed to 14 billion yuan (US$2.1 billion), nearly matching that of Shenzhen’s airport, which is approximately worth 14.8 billion yuan ($2.2 billion). How can housing prices rise so incredibly high? It’s because Chinese are maintaining the high prices by taking out cash loans against the bubble-priced assets and then moving money out of the country. The capital escaping from China’s housing market will affect the world.

Since the end of June 2014, when China’s foreign exchange reserves were $3.99 trillion, there has been an outflow of nearly $790 billion. Such a huge flow of funds around the world is going to have a large impact. Where did this money go? Part of it was used for investments, mainly in real estate, which has been pushing up housing prices around the world.

The overseas investments of Chinese real estate enterprises totaled about $22 billion in 2013 according to the 2015 China Enterprise Globalization Report. In 2014 it reached nearly $40 billion, with $28.6 billion going into the U.S. market. Led by giants such as Vanke, Wanda, and Greenland Holding, Chinese real estate firms invested as much in the first half of 2015 as in the whole of 2014.

According to a Sept. 7, 2015, article by Caijing National Weekly, wealthy Chinese are buying homes in more than a dozen overseas countries or regions, including the U.K., Australia, and Dubai. On Jeju Island in South Korea, Chinese owned 20,000 square meters (215,000 square feet) of properties by 2009. At the end of April 2015, the area rose to 11.73 million square meters (126 million square feet), an increase of nearly 600 times in six years.

The money being created by China’s state printing press is flowing around the world. Real estate prices in China have long deviated from their actual value. A small 150-square-meter (1,600-square-foot) apartment in Beijing, Tianjin, Shanghai, and Shenzhen is listed for about 6 million yuan ($920,000). For this kind of money, one can buy a single-family home three times the size on the East or West Coast of the United States (except for places like Manhattan and San Francisco) with a large garden and pool. Faced with this reality, Chinese real estate investments are bound to flood the globe.

The fact that China is no longer purchasing large amounts of global commodities may not be really dragging down the world’s economy. However, when rich Chinese invest huge amounts of cash in other countries’ real estate markets, they are causing bubbles. Eventually, locals won’t be able to afford a home, and the country will be impoverished. Can this not legitimately be called a drag on the global economy?

This is an abridged translation of He Qinglian’s Chinese article posted on her personal blog on March 13, 2016. He Qinglian is a prominent Chinese author and economist. Currently based in the United States, she authored “China’s Pitfalls,” which concerns corruption in China’s economic reform of the 1990s, and “The Fog of Censorship: Media Control in China,” which addresses the manipulation and restriction of the press. She regularly writes on contemporary Chinese social and economic issues.