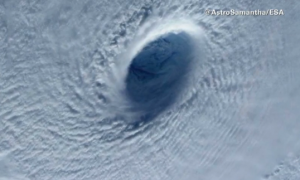 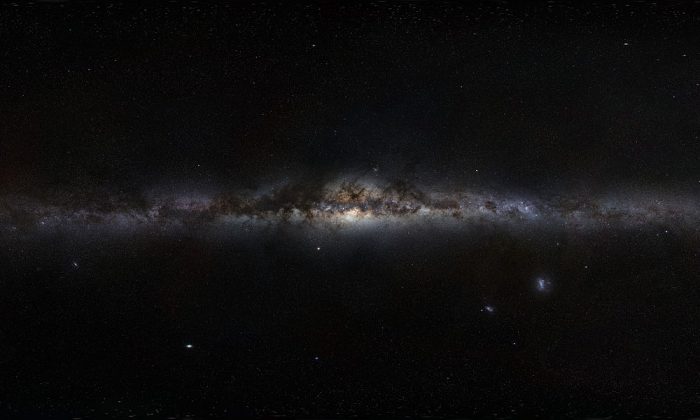 Our solar system moves within the Milky Way, pictured here, and every 30 million years there are problems. (European Southern Observatory, CC BY 4.0/Wikimedia Commons)
Science

How Can Dark Matter Cause Chaos on Earth Every 30 Million Years?

In 1980, Walter Alvarez and his group at the University of California–Berkeley, discovered a thin layer of clay in the geologic record, which contained an unexpected amount of the rare element iridium.

They proposed that the iridium-rich layer was evidence of a massive comet hitting the Earth 66 million years ago at the time of the extinction of the dinosaurs. The Alvarez group suggested that the global iridium-rich layer formed as fallout from an intense dust cloud caused by the impact. The cloud of dust covered the Earth, producing darkness and cold. In 1990, the large 100-mile diameter crater from the impact was found in Mexico’s Yucatan Peninsula.

The timing of this impact, together with the fossil record, have led most researchers to conclude that this collision caused the mass extinction of the dinosaurs and many other forms of life. Subsequent studies found evidence of other mass extinctions in the geologic past, which seem to have happened at the same time as pulses of impacts, determined from the record of impact craters on the Earth. And these coincidences occurred every 30 million years.

Why do these extinctions and impacts appear to happen within an underlying cycle? The answer may lie in our position in the Milky Way Galaxy.

Our Galaxy is best understood as an enormous disc. Our solar system revolves around the circumference of the disc every 250 million years. But the path is not smooth, it’s wavy. The Earth passes through the mid-plane of the disc once every 30 million years.

I believe that the cycle of extinctions and impacts is related to times when the sun and planets plunge through the crowded disc of our galaxy. Normally, comets orbit the sun at the edge of the solar system, very far from the Earth. But when the solar system passes through the crowded disc, the combined gravitational pull of visible stars, interstellar clouds, and invisible dark matter disturbs the comets and sends some of them on alternate paths, sometimes crossing the Earth’s orbit, where they can collide with the planet.

Recognition of this 30 million-year galactic cycle is the key to understanding why extinctions happen on a regular schedule. But it may also explain other geologic phenomena as well. In further studies, we found that a number of geological events, including pulses of volcanic eruptions, mountain building, magnetic field reversals, climate, and major changes in sea level show a similar 30 million year cycle. Could this also be related to the way our solar system travels through the galaxy?

A possible cause of the geological activity may be interactions of the Earth with dark matter in the galaxy. Dark matter, which has never been seen, is most likely composed of tiny subatomic particles that reveal their presence solely by their gravitational pull.

And if you’re wondering about your own prospects for encountering this dark matter-driven phenomenon? We’re just passing through the galaxy’s dense disk within the last couple of million years, so a comet shower may be in the offing.

Michael Rampino is a professor of biology at New York University. This article  was previously published on TheConversation.com.