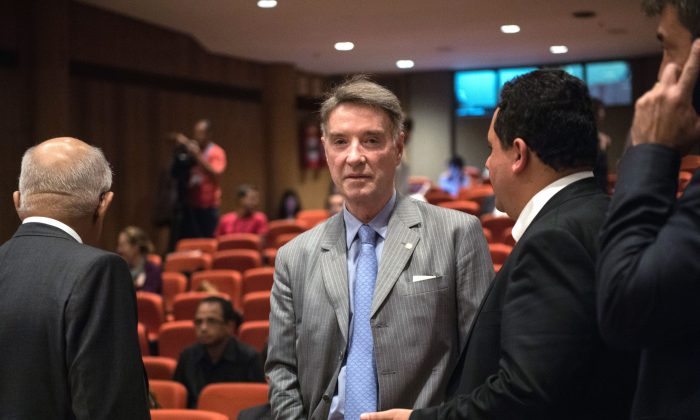 Brazilian businessman Eike Batista (C), once Brazil's richest man, talks with his lawyers during a break on the first day of his trial for alleged insider trading in Rio de Janeiro, Brazil, on November 18, 2014. (YASUYOSHI CHIBA/AFP/Getty Images)
News

How Can a Billionaire Go Bankrupt?

“I pointed to a homeless man and said: This guy is worth $900 million more than me,” said Donald Trump after the real estate bust in the early 1990s. Former number seven of the world’s richest people Eike Batista can soon say the same thing.

So how do billionaires go bankrupt? How did Eike Batista, now on trial in Brazil for insider trading, move from $35 billion to a negative net worth of $1 billion?

Yes, Batista made some horrible decisions with his oil exploration venture OGX, which invested heavily in exploration and production and never delivered. It has since filed for bankruptcy with billions of dollars in debt owed to international creditors, including many Wall Street and U.S. pension fund players.

However, looking at the ownership structure, Batista could have come out of the whole mess still a billionaire. According to Bloomberg estimates, he still had close to $1 billion in more or less liquid personal assets such as real estate and cash. However, most billionaire’s money is tied up in assets they don’t want to sell, like Batista’s commodity conglomerate EBX.

Because they don’t want to sell to spend their wealth, they borrow against the assets, sometimes with personal guarantees.

If he hadn’t pledged part of this fortune to debt holders in his companies such as the Abu Dhabi sovereign wealth fund Mubadala and Brazil’s development bank, he could have kept the majority of his liquid assets, because most of the debt was held at the company level.

However, high-rollers like Batista seldom think of the worst case scenario when things are going well. At the height of his success, he could borrow money easily both personally and for his companies, so that’s what he did. He needed the money for his extravagant lifestyle and the debt would be paid for by future proceeds from his companies.

Also he and his lenders were so confident in his success; his companies could load up with debt for projects which ultimately would not deliver. The problem with confidence is that is comes and goes rather quickly.

Once the key oil and gas exploration project OGX turned out to be a failure in late 2012, people also stopped believing in his other companies, which included mining and logistics. They started pulling out money hand over fist.

Then Batista made another mistake. In a failed bid to restore confidence, Batista started selling his personal assets to turn around his companies. He also pledged part of his personal fortune and told creditors he would repay “every penny.”

His companies didn’t turn around and are either in bankruptcy court or worth next to nothing and Batista is accused of having sold shares in OGX before the public found out the company wasn’t going to produce the amount of oil promised to investors.

This behavior is not rational but is a good example of relative psychology. A homeless person would take the $1 billion in assets and be very happy. But for someone who was once worth $35 billion, falling down to $1 billion hurts more than having nothing to begin with. So he will fight to the end and use all the resources at his disposal to avert failure.

Batista tried and failed. He is now worth less than a homeless person, taking inspiration in Trump, who despite all odds managed a comeback.