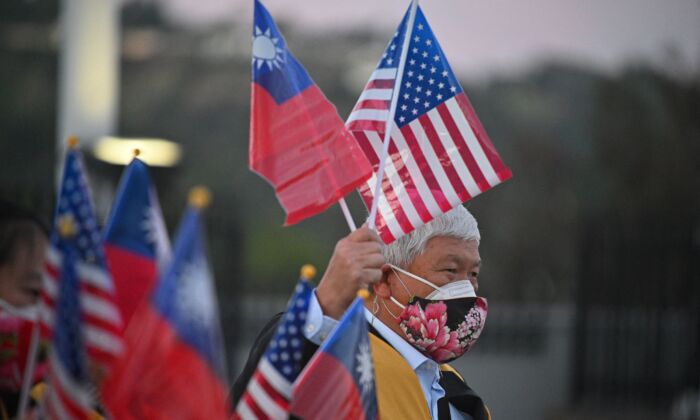 How California Can Help Taiwan Against China

“Great results can be achieved with small forces,” said Sun Tzu in “The Art of War.”

Although California is not a “nation state,” as Gov. Gavin Newsom likes to boast, it is the largest U.S. state and can do much to help Taiwan in its struggle against the People’s Republic of (Communist) China. Foreign policy should be left to the U.S. State Department for such things as coordinating trade policy. But much else can be done. Here are some suggestions, for both government and business, that build on California’s strengths.

1. Improve the state business climate, especially for manufacturing. California should encourage bringing manufacturing back from China. The original Apple Macintoshes were made in the company’s factory in Fremont. Now many of their devices are stamped with: “Designed by Apple in California Assembled in China.”

It should read, “Designed and Assembled by Apple in California.” Also, manufacturing jobs usually pay a lot more than other jobs, especially for workers with only a high-school education, fortifying the middle class.

To achieve this, California would have to cut taxes and start repealing many of the thousands of anti-business regulations on the books.

2. Allow complete school choice for education, as Arizona has done. According to a survey by World Population Review, California suffers the lowest literacy rate of any state. You can’t compete with Beijing when your workforce can’t read.

The obstacle, as to all education reform, remains the teachers’ unions. But unless they are tamed, the economy of California, and the United States, will struggle to achieve at the highest levels.

3. Rigorously enforce Proposition 209, which banned using affirmative action by state and local agencies. In 2020, voters, by 57 percent to 43 percent, rejected Proposition 16, which would have repealed Prop. 209. Despite that, politicians and bureaucrats keep trying to get around the clear letter of the law.

In March the Cal State system dropped using the SAT and ACT intelligence tests for admissions purposes. The University of California did the same thing last November. That means the quality of college students will drop, while the smartest students will be denied the opportunity of excelling.

These actions supposedly are intended to get around the “achievement gap” of low scores for black and Hispanic students. But all it does is cover up the incompetence of the K-12 public school system in teaching blacks and Hispanics, delaying needed reforms.

A couple of days ago I also wrote about the how California’s schools are failing the tech industry by teaching divisive ethnic studies programs and delaying the adoption of the California Math Framework. Along with strictly enforcing Prop. 209, such silliness needs to end.

4. Advance Mandarin language teaching in the schools. I brought this up in a previous article in The Epoch Times, pointing out, “Combining English, Mandarin, and Spanish comes to 3.4 billion speakers, or nearly half the people on the planet. What a benefit knowing those languages would be in business or any field.”

Let me add this: America’s intelligence agencies always are short of linguists, especially now of Mandarin analysts. They were 40 years ago when I was a Russian linguist in the U.S. Army.

With the Taiwan crisis heating up, it should be obvious more Mandarin speakers are needed by the National Security Agency, CIA, and the Commerce Department. California schools should take the lead in providing them.

5. Free speech on the internet. China has imposed a “social credit score,” which “ranks citizens and punishes them with throttled internet speeds and flight bans if the Communist Party deems them untrustworthy,” according to Business Insider.

Unfortunately, a similar system is being imposed in America, with disfavored people, such as former President Trump, banned from social media, and some people even banned from the banking system. On July 28, Twitter censored all content from the Epoch Times. But two days later, after a public outcry, it stopped the censorship. The uncertainty is chilling to free speech.

How can America stand as a bulwark of freedom if it’s imitating the worst features of the Chinese dictatorship? Free speech needs to be restored at all levels by all California companies.

6. Investigate corruption. California Attorney General Rob Bonta should investigate the suspicious activities surrounding Beijing and some politicians. One was a Chinese spy who was “by Senator Dianne Feinstein’s side for nearly 20 years,” CBS News reported in 2018.

Another was revealed by the Washington Post in 2020, “An alleged Chinese spy cozied up to a Democratic member of Congress and other politicians for years. The most prominent we know of is Rep. Eric Swalwell (D-Calif.) … Axios dug up Facebook photos of the woman, Fang Fang or Christine Fang, posing with Swalwell and other area politicians, including former members of Congress, at various political functions she regularly attended.”

According to the Eisner Gorin law group, “In California, espionage can also refer to any situation in which one entity obtains confidential information from another in an illicit manner.

“One law that governs some acts of corporate espionage is the Uniform Trade Secrets Act or similar legislation at Cal. Civil Code § § 3426-3426.11.

“If an individual receives a conviction for espionage, they can expect a sentence of many years in jail.”

7. Advance nuclear power. Weirdly, nuclear power in California is not defined as a “renewable,” athough it’s safe and produces no greenhouse gases. And even Gov. Gavin Newsom has backed extending the closure date of the Diablo Canyon nuke plant.

The Generation IV nuclear technology being developed is 100 percent safe because the reactors cannot melt down. California should get ready for it by declaring nuclear power a renewable, and promoting closed reactor locations—such as San Onofre in Orange County—as future locations for Gen IV reactors.

In addition to bringing Californians cheap energy, advancing Gen IV nukes would have other advantages vis-à-vis China. First, it would make us less dependent on electricity from windmills. According to EV Wind, “Seven of the top 10 wind turbine manufacturers are Chinese companies, with Goldwind of China in second place behind General Electric of the United States.”

Second, building Gen IV nuclear plants would advance that critical technology here at home against not only China, but other rivals such as Russia and France. The country of Chablis and brie actually should be our model. France gets 75 percent of its electric energy from nuclear plants. During the recent problems with Europe getting Russian oil and gas during the Ukraine War, France has come out best because it is close to independent in electricity production.

In conclusion, taking the above actions would both benefit Californians and help our friends in Taiwan. As Sun Tzu also said, “Opportunities multiply as they are seized.”