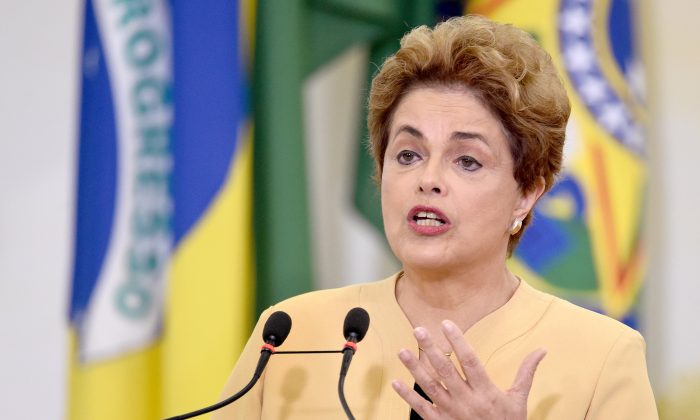 Brazilian President Dilma Rousseff delivers a speech during at the Planalto Palace in Brasilia on April 29, 2016. (Evaristo Sa/AFP/Getty Images)
News

After a brief intermission, Brazil’s gripping political drama is entering a new act. The Senate has chosen the members of a special commission that will decide whether to move forward with impeachment proceedings against President Dilma Rousseff, and the first hearings have begun.

Early projections suggest that the majority of the senate favors full impeachment. If a trial is launched to judge the merit of the case, Rousseff will be suspended for up to 180 days, and her vice-president and coalition partner, the PMDB party’s Michel Temer, will become the acting president.

If found guilty of the crimes of which she’s accused, Rousseff will be permanently removed from the presidency. If acquitted, she will return as president to finish her mandate—but with more than two thirds of the lower house having voted to investigate her, her position would be untenable.

If it comes off, this will be a spectacular feat of political assassination. When the lower house authorized the initiation of proceedings against Rousseff and sent the matter to the senate, it ostensibly did so based on “crimes of responsibility.” But these grounds were merely a technical necessity, offering Rousseff’s opponents what they had been looking for some time: a legal opportunity to remove an unpopular president.

The vote marked the culmination of what started as an improbable impeachment request that then developed into a national campaign. Millions of Brazilians have taken to the streets. Many demonstrations were also carried out to protest against the ousting of the president, seen by government supporters as a “white coup.”

This saga certainly has all the elements of a classic tragedy: the fatal flaw or weakness that ultimately leads to the hero’s downfall, the hero falling victim to manipulative characters and betrayed by those close to them. And most of all, this is not a sudden turn of events: the seeds of Rousseff’s downfall were planted a long time ago.

Doomed From the Start

Rousseff’s government has been embroiled in a fierce political dispute ever since the 2014 presidential elections, which her Workers’ Party (PT) won by a margin of only 3.3 percent. The opposition never fully accepted this result, and still claim the election was a fraud.

This was an inauspicious start to the center-left’s fourth consecutive term in power, which has left the public frustrated with its handling of the economy. And not without reason: in February, Brazil’s unemployment rate hit a record high of 10.2 percent, with an estimated 10.4 million people out of work.

This resentment turned to anger when it became clear that the government had used so-called “creative accounting” to delay scheduled debt payments and create a budget surplus—giving a falsely positive impression of the country’s financial situation.

That situation is not good. Brazil’s GDP shrank by 3.8 percent in 2015, and it’s expected to drop further in 2016. According to Goldman Sachs, Brazil is on track to record its deepest recession since 1901. As the private sector lost confidence in the president and her government, investments began to decline.

This all took place against the backdrop of a national ethical and moral crisis generated by several massive corruption scandals. Plea bargains in various cases revealed the involvement of politicians of Rousseff’s Workers’ Party (PT), as well as other parties, top executives of construction companies and Petrobras, Brazil’s state oil company. The corruption scandals whipped up public outrage at the government and the political establishment in general, egged on by a hostile campaign against the government in parts of the mainstream media.

Rousseff’s attempts to manage these problems and to put up a fight against the proceedings have come to little. She seems to be being consumed by her fatal flaw: political inexperience.

Be on Your Guard

Rousseff entered the 2010 presidential campaign with no previous electoral experience, and was perceived as vulnerable to other people’s scheming. All the way back in 2009, the historian Luiz Felipe Alencastro warned of a potential problem for the PT-PMDB coalition: the risk of having a much more experienced politician such as Temer as vice-president.

“It’s a partisan ticket of someone who knows everything and has under his command the largest number of seats in congress, with someone who has everything to learn,” said Alencastro. He pointed out that Temer could, in a moment of crisis, make a maneuver to push for a constitutional amendment to establish a parliamentary system in Brazil, under which he would be prime minister.

To make matters worse, Temer himself is hardly free from associations with corruption. One of the PT’s reasons for its original resistance to Temer as vice-president was his close ties to the lawmaker Eduardo Cunha, the current speaker of the lower house.

Cunha was already known back then in Congress for his voracity and his tricky ways of nabbing top government posts. Accused of hiding millions in offshore accounts and now under indictment by the Supreme Court, Cunha was instrumental in initiating the impeachment process. The government argues that he was out for revenge after the PT refused to support him at his expulsion proceedings before the Ethics Committee. If Temer becomes president, Cunha will technically become vice-president.

So one could argue that the prospect of a political takeover was right there from the start. When the right opportunity came, the plot for the downfall of a democratically elected president was set in motion and the likely culprits already cast in their roles.

There may be some improvised twists and turns yet to come, but Rousseff’s tragic political end has been foretold—and the script now seems complete.

Geraldo Cantarino is a Ph.D. candidate at Brazil Institute, King’s College London, in the U.K. This article was originally published on The Conversation.