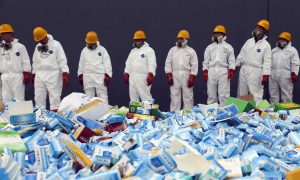 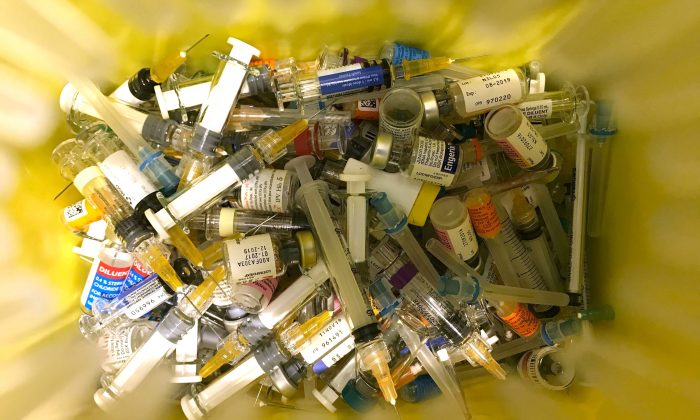 A container used for clinical waste is seen at a private clinic that performs vaccinations in Hong Kong on July 24, 2018. (ANTHONY WALLACE/AFP/Getty Images)
Viewpoints

How Biological Warfare and the Prescription-Drug Crisis Threaten All Americans

Americans risk being victimized by biological warfare because our leaders have carelessly allowed another world power to control our supply of medicines and much of the food we eat.

More than 90 percent of our prescription drugs are either manufactured in China or contain key ingredients that come from China, and China isn’t our best friend. Drugs on this Chinese-sourced list include antibiotics, birth control pills, cancer treatments, anti-depressants, statins (for high cholesterol), and HIV/AIDS drugs.

C’mon, in what universe does this make sense? This present-danger situation hampers the ability of President Donald Trump, in his trade negotiations, to protect our nation from seen and unforeseen threats.

Rosemary Gibson and her co-author, Janardan Prasad Singh, discuss some of these dangers in their book, “ChinaRx: Exposing the Risks of America’s Dependence on China for Medicine.” Similarly, Dr. Judy Stone, writing for Forbes Magazine, has raised the national-security issue, explaining that China, India, and Puerto Rico have benefited from the outsourcing of drug manufacture.

The profit motive has led drugmakers to focus on medicines that people need for chronic conditions, and diseases such as cancer, diabetes, and hypertension. She reports that many companies no longer develop or market antibiotics.

According to Stone, “As of 2008, the only big pharmaceutical makers with active antibacterial discovery programs were GlaxoSmithKline, Novartis, AstraZeneca, Merck, and Pfizer. Bristol-Myers Squibb dropped out in 2006.”

A few months ago, there was a crisis involving a massive recall of blood pressure medicine. CBS News Online reported that Valsartan, a commonly prescribed drug for hypertension, had been contaminated with a possible carcinogen.

In addition, CBS reported, “A Chinese manufacturer was the source of contaminated heparin—a commonly used blood thinner—that killed at least 81 people in 2007 and 2008. An FDA inspection showed that the Chinese factory where the contaminated product was made had serious deficiencies in what’s known as good manufacturing practice.”

We can blame Congress for setting up the conditions that have led to an untenable situation, in which China is the world’s go-to source of antibiotics. Follow the money to the campaign coffers of our national leaders. Members of Congress and their corporate donors are directly responsible for drug shortages, health care unaffordability, and the nation’s vulnerability when it comes to dependence on foreign-made drugs and ingredients.

The safety problems and national-security risks for Americans unwittingly being used as cannon fodder in this biological warfare should be a five-alarm wakeup call for lawmakers. Right now, we can’t trust Congress. They sold us out. Our lawmakers would rather grandstand than take protective actions.

We the People must arm ourselves with knowledge, and align with groups and individuals seeking to establish the conditions that would allow companies right here in the United States to profitably make the drugs we need to stay alive.

Where to begin? Start by working with Trump in collaboration with the doctors and health care officials who have been sounding an alarm that not enough people hear. Resource groups include Physicians for Reform, Doctors for Patient Care Foundation, and Practicing Physicians of America.

This critical issue is on my radar. A couple of weeks ago, in an article I wrote for The Epoch Times, I discussed rising health care costs. We have a health care system that allows legal kickbacks and rebates that drive up costs and force small companies to close.

Congress created the problem in 1987. That’s when it “allowed lobbyists to insert a paragraph into the 1987 Medicare/Medicaid reform bill that created the Medicare anti-kickback statute, which created a safe harbor, exempting and allowing a handful of GPOs (middlemen) to control billions of dollars of generic drugs, medical equipment, and supplies such as the IV saline solution that is used by 5,000 U.S. hospitals and medical facilities.”

The safe-harbor exemption for GPOs is part of the problem. An even greater problem pertains to prescription drug costs and supplies created by a #MeToo exemption for drug companies. In 2003, Big Pharma got their own version of a “safe harbor” when the Department of Health and Human Services (HHS) allowed the creation of pharmacy benefit managers (PBM).

These middlemen have driven up the costs of the drugs that chronically ill Americans need to stay alive. (The website NoMiddlemen.org has a great video to watch explaining this issue.)

Congress is selling out the interests of the American people. Rather than focusing on pie-in-the-sky proposals such as Medicare for All (which would certainly destroy the program established for seniors and lead to inferior health care for all), the Democratic-led House of Representatives needs to work with the Senate to change the incentive structure that has created the dependence on China and India, while driving small suppliers and drug manufacturers out of business.

In addition, HHS should immediately revoke any rules and regulations that enable PBMs and GPOs to conduct legalized racketeering. We the People must demand accountability from our leaders, insist on transparency, and expose the shenanigans that have placed our lives at risk.

Dr. Carol M. Swain is a former tenured professor at Vanderbilt and Princeton universities. Her Be The People News blog and podcast empower individuals to think independently, understand their responsibility, and make a difference in the world.