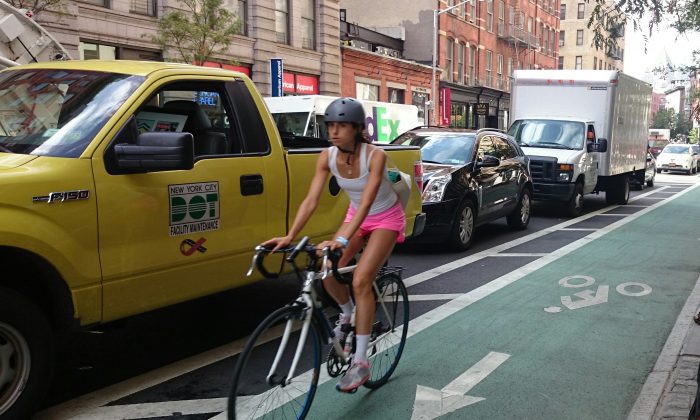 How Bike-Friendly is Your City? NYC Beats Out Minneapolis and Portland 2014

NEW YORK—Political support and widespread advocacy have pushed New York City up the ranks to top Bicycling magazine’s list of U.S. cycling cities. The ranking process is an exhaustive one that takes two years, said Bill Strickland, editor-in-chief of Bicycling, and everything from activity to safety, infrastructure, and the city’s plans for the future are taken into consideration. In 2012, New York City placed seventh on the list. Now, Strickland says, “New York City is a model of what urban cities must do to stay viable.”The city now has 340 miles of bike lanes (map) and plans to add 50 more mile next year, including 5 miles of protected lanes. According to the Department of Transportation 342,000 daily bike trips are made in the city, and 54,000 of the trips are to and from work. At a press conference Wednesday, Strickland joined DOT, Transportation Alternatives, and Bike New York to make the announcement. Strickland said New York City making the top spot had been a surprise to many cycling enthusiasts, as many think of Portland as a cycling paradise. For New Yorkers who have seen the number of cyclists rise throughout the city with the introduction of CitiBike, it seemed almost a given.“I am not surprised,” said Transportation Commissioner Polly Trottenberg. “Let’s face it, [cycling] brings a lot of joy and happiness.”“This is huge,” said Ken Podziba, president of Bike New York, a nonprofit promoting bicycling and education. “I had hoped, but I didn’t think it would really happen.”

“There has been a huge cultural shift,” Podziba said. “Fifteen years ago there was one guy who would ride to work and he was that weird guy in the corner no one wanted to talk to. … Now it’s not just popular, it’s cool.”According to DOT, cycling numbers have increased by 9 percent from 2012-2013 alone. From 2003-2009, there was a 31 percent increase in the amount of cyclists.There is safety in numbers, and with the dramatic increase of cyclists, the risk of injuries has also dropped—by 74 percent from 2001-2013.CitiBike is set for expansion next year as well, Trottenberg said. Alta Bike Share, the bike share management company, and REQX Ventures are still working out an agreement for an investment that would allow the bike share program to expand. The mayor has tasked DOT with expanding bike share to all five boroughs, and increasing bicycling as a way of commuting to and from work to 6 percent of all trips.Bike infrastructure—painted and protected bike lanes, CitiBike, bike corrals—is expanding, but Podziba says people should not be afraid to ride in the street even when there is no bike lane. Fear creates a big barrier, Podziba explains, and Bike New York tries to teach people how to ride bikes on the streets of New York without being afraid. A cyclist who is afraid is prone to making more mistakes, putting themselves and others on the road in danger, he said. But when they follow the traffic rules and ride confidently, it sets a good example.“I want it to be unthinkable to go through a red light, ride on a sidewalk, that kind of thing,” Podziba said. “It should be socially unacceptable.”The next plateau bicycling will have to conquer is following the rules, Podziba said with a laugh. Ridership is increasing, but following the rules will make it safer for everyone.Some cyclists said while not everyone on the road embraces sharing the street with people on bikes, the administration’s focus on safety has helped ease the us-versus-them narrative.

Coinciding with the city rankings, DOT released new street safety statistics Wednesday.Protected bike lanes reduce injuries for all roadway users by nearly 20 percent, Trottenberg said, whether or not they’re bicycling. DOT studied 7 miles of bike paths over three years and found that even though the number of cyclists increased dramatically, cycling injuries actually decreased a little. For pedestrians, injuries dropped by 22 percent. The lanes usually inspired quality-of-life enhancements whether it be city initiated or by a local business improvement district. On average, crossing corridors were shortened from 17-30 inches in the studied bike lane areas. For drivers, there was little impact to vehicle travel times. There was no negative impact and usually a slight improvement in travel times. On 8th Avenue travel times improved by 14 percent.