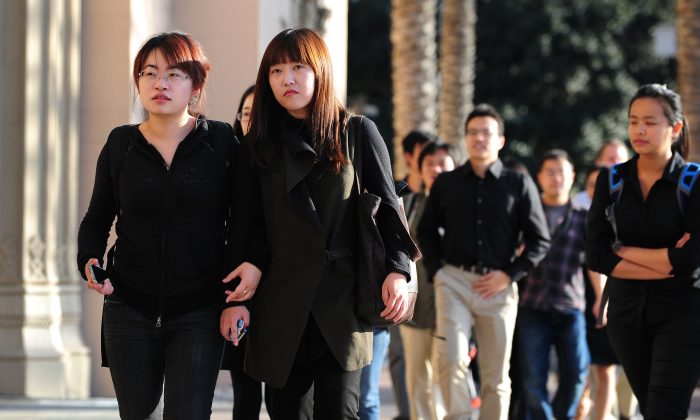 Beijing Seeks to Influence Overseas Talent Who Return to China

A series of documents obtained by The Epoch Times gives a glimpse into how the association keeps track of returnees in the hopes of recruiting them to assist in Beijing’s economic pursuits.

According to its own website, the WRSA, founded in 1913, is a national association of Chinese who returned from overseas. It is overseen by the Secretariat of the CCP’s Central Committee and under the guidance of the United Front Work Department, an agency tasked with influencing people domestic and abroad to support the Party’s agenda.

The website also claims that the WRSA is “a bridge between the Party and overseas students and scholars, an assistant in the work of the Party and government, and a warm home [for returnees].”

There are WRSA branches at the provincial, city, and county levels—with associations set up in different locales for alumni of Western universities who currently work or reside there.

According to the WRSA website, it has 42 local organizations and 15 national chapters, with more than 220,000 individual members. It also keeps “close contact” with more than 100 associations for Chinese overseas scholars in top destination countries for Chinese students.

Recently, The Epoch Times obtained the opening remarks of a WRSA meeting in Nanyang city, Henan Province held on Oct. 27, 2019. The speech was delivered by Liu Shuhua, director of the Nanyang United Front Work Department.

Liu asked the Nanyang WRSA division to actively engage in developing Party members and to “connect with overseas students, experts, scholars, entrepreneurs, and people from all walks of life, and attract returnees for business and development in Nanyang.”

The WRSA was founded in 1913, prior to the CCP takeover of China. After the CCP won the civil war in 1949, the United Front Work Department was established as a central department that directly reports to the Central Committee, made up of the Party’s senior officials. Under the department, local bureaus and branches were set up in provinces and various business sectors.

During the Cultural Revolution of the 1960s and 1970s, when intellectuals were branded “anti-revolutionaries,” many prominent Chinese scholars died from persecution or committed suicide. The WRSA laid low during this time.

In 1982, the WRSA resumed its operations and became part of Beijing’s United Front, just as the Chinese regime began to embrace economic reforms.

Liu said in his speech at the 2019 meeting that “implementing decisions by the central, provincial, and municipal party committees regarding those who studied abroad is the new focus of united front work.”

This new focus was confirmed by another document in Oct. 2019 titled, “Data on returnees who studied abroad who are currently in Nanyang city.” A total of 343 returnees were listed in the document with detailed descriptions of their professions.

On May 12, 2016, the CCP’s General Office of the Central Committee issued a directive called, “opinions on strengthening the construction of the WRSA.”

The directive pointed out WRSA’s major roles: to establish a database of returnees and “make use” of these students’ situation in a timely manner; create a new type of think tank reflecting the characteristics of overseas scholars; and to use these people to carry out “civilian diplomacy” and serve the Belt and Road Initiative. Rolled out in 2013, the Belt and Road is the Chinese regime’s infrastructure financing project to build a Beijing-centric trade network stretching across Southeast Asia, Africa, and Europe.

Officials and experts have criticized the Belt and Road for trapping developing countries under heavy debt—which could pressure them into supporting Beijing’s policies.

Twitter board member and former Google AI chief Li Fei-Fei has ties to the CCP and the WRSA.

Controversy surrounding Twitter flared up when Li was appointed to the company’s board of directors. On May 20, a petition was created on the White House website to “call for a thorough investigation on Twitter’s violation of freedom of speech.”

In 2017, Li was awarded the Top Ten Female Figures award by the CCP. The award was also given to the notorious Hong Kong Chief Executive Carrie Lam that year.

At the beginning of 2017, Li joined Google Cloud as chief scientist. And at the Google Developer Conference in Shanghai in December of the same year, she announced that Google would return to Beijing to establish the AI research lab. A subsequent announcement stated that a cooperative relationship would be established with Tsinghua University Institute for Artificial Intelligence (Tsinghua AI), funded by the Chinese military.

Li is closely connected with the “Future Forum,” a Beijing-based agency that states its mission is to “transform the future through science.” According to the Future Forum’s 2017 official website, Li was a member of the Science Committee.

Also on the Future Forum faculty and members list was the distinguished quantum physicist and Stanford University professor Zhang Shoucheng who was listed as a council member. Zhang is said to have committed suicide on Dec. 1, 2018 when his company, Digital Horizon Capital (DHVC), previously known as Danhua Capital, was identified as part of a major Chinese infiltration effort into Silicon Valley, according to U.S. Trade Representative Robert Lighthizer’s report on China, which was released just days before Zhang’s death.

According to the Future Forum website, the agency was founded in 2015 under the guidance of the China Association for Science and Technology and the support from the Chaoyang district government of Beijing. State-run media sponsors of the agency included People’s Daily, Xinhua News Agency, as well as China’s three major web portals.

The 2017 Convention on Exchange of Overseas Talents and the 19th Guangzhou Convention of Overseas Chinese Scholars in Science and Technology was coordinated by the WRSA, along with the Center for China and Globalization (CCG) and the Overseas Chinese Affairs Office of the State Council (OCAO). Zhang Shoucheng and Li were both present as part of the top 50 elected outstanding members in 2017.

Li was also an invited guest at an event called the “Chinese Returned Scholars Innovation and Entrepreneurship Forum to Review 40 Years of Reform and Opening-up Policy” held on Aug. 19, 2018 in Beijing.

Must Support the Party

According to a document titled “Preparations for Establishing the WRSA, Nanyang Division” issued on Oct. 25, 2019, of the more than 340 returnee students in the city, 129 are CCP members.

These internal documents also show candidates for the WRSA director position must show that they toe the Party line.

For instance, Zhang Yin, vice president of the Henan University of Engineering, was a candidate. He is also a member of the standing committee that oversees a Party advisory body called the Chinese People’s Political Consultative Conference.

Once a visiting scholar at Louisiana State University, Zhang is described in the document as having a “firm political stance, outstanding work performance, and strong ability to participate in and discuss politics.”